Pitch accent is a term used in autosegmental-metrical theory for local intonational features that are associated with particular syllables. Within this framework, pitch accents are distinguished from both the abstract metrical stress and the acoustic stress of a syllable. Different languages specify different relationships between pitch accent and stress placement.

This model of pitch accent structure differs from that of the British School, which described pitch accents in terms of 'configurations' like rising or falling tones.[3] It also differs from the American Structuralists' system, in which pitch accents were made up of some combination of low, mid, high, and overhigh tones.[4] Evidence favoring the two-level system over other systems includes data from African tone languages and Swedish. One-syllable words in Efik (an African tone language) can have high, low, or rising tones, which would lead us to expect nine possible tone combinations for two-syllable words. However, we only find H-H, L-L, and L-H tone combinations in two-syllable words. This finding makes sense if we consider the rising tone to consist of an L tone followed by an H tone, making it possible to describe one- and two-syllable words using the same set of tones.[2] Bruce also found that alignment of the peak of a Swedish pitch accent, rather than the alignment of a rise or fall, reliably distinguished between the two pitch accent types in Swedish.[5] Systems with several target levels often over-predict the number of possible combinations of pitch targets.

Within autosegmental-metrical theory, pitch accents are combined with edge tones, also known as boundary tones, which mark the beginnings and/or ends of prosodic phrases, to determine the intonational contour of a phrase. The need for pitch accents to be distinguished from edge tones can be seen in contours (1) and (2) in which the same intonational events - an H* pitch accent followed by an L- phrase accent and a H% boundary tone - are applied to phrases of different lengths. Note that in both cases, the pitch accent remains linked to the stressed syllable and the edge tone remains at the end of the phrase. Just as the same contour can apply to different phrases (e.g. (1) and (2)), different contours can apply to the same phrase, as in (2) and (3). In (3) the H* pitch accent is replaced with an L* pitch accent. 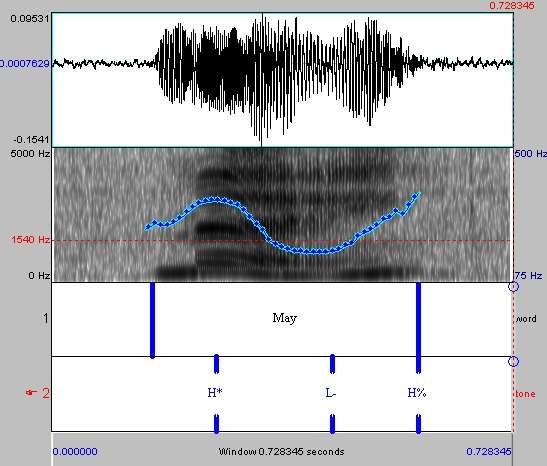 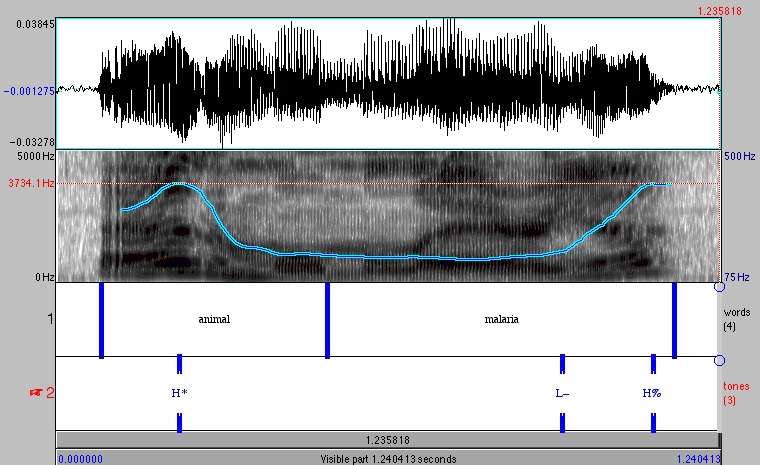 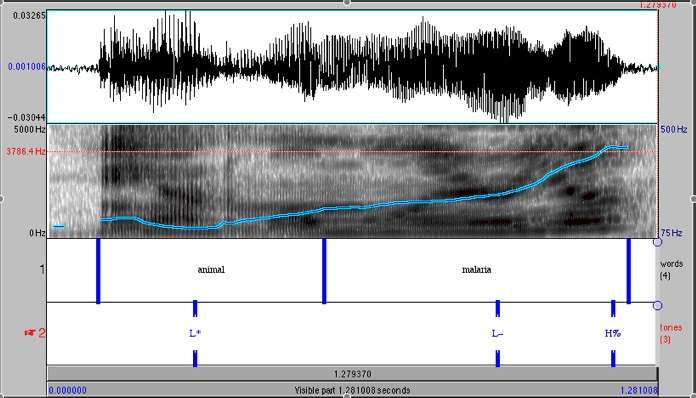 Pitch accents in English serve as a cue to prominence, along with duration, intensity, and spectral composition. Pitch accents are made up of a high (H) or low (L) pitch target or a combination of an H and an L target. The pitch accents of English used in the ToBI prosodic transcription system are: H*, L*, L*+H, L+H*, and H+!H*.[7]