Tone sandhi is a phonological change occurring in tonal languages, in which the tones assigned to individual words or morphemes change based on the pronunciation of adjacent words or morphemes.[1] It usually simplifies a bidirectional tone into a one-direction tone.[2] It is a type of sandhi, or fusional change, from the Sanskrit word for "joining".

Tone sandhi occurs to some extent in nearly all tonal languages, manifesting itself in different ways.[3] Tonal languages, characterized by their use of pitch to affect meaning, appear all over the world, especially in the Niger-Congo language family of Africa, and the Sino-Tibetan language family of East Asia,[1] as well as other East Asian languages such as Tai-Kadai, Vietnamese, and Papuan languages. Tonal languages are also found in many Oto-Manguean and other languages of Central America,[1] as well as in parts of North America (such as Athapaskan in British Columbia, Canada),[4] and Europe.[1]

Many North American and African tonal languages undergo "syntagmatic displacement," as one tone is replaced by another in the event that the new tone is present elsewhere in the adjacent tones. Usually, these processes of assimilation occur from left to right. In the Bantu languages of West Africa, for example, an unaccented syllable takes the tone from the closest tone to its left.[2] However, in East and Southeast Asia, "paradigmatic replacement" is a more common form of tone sandhi, as one tone changes to another in a certain environment, whether or not the new tone is already present in the surrounding words or morphemes.[3]

Many languages spoken in China have tone sandhi, some of it quite complex.[1] Southern Min (Minnan), which includes Hokkien, Taiwanese, and Teochew, has a complex system, with in most cases every syllable changing into a different tone, and which tone it turns into depending on the final consonant of the syllable that bears it. 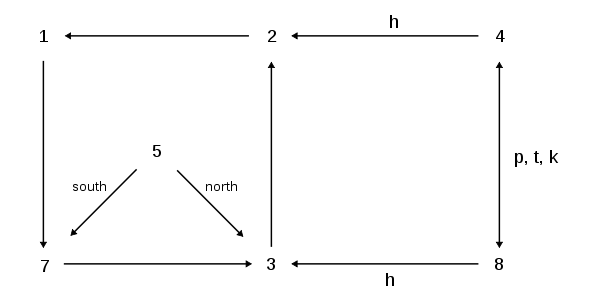 Taiwanese tones in isolation, and the changes they undergo when they precede another tone.

The Amoy, the prestige dialect of Hokkien, has five tones, which are reduced to two in checked syllables (which end in a stop consonant—these are numbered 4 and 8 in the diagram above). Within a phonological word, all syllables but the last change tone. Among unchecked syllables (that is, those that do not end in a stop), tone 1 becomes 7, 7 becomes 3, 3 becomes 2, and 2 becomes 1. Tone 5 becomes 7 or 3, depending on dialect. Stopped syllables ending in /p/, /t/, or /k/ take the opposite tone (phonetically, a high tone becomes low, and a low tone becomes high), whereas syllables ending in a glottal stop (written h in the diagram above) drop their final consonant to become tone 2 or 3.

The seven or eight tones of Hmong demonstrate several instances of tone sandhi. In fact the contested distinction between the seventh and eighth tones surrounds the very issue of tone sandhi (between glottal stop (-m) and low rising (-d) tones). High and high-falling tones (marked by -b and -j in the RPA orthography, respectively) trigger sandhi in subsequent words bearing particular tones. A frequent example can be found in the combination for numbering objects (ordinal number + classifier + noun): ib (one) + tus (classifier) + dev (dog) > ib tug dev (note tone change on the classifier from -s to -g).

What is and is not tone sandhi

Tone sandhi is compulsory as long as the environmental conditions that trigger it are met. It is not to be confused with tone changes that are due to derivational or inflectional morphology. For example, in Cantonese, the word "sugar" (糖) is pronounced tòng (/tʰɔːŋ˨˩/ or /tʰɔːŋ˩/, with low (falling) tone), whereas the derived word "candy" (also written 糖) is pronounced tóng (/tʰɔːŋ˧˥/, with mid rising tone). Such a change is not triggered by the phonological environment of the tone, and therefore is not an example of sandhi. Changes of morphemes in Mandarin to the neutral tone are also not examples of tone sandhi.

In Hokkien (Taiwanese), the words kiaⁿ (high tone, meaning "afraid") and lâng (curving upward tone, meaning "person") combine to form two different compound words with different tones. When combined via sandhi rules, kiaⁿ is spoken in basic tone and lâng in original tone (written in POJ as kiaⁿ-lâng). This means "frightfully dirty" or "filthy". This follows the basic tone sandhi rules. However, when kiaⁿ is spoken in original high tone, and lâng rendered in low tone (written kiaⁿ--lâng), it means "frightful". This derivational process is distinct from the semantically empty change of tone that automatically occurs when kiaⁿ is followed by lâng, and so is not tone sandhi.

Zapotec, an Oto-Manguean language (or group of closely related languages) spoken in Mexico, has three tones: high, middle and low. The three tones, along with separate classifications for morpheme categories, contribute to a somewhat more complicated system of tone sandhi than in Mandarin. There are two main rules for Zapotec tone sandhi, which apply in this order:

Molinos Mixtec, another Oto-Manguean language, has a much more complicated system of tone sandhi. The language has three tones (high, mid, or low, or 1, 2, or 3, respectively), and all roots are disyllabic, meaning that there are nine possible combinations of tones for a root or "couplet". The tone combinations are expressed here as a two digit number (high-low is represented as 13). Couplets are also classified into either class A or B, as well as verb or non-verb. A number of specific rules depending on these three factors determine tone change. One example of a rule follows:[6]

Akan, a Niger-Congo language spoken in Ghana, has two tones: high and low. The low tone is default.[7] In Akan, tones at morpheme boundaries assimilate to each other through tone sandhi, the first tone of the second morpheme changing to match the final tone of the first morpheme.