Not to be confused with Plastic (film). 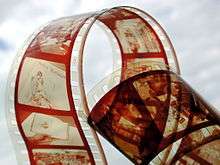 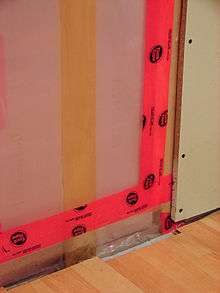 Plastic film is a thin continuous polymeric material. Thicker plastic material is often called a “sheet”. These thin plastic membranes are used to separate areas or volumes, to hold items, to act as barriers, or as printable surfaces.

Almost all plastics can be formed into a thin film. Some of the primary ones are: 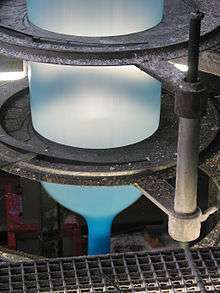 A tube of extruded film being blown to expand

Plastic films are usually thermoplastics and are formed by melting for forming the film.

Plastic films are typically formed into rolls by roll slitting. Often additional coating or printing operations are also used. Films can be modified by physical vapor deposition to make metallised films. Films can be subjected to corona treatment or Plasma processing; films can have release agents applied as needed.

This article is issued from Wikipedia - version of the 2/28/2015. The text is available under the Creative Commons Attribution/Share Alike but additional terms may apply for the media files.