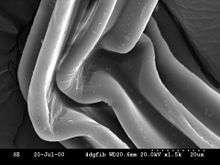 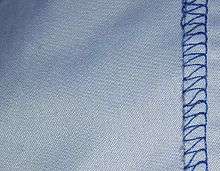 Close-up of a polyester shirt 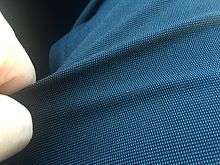 Polyester is a category of polymers that contain the ester functional group in their main chain. As a specific material, it most commonly refers to a type called polyethylene terephthalate (PET). Polyesters include naturally occurring chemicals, such as in the cutin of plant cuticles, as well as synthetics through step-growth polymerization such as polybutyrate. Natural polyesters and a few synthetic ones are biodegradable, but most synthetic polyesters are not. This material is used very widely in clothing.

Depending on the chemical structure, polyester can be a thermoplastic or thermoset. There are also polyester resins cured by hardeners; however, the most common polyesters are thermoplastics.[1]

Fabrics woven or knitted from polyester thread or yarn are used extensively in apparel and home furnishings, from shirts and pants to jackets and hats, bed sheets, blankets, upholstered furniture and computer mouse mats. Industrial polyester fibers, yarns and ropes are used in tyre reinforcements, fabrics for conveyor belts, safety belts, coated fabrics and plastic reinforcements with high-energy absorption. Polyester fiber is used as cushioning and insulating material in pillows, comforters and upholstery padding. Polyester fabrics are highly stain-resistant— in fact, the only class of dyes which can be used to alter the color of polyester fabric are what are known as disperse dyes.[2]

Polyester fibers are sometimes spun together with natural fibers to produce a cloth with blended properties. Cotton-polyester blends (polycotton) can be strong, wrinkle and tear-resistant, and reduce shrinking. Synthetic fibers in polyester also create materials with water, wind and environmental resistance compared to plant-derived fibers. Cons of cotton and polyester blends include being less breathable than cotton and trapping more moisture while sticking to the skin. They are also less fire resistant and can melt when ignited.[3]

Polyester blends have been renamed so as to suggest their similarity or even superiority to natural fibers (for example, China silk, which is a term in the textiles industry for a 100% polyester fiber woven to resemble the sheen and durability of insect-derived silk).

Polyesters are also used to make bottles, films, tarpaulin, canoes, liquid crystal displays, holograms, filters, dielectric film for capacitors, film insulation for wire and insulating tapes. Polyesters are widely used as a finish on high-quality wood products such as guitars, pianos and vehicle/yacht interiors. Thixotropic properties of spray-applicable polyesters make them ideal for use on open-grain timbers, as they can quickly fill wood grain, with a high-build film thickness per coat. Cured polyesters can be sanded and polished to a high-gloss, durable finish.

Liquid crystalline polyesters are among the first industrially used liquid crystal polymers. They are used for their mechanical properties and heat-resistance. These traits are also important in their application as an abradable seal in jet engines.

Polyesters as thermoplastics may change shape after the application of heat. While combustible at high temperatures, polyesters tend to shrink away from flames and self-extinguish upon ignition. Polyester fibers have high tenacity and E-modulus as well as low water absorption and minimal shrinkage in comparison with other industrial fibers.

According to the composition of their main chain, polyesters can be:

Polyesters can also be telechelic oligomers like the polycaprolactone diol (PCL) and the polyethylene adipate diol (PEA). They are then used as prepolymers.

Polyester is a synthetic polymer made of purified terephthalic acid (PTA) or its dimethyl ester dimethyl terephthalate (DMT) and monoethylene glycol (MEG). With 18% market share of all plastic materials produced, it ranges third after polyethylene (33.5%) and polypropylene (19.5%).

The main raw materials are described as follows:

In 2008, about 10,000 tonnes Sb2O3 were used to produce around 49 million tonnes polyethylene terephthalate.

Polyester is described as follows:

There are several reasons for the importance of polyester:

A comparable small market segment (much less than 1 million tonnes/year) of polyester is used to produce engineering plastics and masterbatch.

In order to produce the polyester melt with a high efficiency, high-output processing steps like staple fiber (50–300 tonnes/day per spinning line) or POY /FDY (up to 600 tonnes/day split into about 10 spinning machines) are meanwhile more and more vertically integrated direct processes. This means the polymer melt is directly converted into the textile fibers or filaments without the common step of pelletizing. We are talking about full vertical integration when polyester is produced at one site starting from crude oil or distillation products in the chain oil → benzene → PX → PTA → PET melt → fiber/filament or bottle-grade resin. Such integrated processes are meanwhile established in more or less interrupted processes at one production site. Eastman Chemicals were the first to introduce the idea of closing the chain from PX to PET resin with their so-called INTEGREX process. The capacity of such vertically integrated production sites is >1000 tonnes/day and can easily reach 2500 tonnes/day.

Besides the above-mentioned large processing units to produce staple fiber or yarns, there are ten thousands of small and very small processing plants, so that one can estimate that polyester is processed and recycled in more than 10 000 plants around the globe. This is without counting all the companies involved in the supply industry, beginning with engineering and processing machines and ending with special additives, stabilizers and colors. This is a gigantic industry complex and it is still growing by 4–8% per year, depending on the world region.

In this classical method, an alcohol and a carboxylic acid react to form a carboxylic ester. To assemble a polymer, the water formed by the reaction must be continually removed by azeotrope distillation.

The acid begins as an acid chloride, and thus the polycondensation proceeds with emission of hydrochloric acid (HCl) instead of water. This method can be carried out in solution or as an enamel.

Aliphatic polyesters can be assembled from lactones under very mild conditions, catalyzed anionically, cationically or metallorganically. A number of catalytic methods for the copolymerization of epoxides with cyclic anhydrides have also recently been shown to provide a wide array of functionalized polyesters, both saturated and unsaturated.

The futuro house was made of fibreglass-reinforced polyester plastic; polyester-polyurethane, and poly(methylmethacrylate) one of them was found to be degrading by Cyanobacteria and Archaea.[4][5]

Unsaturated polyesters are thermosetting resins. They are generally copolymers prepared by polymerizing one or more diol with saturated and unsaturated dicarboxylic acids (maleic acid, fumaric acid...) or their anhydrides. The double bond of unsaturated polyesters reacts with a vinyl monomer, usually styrene, resulting in a 3-D cross-linked structure. This structure acts as a thermoset. The exothermic cross-linking reaction is initiated through a catalyst, usually an organic peroxide such as methyl ethyl ketone peroxide or benzoyl peroxide.

Pollution of freshwater and seawater habitats

A team at Plymouth University in the UK spent 12 months analysing what happened when a number of synthetic materials were washed at different temperatures in domestic washing machines, using different combinations of detergents, to quantify the microfibres shed. They found that an average washing load of 6 kg could release an estimated 137,951 fibres from polyester-cotton blend fabric, 496,030 fibres from polyester and 728,789 from acrylic.[6][7][8]