For other uses, see Plat (disambiguation).

A plat map that shows the location of a lot for sale.

A plat (/ˈplæt/[1] or /ˈplɑːt/)[2] in the United States (plan or cadastral map) is a map, drawn to scale, showing the divisions of a piece of land. United States General Land Office surveyors drafted township plats of Public Lands Surveys to show the distance and bearing between section corners, sometimes including topographic or vegetation information. City, town or village plats show subdivisions into blocks with streets and alleys. Further refinement often splits blocks into individual lots, usually for the purpose of selling the described lots; this has become known as subdivision.

After the filing of a plat, legal descriptions can refer to block and lot-numbers rather than portions of sections.[3] In order for plats to become legally valid, a local governing body, such as a public works department, urban planning commission, or zoning board must normally review and approve them.

A plat of consolidation or plan of consolidation originates when a landowner takes over several adjacent parcels of land and consolidates them into a single parcel. In order to do this, the landowner will usually need to make a survey of the parcels and submit the survey to the governing body that would have to approve the consolidation.[4]

A plat of subdivision or plan of subdivision appears when a landowner or municipality divides land into smaller parcels. If a landowner owns an acre of land, for instance, and wants to divide it into three pieces, a surveyor would have to take precise measurements of the land and submit the survey to the governing body, which would then have to approve it.[5] A plat of subdivision also applies when a landowner/building owner divides a multi-family building into multiple units. This can apply for the intention of selling off the individual units as condominiums to individual owners.

A short plat is the plat of a so-called "short subdivision" of land into no more than four parcels (or up to nine within an urban growth boundary, depending on local regulations)[6] in the State of Washington, which provides for a more summary process for approval of such subdivisions.[7]

A correction plat or amending plat records minor corrections to an existing plat, such as correcting a surveying mistake or a scrivener's error. Such plats can sometimes serve to relocate lot-lines or other features, but laws usually tightly restrict such use.[8]

A vacating plat functions to legally void a prior plat or portion of a plat. The rules normally allow such plats only when all the platted lots remain unsold and no construction of buildings or public improvements has taken place. 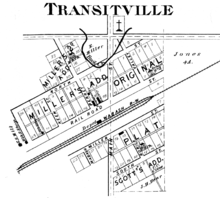 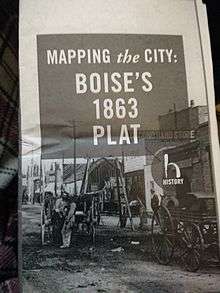 A pamphlet for a walking tour of Boise's original ten blocks.

The creation of a plat map marks an important step in the process of incorporating a town or city according to United States law. Because the process of incorporation sometimes occurred at a courthouse, the incorporation papers for many American cities may be stored hundreds of miles away in another state. For example, to view the original General Land Office plat for the city of San Francisco, California, filed in 1849, one must visit the Museum of the Oregon Territory in Oregon City, Oregon, as at that time Oregon City was the site of the closest federal land office to San Francisco.