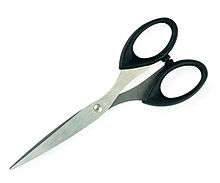 The English phrase pair of scissors names a single object.

A plurale tantum (Latin for "plural only", plural form: pluralia tantum) is a noun that appears only in the plural form and does not have a singular variant for referring to a single object. In a less strict usage of the term, it can also refer to nouns whose singular form is rarely used.

In English pluralia tantum are frequently words which denote objects that occur or function as pairs or sets, such as spectacles, trousers, pants, scissors, clothes, electronics, bagpipes, or genitals. However, this is not the case for all languages. In some languages they refer to points or periods of time (for example, Latin kalendae "calends, the first day of the month", German Ferien "vacation, holiday") or to events (for example, Finnish häät "wedding"). In some cases there is no obvious semantic reason for a particular noun to be plurale tantum. Hebrew mayim "water", Dutch hersenen "brain", Swedish pengar and Russian den'gi [деньги] "money" are pluralia tantum.

A bilingual example is the Latin word fasces, which was brought into English; when referring to the symbol of authority, it is a plurale tantum noun in both languages.[1]

In English, some plurale tantum nouns have a singular form, used only attributively. Phrases such as "trouser presses" and "scissor kick" contain the singular form, but it is considered nonstandard to say "a trouser" or "a scissor" on their own. That accords with the strong preference for singular nouns in attributive positions in English, but some words are used in the plural form even as attributive nouns (such as "clothes peg", "glasses case").

In English, a word may have definitions which are pluralia tantum. The noun "glasses" (corrective lenses to improve eyesight) is plurale tantum. The word "glass" (a container for drinks) may be singular or plural. In most forms of English, quantifying a plurale tantum noun requires a measure word: "one pair of scissors" instead of "one scissors". Some words, such as "brain" and "intestine", can be used as either pluralia tantum or as count nouns.

The term for a noun which appears only in the singular form is singulare tantum (plural: singularia tantum) like the English words "information", "dust", and "wealth". Singulare tantum is defined by the Shorter Oxford English Dictionary as "Gram. A word having only a singular form; esp. a non-count noun."[2] Such nouns may refer to a unique singular object (essentially a proper noun), but more often than not, they refer to uncountable nouns, either mass nouns (referring to a substance which cannot be counted as distinct objects like "milk") or collective nouns (referring to objects which may in principle be counted but are referred to as one like Arabic tut "strawberry"). Given that they do not have a number distinction, they may appear as singulare tantum in one language but as plurale tantum in another. Compare English "water" to Hebrew plurale tantum mayim.

In English, such words are almost always mass nouns. Some uncountable nouns can be alternatively used as count nouns when meaning "a type of", and the plural means "more than one type of". For example, strength is uncountable in Strength is power, but it can be used as a countable noun to mean type of strength as in My strengths are in physics and chemistry. Some words, especially proper nouns such as the name of an individual, are nearly always in the singular form because there is only one example of what that noun means.

Usage in other languages

Pluralia tantum vary arbitrarily between languages. For example, Swedish en sax ("a pair of scissors") is not a plurale tantum, unlike the English equivalent (scissors).

In some other languages, rather than quantifying a plurale tantum noun with a measure word, special numeral forms are used in such cases. In Polish, for example, "one pair of eyeglasses" is expressed as either jedne okulary (one-plural glasses-plural) or jedna para okularów (one-singular pair-singular glasses-genitive plural). For larger quantities, "collective numeral" forms are available: troje drzwi (three doors), pięcioro skrzypiec (five violins). Compare them to the ordinary numeral forms found in Polish: trzy filmy/pięć filmów (three films/five films)[3]

Russian деньги (dengi money) originally had a singular, деньга (denga), which meant a copper coin worth half a kopeck.