Pocklington /ˈpɒklɪŋtən/ is a small market town and civil parish situated at the foot of the Yorkshire Wolds in the East Riding of Yorkshire, England. In 2011, its population was 8,337. It is located 13 miles (21 km) east of York[2] and 26 miles (42 km) north-west of Hull

The town's skyline is dominated by the 15th-century tower of All Saints' Church.

Pocklington lies at the centre of the ecclesiastical Parish of Pocklington, which also encompasses the small hamlet of Kilnwick Percy as well as a scattering of outlying farms and houses. 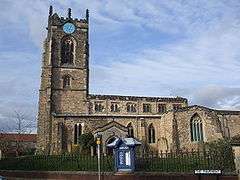 Pocklington gets its name via the Old English "Poclintun" from the Anglian settlement of Pocel's (or Pocela's) people and the Old English word "tun" meaning farm or settlement,[3] but though the town's name can only be traced back to around 650 AD, the inhabitation of Pocklington as a site is thought to extend back a further 1,000 years or more to the Bronze Age. Pocklington appears on the 14th century Gough Map, the oldest route map in Great Britain.[4]

In the Iron Age Pocklington was a major town of the Parisi tribe[5] and by the time of the Domesday Book in 1086 it was the second largest settlement in Yorkshire after York itself.[6]

The Town's coat of arms shield is based on that of the Dolman family, founders of Pocklington School. The arms were granted to the town council in 1980. The crown at the base of the shield is the emblem of the saints, along with the gold cross, symbolises the town's historic connection with Paulinus of York and the Archbishop of York.[8]

The town's motto is "Service with Freedom".[8]

Pocklington falls under the authority of East Riding of Yorkshire Council, a unitary authority. The town is part of the Pocklington Provincial Ward and returns three councillors to the council.

Since 2001, Pocklington has been part of the East Yorkshire Parliamentary Constituency. The seat is currently held by Greg Knight for the Conservative Party.[9]

Pocklington's Town Council consists of thirteen elected councillors and is responsible for the cemetery, allotments, the Croft play-park and the Arts Centre.[10]

The town council has a policy of naming all new streets using the surnames of the war dead who served at RAF Pocklington - this has given rise to the names Strother Close, Waite Close, Garrick Drive, Turnbull Close and Harper Close. There is some controversy surrounding the policy as local residents believe that the war heroes from Pocklington and nearby Barmby Moor should also be honoured in this way.[11]

In the last five years several action groups have been formed to address local issues:

Pocklington is twinned with: 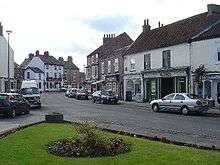 Pocklington is a spring line settlement, located at the base of the Yorkshire Wolds. Geologically speaking, the rocks underlying this area were lain down under tropical oceans, and, when the land rose, the chalk Wolds were formed from the skeletons and shells covering the sea floor. The landscape around Pocklington therefore varies from flat arable land primarily devoted to agriculture to the south and west, and grassy, chalk hills and dry valleys to the north and east. A lot of the more level farming country was, from the Middle Ages onwards, reclaimed from marshland.

Crops grown include traditional arable crops seen elsewhere in the country but also include rape seed, turf and sugar beet. The last was a familiar sight being hauled by tractor in large open-top trailers to York, where it was used by firms such as Nestle and, until its closure in 2007, British Sugar. Job cuts[14] have reduced the acreage of this crop, although feasibility studies have shown that sugar beet could be used commercially to produce cleaner car fuel.[15] Pocklington is bisected by the largely culverted Pocklington Beck,[16] a small brook that feeds into the Pocklington Canal. The beck and canal are usually good fishing grounds but a sewerage overflow in 2003 killed thousands of fish and severely damaged the ecosystem, from which it is now recovered.[17]

The East Riding of Yorkshire has a higher than average level of Christian belief and a much lower rate of observance for other faiths and those of no faith.[19] This can be attributed to the aforementioned lack of ethnic diversity in the area.

The high street contains a mix of public houses, shops, banks and restaurants.

A large number of Pocklington residents are commuters to nearby cities York, Hull and Leeds. Of those who work within the local area, of those not employed within the cluster of town centre services, a number work on the Pocklington Industrial Estate (light industrial) and Pocklington Business Park (commercial). Agriculture is still a large employer, both directly in the form of farming.

Day trippers also visit Millington Wood (a Site of Special Scientific Interest) and Pocklington Canal Head, with footpaths along the canal. The canal has been named one of the top ten places to see aquatic wildlife in Britain.[20] Nearby Allerthorpe Lakeland Park has parkland for walking, a lake with watersports facilities, a separate lake for fly fishing, and a BMX trail. There is also a large caravan park for visitors.

In a tribute to Munich's traditional Oktoberfest, Pocklington also hosts its own annual Pocktoberfest. Unlike the original on which it is based, Pocktoberfest is pared down to a single-issue event: beer. In the 2006 event, 19 casks (or about 452 litres) of ale were consumed.[22] Organiser of the 2012 Pocktoberfest, Clare Saunders, arranged for brewers from Germany. Italy, France, Belgium and the Netherlands to attend the festival, which is sponsored by C & N Wines and Swirlz Ice Cream Emporium.

Pocklington celebrates an annual Flying Man Festival [23] with a multitude of themed events from 12 to 14 May, in memory of the showman Thomas Pelling, the "Flying Man of Pocklington", who, with a pair of homemade wings, attempted a flight from the top of the local church, meeting his end when he collided with one of the church's buttresses.[24]

Kilnwick Percy Golf Club - more commonly known as The KP - lies just outside of Pocklington and offers luxury hotel rooms and lodges in addition to its championship golf course.[28]

In 2007, Michael Woods, a Pocklingtonian, made his debut for Chelsea.

Pocklington Town A.F.C. run four men’s Saturday football teams with the first team competing in the Humber Premier League. There is also an U19s team and girls' team. In the 2012-13 season the club's 1st team won the highest level trophy in the club's history by winning the Whitehead's Fish & Chips Humber League Cup at North Ferriby United's Rapid Solicitors Stadium. The club had floodlights installed during July 2008, allowing the club to make progress in the football league pyramid.

Pocklington Tennis Club, which has 6 astro-turf style courts and plays in both the York & District Tennis League[29] and the Driffield & District Lawn Tennis League, is located on West Green.[30]

Pocklington is a control point at the quadrennial London-Edinburgh-London long-distance bicycle event.[31]

Pocklington has a local weekly newspaper, the Pocklington Post and community radio station, West Wolds Radio.[32] A full-time community station, Vixen FM, based in nearby Market Weighton, broadcasts to the town. Also in the area is Beverley FM which serves Beverley and all of its surrounding areas, including Pocklington.

Although Pocklington is a relatively small town it has six schools/pre-schools:

Churches within Pocklington include:

There are no non-Christian houses of worship within Pocklington, but Kilnwick Hall, just outside Pocklington, is home to a large resident Madhyamaka Buddhist Meditation Retreat Centre. It runs regular Buddhist meditation classes.

Pocklington has its own Masonic Hall which is situated on the Mile. It is home to several lodges and orders including:

Pocklington lies on the A1079 road, the main arterial route between the cities of York and Hull.

Pocklington is served by a number of bus routes provided by East Yorkshire Motor Services. 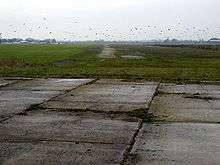 Pocklington Airfield has three concrete and tarmac runways of 1,600 yards (1,500 m), sufficient in length to take RAF bombers during the Second World War, but in September 1946 the airfield was closed. Although the site remains in use with gliders - and occasionally hot air balloonists - a lot of the concrete runway surface has gone, and the control tower is not in operation. It is therefore classified as "limited flying". The airfield is now wholly owned by the Wolds Gliding Club.

Pocklington was once part of the rail network, with a railway station dating back to 1847.[35] This was closed as a result of the Beeching Report in November 1965.[36] There is a small but vocal pressure group that is trying to get the railway station and line re-opened. The City of York Local Transport Plan for 2006 notes that: "work has recently been undertaken by East Riding of Yorkshire Council to examine the feasibility of reopening the former direct York – Pocklington - Beverley line that closed in 1965... given the unavailability of funding for such a scheme at present and the extensive time required for any reinstatement of a rail line, the scheme remains a longer-term aspiration."

The Minsters Rail Campaign is campaigning to re-open the railway line between Beverley and York (with stops at Stamford Bridge, Pocklington and Market Weighton). The re-opened railway would skirt the southern edge of the town as the former alignment has since been developed.[37] In 2006, the issue of re-opening the line has been raised in Parliament and, although still prohibitively expensive, was otherwise looked upon favourably.[35] However, in 2013, East Riding of Yorkshire Council decreed that the line was beyond funding capabilities at the present time.[38]

The old railway building, designed by George Townsend Andrews, was saved from demolition due to its interesting architecture. It now serves both as a bus shelter, and also a sports hall for nearby Pocklington School.[39]

The Pocklington Canal, previously in commercial use in the 19th century by barges, is now navigable as far as Melbourne Basin. Full restoration of the canal is one of the aims of the Pocklington Canal Amenity Society, which was formed in 1969.[40]