The Portland Tribune is a free newspaper published twice weekly, each Tuesday and Thursday, in Portland, Oregon, United States.

The Tribune is part of the Pamplin Media Group, which publishes a number of community newspapers in the Portland metropolitan area, and also owns and operates the talk radio station KPAM, and several other radio stations throughout the Pacific Northwest. The Tribune has twice been chosen as the nation's best non-daily paper. Launched in 2001, the paper was published twice-weekly until 2008, when it was reduced to weekly,[1] and returned to twice-weekly publication in 2014.[2]

Portland businessman Robert B. Pamplin, Jr. announced his intention to found the paper in the summer of 2000. The first issue of the twice-weekly (Tuesdays and Fridays) paper was published February 9, 2001,[3][4] joining The Oregonian, the city's only daily general interest newspaper, and the alternative weeklies Willamette Week and The Portland Mercury. At the time, it was a rare example of the expansion of print news, in a time when many cities were seeing newspapers merge or go out of business.[5] But its launch preceded a significant national downturn in advertising sales, which posed difficulties for a startup newspaper.[5] Eleven months after its launch, the Tribune cut back on home deliveries.[6] The newspaper was reportedly losing money faster than anticipated after its first year.[7] By late 2006, its newsroom staff had been reduced to 27.[1] 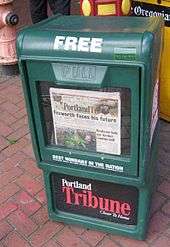 On May 5, 2008, the paper announced it would switch effective immediately to a once-a-week print format, with a Thursday print edition (in place of Tuesday and Fridays) accompanied by daily updates to its website.[8] In July 2009, "difficult economic conditions" led to the layoff of two reporters and the resignation of its managing editor, resulting in a newsroom staff of 14.[1]

In March 2014, the Portland Tribune resumed twice-weekly publication of its print edition, with reinstatement of a Tuesday edition, while continuing to publish a Thursday edition.[2]

The paper deals almost exclusively with issues local to Portland and the U.S. state of Oregon. The paper is known for its extensive coverage of local high school, college and professional sports teams, with concentration on the NBA, Pac-10, Big Sky Conference and West Coast Conference. A business section was added to the print edition in 2014, along with other coverage expansion, including health and fitness content and more regional coverage.[2]