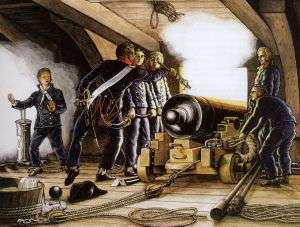 Powder monkey (left) on a Ship of the Line

A powder monkey on a Union vessel during the American Civil War, circa. 1864

A powder boy or powder monkey manned naval artillery guns as a member of a warship's crew, primarily during the Age of Sail. His chief role was to ferry gunpowder from the powder magazine in the ship's hold to the artillery pieces, either in bulk or as cartridges, to minimize the risk of fires and explosions.[1][2][3] The function was usually fulfilled by boy seamen 12 to 14 years of age. Powder monkeys were usually boys or young teens selected for the job for their speed and height — they were short and could move more easily in the limited space between decks and would also be hidden behind the ship's gunwale, keeping them from being shot by enemy ships' sharp shooters.[4] Some women and older men also worked as powder monkeys.[5]

The Royal Navy first began using the term "powder monkey" in the 17th century.[6] The term was later used, and continues to be used in some countries, to signify a skilled technician or engineer who engages in blasting work, such as in the mining or demolition industries. In such industries, a "powder monkey" is also sometimes referred to as a "blaster".[7]