This article is about fee-paying private schools for children between 8 and 13 years old, based on the British model. For North American schools which prepare older students for university entry, see University-preparatory school. 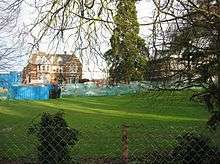 The Perse School, an English prep school in Cambridge

A preparatory school (or prep school) in the United Kingdom is a student selective, fee-paying independent primary school which caters primarily for children up to approximately 13. The term preparatory school is used as it prepares the children for the Common Entrance Examination to get them into a private independent secondary schools including the prestigious English public schools.[1] They are also now used by parents in the hopes of getting their child into a good state selective grammar school.[1]

Boys' prep schools are generally for 8- to 13-year-olds, who are prepared for the Common Entrance Examination, the key to entry into many secondary independent schools. Before the age of seven or eight, the term "pre-prep school" is used.[1] Girls' private schools in England tend to follow the age ranges of state schools more closely than those of boys. Girls' preparatory schools usually admit girls from the age of four or five, who will then continue to another independent school at 11, or at 13 if the school is co-educational (as most secondary schools now are). However, as more girls now go on to formerly single-sex boys' schools which have become co-educational, the separation is less clear.

There are 130,000 pupils in over 500 schools of all types and sizes. Prep schools may be for boys or girls only, or may be co-educational. They may be day schools, boarding schools, weekly boarding, flexi-boarding, or a combination. They fall into the following general categories:[2][3]

Originally developed in England and Wales in the early 19th century as boarding schools to prepare boys for leading public schools, such as Eton and Winchester, the numbers attending such schools increased due to large numbers of parents being overseas in the service of the British Empire. They are now found in all parts of the United Kingdom, and elsewhere.

There is a growing body of knowledge supporting the view that being sent away to boarding school at an early age can result in long-term psychological harm.[4][5][6][7] In 2008 it was announced that a committee of MPs was to investigate and look at the social and emotional impact of separating youngsters from their parents and the "possible dangers" of children being sent to boarding school at a young age.[8]