The education at vocational universities combines teaching of both practical skills and theoretical expertise. It can be contrasted with education in a usually broader scientific field, which may concentrate on theory and abstract conceptual knowledge. There is also the historical background that an educational institution was called a university in the Middle Ages only if a certain classical canon of subjects was taught (typically including philosophy, medicine and theology). In modern times, other subjects, namely natural and engineering sciences, became more important, but institutions of tertiary education focusing on these subjects and not offering the classical canon have until recently or are still denied the prestigious denomination "university" in all countries. They had to use other, more general terms (which in many languages are false friends of the English term "high school", sometimes with modifiers), including Fachhochschule in German, Haute Ecole in French (Belgium and Switzerland), Hogeschool in Dutch, Høyskole in Norwegian, Scuola universitaria professionale in Italian, etc.

The term vocational university is not used. In contrast to traditional German universities, a Fachhochschule (translated University of Applied Sciences) has a more practical profile. Universities of Applied Sciences grant Bachelor degrees and Master degrees. Some Universities of Applied Sciences run doctoral programs where the degree itself is awarded by a partner institution. Furthermore, Berufsakademie is a college type strongly inspired by the dual education system. A Berufsakademie is called a university of cooperative education in English and only grants bachelor's degrees. This type of institution was first created in the German state of Baden-Württemberg and now exists in Hamburg, Hesse, Lower Saxony, Saarland, Saxony, Schleswig-Holstein, and Thuringia, but not in the other German states. In 2009, Baden-Württemberg transformed its Berufsakademie into a new type of institution, which until now only exists in that state, a "Duale Hochschule". In English, this type of institution is also called university of cooperative education, but a Duale Hochschule also offers master's degrees.

In Greece, comparable institutions to the Vocational Universities (or perhaps better to the Universities of Applied Sciences) are the Technological Educational Institutes (TEIs). These constitute part and parcel of the (otherwise exclusively academic) Higher Education in Greece and offer in their own capacity [4 years] bachelor's, master's and doctorate degrees. In Greece, "Higher Education" entails also the distinction between "Higher" and "Highest", where both Universities and TEIs fall under the latter category/distinction, being able to issue titles up to Doctorate degrees. For more information and an official list of all the TEIs see here: Website.

On the other hand, the term College in Greece may refer, among others, to the institutions that are officially titled Centres of Post-lyceum(secondary) Education. These have a solely professional, i.e. non-academic, orientation according to existing Greek law, and are so far only private. However, they run in collaboration with foreign authorities, such as universities and accreditation organisations, that may recognise them academically. They may offer [professional] bachelor degrees of minimum three years, as well as master and doctorate degrees.

As of January 29, 2008, a Dutch hogeschool (hbo) may call itself a "University Of Applied Sciences" in English.[1]

Since 1 January 2014 there is no longer a distinction between the bachelor's and master's degrees awarded by the Dutch research universities (Dutch "universiteiten") and the Dutch Universities of Applied Sciences (Dutch "hogescholen"), therefore graduates from Universities of Applied Sciences in the Netherlands will obtain a Bachelor of Arts (BA), Master of Science (MSc) or an equivalent academic title corresponding to their specific field of study.[3][4]

Hogescholen in the Netherlands have been provided with the right to conduct research by the revised Higher Education and Research Act (WHOO)2010.[5] 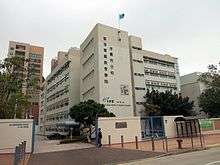 There are five public vocational universities in Malaysia:

In 2009, the first University of Vocational Technology was established under the purview of the Ministry of Vocational and Technical Training. There are also nine College of Technologys in Sri Lanka.[8]