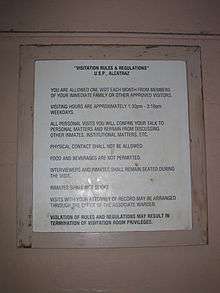 The rights of civilian and military prisoners are governed by both national and international law. International conventions include the International Covenant on Civil and Political Rights; the United Nations' Minimum Rules for the Treatment of Prisoners, the European Committee for the Prevention of Torture and Inhuman or Degrading Treatment or Punishment,[1] and the Convention on the Rights of Persons with Disabilities[2]

In the United States, the Prison Litigation Reform Act, or PLRA, is an anti-prisoner statute that became law in 1996. This act was introduced with the intent of limiting "frivolous lawsuits." However, it severely restricts the ability of prisoners to improve their own conditions through federal lawsuit, crippling internal efforts to obtain prison reform. Among its limiting provisions, the PLRA requires prisoners to exhaust all possibly executive means of reform before filing for litigation, restricts the normal procedure of having the losing defendant pay legal fees (thus making few lawyers willing to represent a prisoner), allows for the courts to dismiss cases as "frivolous" or "malicious" according to their own judgement, and forces prisoners to pay their court fees up front if they have three previous instances of a case having been dismissed as "frivolous."[3]