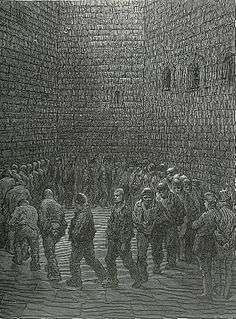 Gustave Doré's image of the exercise yard at Newgate Prison (1872)

A prisoner, also known as an inmate or detainee, is a person who is deprived of liberty against his or her will. This can be by confinement, captivity, or by forcible restraint. The term applies particularly to those on trial or serving a prison sentence in a prison.[1]

"Prisoner" is a legal term for a person who is imprisoned.[2]

In section 1 of the Prison Security Act 1992, the word "prisoner" means any person for the time being in a prison as a result of any requirement imposed by a court or otherwise that he be detained in legal custody.[3]

Glanville Williams described as "invidious" the practice of using the term "prisoner" in reference to a person who had not been convicted.[5]

The earliest evidence of the existence of the prisoner dates back to 8,000 BC from prehistoric graves in Lower Egypt. This evidence suggests that people from Libya enslaved a San-like tribe.[6][7]

Among the most extreme adverse effects suffered by prisoners, appear to be caused by solitary confinement for long durations. When held in "Special Housing Units" (SHU), prisoners are subject to sensory deprivation and lack of social contact that can have a severe negative impact on their mental health.

Long durations may lead to depression and changes to brain physiology. In the absence of a social context that is needed to validate perceptions of their environment, prisoners become highly malleable, abnormally sensitive, and exhibit increased vulnerability to the influence of those controlling their environment. Social connection and the support provided from social interaction are prerequisite to long-term social adjustment as a prisoner.

Prisoners exhibit the paradoxical effect of social withdrawal after long periods of solitary confinement. A shift takes place from a craving for greater social contact, to a fear of it. They may grow lethargic and apathetic, and no longer be able to control their own conduct when released from solitary confinement. They can come to depend upon the prison structure to control and limit their conduct.

Long-term stays in solitary confinement can cause prisoners to develop clinical depression, and long-term impulse control disorder. Those with pre-existing mental illnesses are at a higher risk for developing psychiatric symptoms. Some common behaviours are self-mutilation, suicidal tendencies, and psychosis.

A psychopathological condition identified as "SHU syndrome" has been observed among such prisoners. Symptoms are characterized as problems with concentration and memory, distortions of perception, and hallucinations. Most convicts suffering from SHU syndrome exhibit extreme generalized anxiety and panic disorder, with some suffering amnesia.[8]

The psychological syndrome known as Stockholm syndrome, describes a paradoxical phenomenon where, over time, hostages develop positive feelings towards their captors.

The founding of ethnographic prison sociology as a discipline, from which most of the meaningful knowledge of prison life and culture stems, is commonly credited to the publication of two key texts:[9] Donald Clemmer's The Prison Community,[10] which was first published in 1940 and republished in 1958; and Gresham Sykes classic study The Society of Captives,[11] which was also published in 1958. Clemmer's text, based on his study of 2,400 convicts over three years at the Menard Branch of the Illinois State Penitentiary where he worked as a clinical sociologist,[12] propagated the notion of the existence of a distinct inmate culture and society with values and norms antithetical to both the prison authority and the wider society. 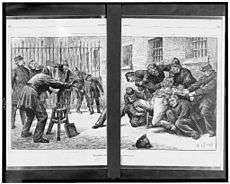 A scene in Newgate Prison, London

In this world, for Clemmer, these values, formalized as the "inmate code", provided behavioural precepts that unified prisoners and fostered antagonism to prison officers and the prison institution as a whole. The process whereby inmates acquired this set of values and behavioural guidelines as they adapted to prison life he termed "prisonization", which he defined as the "taking on, in greater or lesser degree, the folkways, mores, customs and general culture of the penitentiary'.[13] However, while Clemmer argued that all prisoners experienced some degree of prisonization this was not a uniform process and factors such as the extent to which a prisoner involved himself in primary group relations in the prison and the degree to which he identified with the external society all had a considerable impact.[14]

Prisonization as the inculcation of a convict culture was defined by identification with primary groups in prison, the use of prison slang and argot,[15] the adoption of specified rituals and a hostility to prison authority in contrast to inmate solidarity and was asserted by Clemmer to create individuals who were acculturated into a criminal and deviant way of life that stymied all attempts to reform their behaviour.[16]

Opposed to these theories, several European sociologists[17] have shown that inmates were often fragmented and the links they have with society are often stronger than those forged in prison, particularly through the action of work on time perception[18] 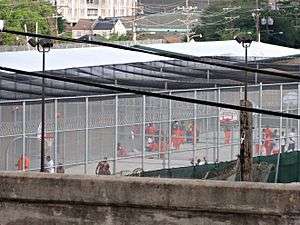 Inmates in a prison yard

The convict code was theorized as a set of tacit behavioural norms which exercised a pervasive impact on the conduct of prisoners. Competency in following the routines demanded by the code partly determined the inmate’s identity as a convict.[19] As a set of values and behavioural guidelines, the convict code referred to the behaviour of inmates in antagonising staff members and to the mutual solidarity between inmates as well as the tendency to the non-disclosure to prison authorities of prisoner activities and to resistance to rehabilitation programmes.[20] Thus, it was seen as providing an expression and form of communal resistance and allowed for the psychological survival of the individual under extremely repressive and regimented systems of carceral control.[21]

Sykes outlined some of the most salient points of this code as it applied in the post-war period in the United States: 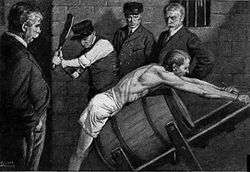 1912 illustration of an inmate being punished in an American prison

Both federal and state laws govern the rights of prisoners. Prisoners in the United States do not have full rights under the Constitution, however, they are protected by Amendment VIII which prohibits cruel and unusual punishment.[23]

Growing research associates education with a number of positive outcomes for prisoners, the institution, and society. Although at the time of the ban’s enactment there was limited knowledge about the relationship between education and recidivism, there is growing merit to idea that education in prison is a preventative to re-incarceration. Several studies help illustrate the point. For example, one study in 1997 that focused on 3,200 prisoners in Maryland, Minnesota, and Ohio, showed that simply attending school behind bars reduced the likelihood of re-incarceration by 29 percent. In 2000, the Texas Department of Education conducted a longitudinal study of 883 men and women who earned college degrees while incarcerated, finding recidivism rates between 27.2 percent (completion of an AA degree) and 7.8 percent (completion of a BA degree), compared to a system-wide recidivism rate between 40 and 43 percent.10 One report, sponsored by the Correctional Education Association, focused on recidivism in three states, concluding that education prevented crime. More recently, a 2013 Department of Justice funded study from the RAND Corporation found that incarcerated individuals who participated in correctional education were 43% less likely to return to prison within 3 years than prisoners who did not participate in such programs. The research implies that education has the potential to impact recidivism rates positively by lowering them.[24]

Other types of prisoners can include those under police arrest, house arrest, those in insane asylums, internment camps, and peoples restricted to a specific area such as Jews in the Warsaw ghetto.