In this Indian name, the name Sukumaran is a patronymic, not a family name, and the person should be referred to by the given name, Prithviraj.

Prithviraj Sukumaran (born 16 October 1982)[1] is an Indian film actor, producer, and playback singer best known for his work in Malayalam cinema.[2] He has also acted in Tamil, Telugu, and Hindi films.[3]

The son of actors Sukumaran and Mallika, Prithviraj was first spotted by director Fazil. Fazil's screen test of Prithviraj prompted director Ranjith to cast him in Nandanam, Prithviraj's first film, a 2002 romantic drama film.[4] In a career spanning over a decade, Prithviraj has starred in over 80 films.[5] Prithviraj produces films under his production company, August Cinema.[6] He has won two Kerala State Film Awards for Best Actor and a National Film Award (as producer).[7][8]

Prithviraj Sukumaran was born in Thiruvananthapuram to actors Sukumaran and Mallika Sukumaran. His initial schooling was at Shrine Vailankanni Senior Secondary School, T. Nagar, Chennai and St.Joseph's Boys' Hr.Sec.School, Coonoor, since the family was settled at Tamil Nadu that time.[9] Later when the family shifted to Kerala he had his education from The NSS Public School Perunthanni,[10] St.Mary's Residential Central School, Poojappura (which was near his home at Chengallur) where he acted in various plays and skits for the school's Annual Day Celebrations. He completed the rest of his school education at Sainik School Kazhakoottam and Bharathiya Vidya Bhavan, Thiruvananthapuram. Prithviraj, along with his brother Indrajith Sukumaran. He also participated in debates and elocution competitions while in school.[11] Prithviraj won the title of "Mr LA Fest" in the Annual Inter-School arts festival hosted by Loyola School, Thiruvananthapuram in successive years and is the only person to date to win that title twice.[12]

While pursuing his bachelor's degree in Information Technology at the University of Tasmania, Australia, he was called for a shot in the movies by film director Ranjith Balakrishnan to play the lead role in his film Nandanam.[11] It was Fazil, a well known Malayalam film director, who introduced him to Ranjith.[11] After his performance in Nandanam, he decided to take a break from studies to concentrate on his film career. Prithviraj's elder brother Indrajith Sukumaran and sister-in-law Poornima Indrajith are also film actors. 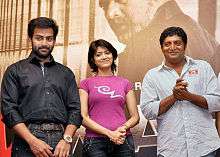 In 2001, 19-year-old Prithviraj underwent a screen-test by director Fazil for one of his projects at that time. Even though that project never materialised, Fazil recommended him to director Ranjith who was planning his second directorial venture, Nandanam. Ranjith instructed Prithviraj to grow a beard to look mature. Nandanam released in 2002. Though Nandanam is his debut film, it released after Nakshathrakkannulla Rajakumaran Avanundoru Rajakumari. After Nandanam, Prithviraj appeared in films directed by Lohithadas, Vinayan, Kamal and Bhadran. Shyamaprasad, who cast him in lead role in his film Akale, said that Prithviraj's advantages are his talent and intelligence irrespective of his box office successes.[13]

In 2006, he played the role of Sub Inspector Solomon Joseph in Vargam. After Vargam, Prithviraj acted in Vaasthavam with the same director, M. Padmakumar, for which he received the Kerala State Award for Best Actor of 2006,[14] and became the youngest actor to win the award.[15] The same year he starred in Lal Jose's Classmates. In 2007, he starred in Chocolate, directed by Shafi.[16] In 2008, he starred in Thalappavu (directed by Madhupal) and Thirakkatha (directed by Ranjith), in which he took up roles which serve as pivotal characters. One of the reviews of Thalappavu describes it as a film which is truly the coming-of-age film for Prithviraj the actor and that there is a spartan dignity that he brings into his commanding portrayal of Naxalite Joseph.[17] The Sify review of Thirakkatha describes it as a "genuine attempt that keeps the viewer engaged until the end".[18] Both Thalappavu and Thirakkatha shared the award for the best film in the Film Critics Award for 2008. He also made a special appearance in Anjali Menon's Manjadikuru.

In 2009, the success of Prithviraj's Puthiya Mukham (directed by Diphan) lead the print and visual media to call him "Young Superstar"[19][20] His other releases in 2009 were Robinhood (directed by Joshy) and the anthology film, Kerala Cafe. In 2010, Prithviraj's notable films were Pokkiri Raja and Anwar directed by Amal Neerad. In 2011, Prithviraj turned producer through the multilingual film Urumi. Other releases in Malayalam include City of God, Manikyakallu, Veettilekkulla Vazhi and Indian Rupee. Reviewers praised Prithviraj for his performance in Indian Rupee like the one at Nowrunning.com who described it as his career best performance.[21] In 2012, his major releases were Hero, Molly Aunty Rocks!, and Ayalum Njanum Thammil along with cameo roles in Aakashathinte Niram and Manjadikuru. In 2013, Prithviraj had three releases, Celluloid, Mumbai Police and Memories, all of which were critical and commercial successes. He portrayed J.C. Daniel in Celluloid for which he won his second Kerala State Film Award for Best Actor.[7]

In 2014, Prithviraj's first major release was London Bridge which became a disaster at boxoffice; followed by 7th Day which turned out to become a commercial success. He also did a cameo role in the Mammootty led Munnariyippu. His third release of the year,Sapthamashree Thaskaraha was praised by critics and audiences alike. His first release of 2015 was Picket 43. His second movie of 2015 was Shyamaprasad's Ivide. Even though the movie didn't match up to its expectations, Prithviraj was hugely praised for his outstanding acting in the movie. Varun Blake (Prithviraj's character in Ivide) is considered to be one of his best performances till date. He next appeared in Lijo Jose Pellissery's Double Barrel which was appreciated for its novelty. His most successful film of the year was Ennu Ninte Moideen which narrated the tragic love tale of Kanchanamala and Moideen that happened in the 1960s in Mukkam, a riverside village in Kerala. The film opened to critical acclaim, with several critics regarding it as one of the greatest romance films made in Malayalam.[22][23] His role as Moideen in the film is regarded as one of the best in his career.[24] His next releases Amar Akbar Anthony and Anarkali became back to back big hits. Thus, completing a hat-trick of hits ending the year.

In 2016, Prithviraj's first release was Pavada in January.After Pavada's success he worked in Darwindey parinamam,James and Alice, Oozham.Darwindey parinamam responded an average review and James and Alice was a disaster.But he got several comments and applause from the audience for his performance in James and Alice.Then his next release was Oozham on Sep 8 directed by Jeethu Joseph.The team memories again joined there hands and It was another commercial success.Upcoming release is Ezra in December.

In 2005, Prithviraj Sukumaran debuted in Tamil through Kana Kandaen In 2006, Prithviraj co-starred with actor Bhagyaraj's daughter Saranya Bhagyaraj in Parijatham. It has acclaimed as a hit and gave the actor a turning point in his Tamil film career. In 2007, Prithviraj co-starred Mozhi. He also starred in Satham Podathey and Kannamoochi Yenada in the same year. In 2008, Prithviraj starred in Vellithirai, the Tamil remake of Udayananu Tharam. Rediff described his performance: "Prithviraj makes the best of his assets – his nose, which glint in sad, harden with angry, or brim over with frustrated life".[25] The Tamil remake of Classmates, titled Ninaithale Inikkum, was released in 2009. He played a cop in Mani Ratnam's Raavanan in 2010 with Vikram playing the main protagonist and his performance was critically acclaimed.[26] Prithviraj played one of the main characters in director Vasanthabalan's big budget period film Kaaviya Thalaivan in which he co-stars with Siddharth.

Prithviraj debuted in Bollywood through Aiyyaa directed by Sachin Kundalkar. Aiyyaa which was jointly produced by Anurag Kashyap and Viacom 18[27] released on 12 October 2012. His second film Aurangzeb directed by Athul Sabharwal .[28] released on 17 May 2013.His performance was highly praised.He will be next seen in Naam Shabana in 2017

As actor and producer

Prithviraj debuted as a singer in Puthiya Mukham (2009) by singing the title song of the film, "Kaane Kaane".[32]