pronunciation , also known as Palghat, is a city and municipality in the state of Kerala in southern India, spread over an area of 26.60 km2 and is the administrative headquarters of the Palakkad District. In earlier times, Palakkad was known as Palakkattussery. Palakkad is the seventh most populous town in Kerala and lies near the Palghat Gap. Malayalam is the generally spoken language in Palakkad. The city is situated about 350 kilometres (217 mi) north of state capital Thiruvananthapuram and 54 kilometers south west of Coimbatore, and 66 km north east of Thrissur on the Salem-Kanyakumari National Highway NH 47.

The commonly held belief is that the name Palakkad is a fusion of two Malayalam words, Pala, which was the name given for barren land during the Sangam period, and Kadu, which means forest.[3] 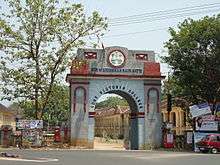 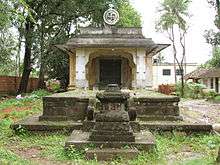 Palakkad is the gateway to Kerala due to the presence of the Palakkad Gap, in the Western Ghats. Malayalam is the generally spoken language in Palakkad as it is the official language. The town is blessed with many small and medium rivers, which are tributaries of the Bharathapuzha River. Of the number of dams in Palakkad district, the largest Malampuzha dam is 12 km from Palakkad town.[4]

Palakkad has a tropical wet and dry climate. Temperatures remain moderate throughout the year, with exception in March and April being the hottest months. A very high amount of precipitation is received in Palakkad, mainly due to the South-West monsoon. July is the wettest month, and the total annual rainfall is around 83 inches (211 cm).

The nearest international airport is Coimbatore International Airport, which is about 62 km from Palakkad.

There are two railway stations serving Palakkad - Palakkad Junction is a broad gauge railway junction (located at Olavakkode, which can be called a satellite town, about 4 km from the heart of the main town) and Palakkad Town railway station located in the heart of the Palakkad town. Close to Palakkad Junction is the office of Palakkad Railway Division. The cities of Coimbatore, Erode, Salem, Thiruvananthapuram, Kollam, Kozhikode and Ernakulam are connected by the broad gauge line. Train services to Pollachi, Dindigul and Madurai are through the broad gauge line through Palakkad Town station.[7]

Palakkad is well connected by roads. The National Highway 47 from Salem to Kanniyakumari via Coimbatore, Palakkad, Thrissur, Kochi, Alappuzha, Kollam and the Palakkad – Kozhikode National Highway 213 via Malappuram pass through the district.[8]

The metropolitan area of Palakkad includes Hemambikanagar, Marutharode, Palakkad municipality, Pirayiri, Pudussery Central, Pudussery West, and Puthuppariyaram.[11] Its urban / metropolitan population is 293,566 of which 143,650 are males and 149,916 are females. The literacy rate of Palakkad Metropolitan Area is 92.14%, much higher than the national average of 59.5%. Malayalam is the most spoken language.[10]

There are 972 schools in Palakkad district including 196 highschools.