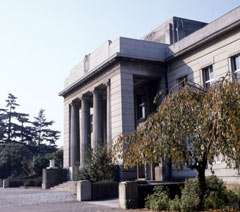 The Privy Council of Japan (枢密院, Sūmitsu-in) was an advisory council to the Emperor of Japan that operated from 1888 to 1947.

Modeled in part upon the Privy Council of the United Kingdom, this body advised the throne on matters of grave importance including: 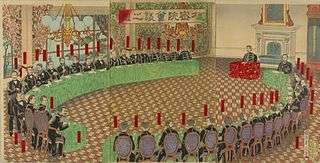 The Emperor meets with his Privy Councilors. Ukiyo-e woodblock prints by Yōshū Chikanobu, 1888

The Privy Council had both judicial functions and certain executive functions. However, the council had no power to initiate legislation.

The Privy Council of Japan was established by an imperial ordinance of Emperor Meiji dated 28 April 1888, under the presidency of Ito Hirobumi, to deliberate on the draft constitution.[1] The new constitution, which the emperor promulgated on 11 February 1889, briefly mentioned the Privy Council in Chapter 4, Article 56: "The Privy Councilors shall, in accordance with the provisions for the organization of the Privy Council, deliberate upon important matters of State when they have been consulted by the Emperor."

The Privy Council consisted of a chairman, a vice chairman (non-voting), twelve (later expanded to twenty-four) councilors, a chief secretary, and three additional secretaries. All privy councilors including the president and the vice president were appointed by the emperor for life, on the advice of the prime minister and the cabinet. In addition to the twenty-four voting privy counselors, the prime minister and the other ministers of state were ex officio members of the council. The princes of the imperial household (both the shinnōke and the ōke ) over the age of majority were permitted to attend meetings of the Privy Council and could participate in its proceedings. The president had extraordinary power, as it was he who called and controlled the meetings of the Council. The Council always met in secret at the Tokyo Imperial Palace, with the emperor in attendance on important occasions. The Council was empowered to deliberate on any matters upon which the emperor desired an opinion.

Assessments on the importance of the Privy Council vary from claims that it was the single most powerful agency in the Meiji government (probably true legally and theoretically), to allegations that it was completely insignificant in terms of national politics (probably also true in terms of actual practice). 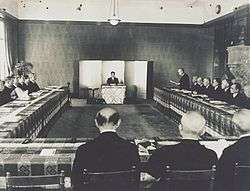 The Privy Council was abolished with the enforcement of the current postwar Constitution of Japan on 3 May 1947.

Presidents of the Privy Council