In this Japanese name, the family name is Hiranuma.

Hiranuma Kiichirō (平沼 騏一郎, 28 September 1867 – 22 August 1952) was a prominent pre–World War II right-wing Japanese politician and the 35th Prime Minister of Japan from 5 January 1939 to 30 August 1939. He was convicted of war crimes and sentenced to life imprisonment.

Hiranuma was born in what is now Tsuyama City, Okayama Prefecture, as the son of a low-ranking samurai from the Tsuyama Domain of Mimasaka Province. He graduated with a degree in English law from Tokyo Imperial University in 1888. After graduation, he obtained a posting in the Ministry of Justice.

At the Ministry of Justice

Hiranuma established a reputation during his time at the Ministry of Justice as a strong opponent of government corruption, successfully handling a number of high-profile cases. He served as the director of the Tokyo High Court, public prosecutor of the Supreme Court, and Director of the Civil and Criminal Affairs Bureau. In 1909, he secured the conviction of 25 former and serving members of the Diet of Japan for accepting bribes from the Japan Sugar Company. He rose to become Vice Minister of Justice in 1911, and Public Prosecutor-general in 1912.

In 1915, he forced Home Minister Ōura Kanetake in the cabinet of Prime Minister Ōkuma Shigenobu to resign due to suspected bribery.

Hiranuma was highly outspoken against the corruption and immorality in Japan's political parties, and this attitude soon expanded to include what he perceived to be threatening foreign influences, such as socialism and liberal democracy. With Sadao Araki, Hiranuma created the Kokuhonsha group, as well as participating in other nationalist groups.

In 1921, Hiranuma became chief of the Supreme Court of Japan.

Hiranuma became Minister of Justice under the second Yamamoto administration from September 1923 to January 1924. While Minister, he promoted the creation of the Tokkō to combat communism, socialism, and the spread of what he considered subversive ideologies. In 1924, he became chairman of the House of Peers and was also appointed to the Privy Council. In 1926, he was elevated to the title of danshaku (baron) under the kazoku peerage system.

Hiranuma served on the Privy Council for over 10 years, exerting considerable behind-the-scenes influence. He was strongly opposed to Prime Minister Wakatsuki Reijirō's efforts at economic reform. He was also strongly opposed to the ratification of the London Naval Treaty of 1930. In 1931, he rallied support within the government for the Imperial Japanese Army after the army seized control of Manchuria without prior authorization, and later helped in the creation of Manchukuo. He also pushed for Japan's withdrawal from the League of Nations. In 1934, he directed the prosecution during the Teijin Incident, bringing down the administration of Prime Minister Saitō Makoto. In 1936, Hiranuma was appointed President of the Privy Council. 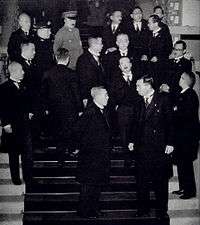 Hiranuma was appointed Prime Minister of Japan from 5 January 1939 to 30 August 1939. As Prime Minister, his administration was dominated by the debate on whether or not Japan should ally itself with Germany in order to neutralize the threat posed to Japan by the Soviet Union. Hiranuma wanted an anti-communist pact, but feared that a military alliance would commit Japan to war against the United States and Great Britain at a time when the bulk of its armed forces were committed to the Second Sino-Japanese War. With the signing of the German-Soviet Non-Aggression Pact in August 1939, Hiranuma's cabinet resigned over this foreign policy issue and over the massive defeat of the Japanese Army in Mongolia during the Nomonhan Incident against the Soviet Union.

Hiranuma returned to the government after his resignation as Prime Minister, accepting the post of Home Minister in the second Konoe Fumimaro administration from 21 December 1940 to 18 July 1941.

As Home Minister, he was a staunch defender of State Shintoism. Hiranuma declared: "We should research the ancient rites in detail and consider their application in administrative affairs in general and the common life of the nation".

However, Hiranuma was strongly opposed to the political and diplomatic actions of Foreign Minister Yōsuke Matsuoka, and the Tripartite Pact between Imperial Japan, Nazi Germany, and Fascist Italy in 1940.

He withdrew from the government on the resignation of Prime Minister Konoe in October 1941.

Hiranuma served as one of the jushin, or unofficial senior advisors, to Emperor Hirohito during World War II. Hiranuma saw the jushin as the core of a new group of genrō advisors, as the last surviving Meiji period genrō, Prince Saionji Kinmochi, died in November 1940. The new group included former Prime Ministers Mitsumasa Yonai, Nobuyuki Abe and Fumimaro Konoe, all of whom supported Japan's aggressive foreign policy and the right-socialist ideals of Kingoro Hashimoto on creation of a Military Shogunate that would manage the Imperial affairs directly. In April 1945, Hiranuma was again appointed President of the Privy Council.

After the war, he was arrested by the American Occupation Authorities and was convicted by the International Military Tribunal for the Far East as a Class A War Criminal, and given a life sentence. However, he was paroled in early 1952, and died shortly afterwards. His grave is at Tama Cemetery, outside of Tokyo.