The Pro Ecclesia et Pontifice (Latin: For Church and Pope) medal is an award of the Roman Catholic Church. It is also known as the "Cross of Honour".[1] The medal was established by Leo XIII on July 17, 1888, to commemorate his golden sacerdotal jubilee and was originally bestowed on those men and women who had aided and promoted the jubilee, and by other means assisted in making the jubilee and the Vatican Exposition successful.[2]

It is currently given for distinguished service to the church by lay people and clergy.[3] It is the highest medal that can be awarded to the laity by the Pope.[4]

The medal may be cast in gold, silver or bronze. On the medal is a cross made octangular by fleurs-de-lis fixed in the angles of the cross. The arms of the cross narrow towards the center, with slightly indented ends, approaching the form of the patonce cross. In the center of the cross is a small medal with the image of Leo XIII, the words "Leo XIII P. M. Anno X" (tenth year of his pontificate) circle the image. In the center of the reverse side are the papal emblems. The motto Pro Ecclesia et Pontifice is stamped in the circle surrounding the emblems.

On the obverse side of the medal, the branches of the cross are comets, which, with the fleurs-de-lis, form the coat of arms of the Pecci family. Stamped on the reverse side are the words "Pridie" (on the left branch), "Kal" (on the top branch), and "Januar" (on the right branch) and the year "1888" (at the foot of the cross). The medal's ribbon is red, with delicate lines of white and yellow on each border and is worn on the right side of breast.[5] 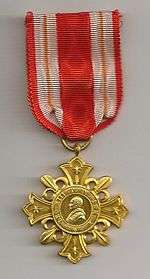 Obverse of the Holy Cross Pro Ecclesia et Pontifice of Pope Leo XIII
This article is issued from Wikipedia - version of the 11/13/2016. The text is available under the Creative Commons Attribution/Share Alike but additional terms may apply for the media files.