Dispute over the Order

Main article: History of the Order of Christ

The papacy insisted that the right of the Portuguese monarchs to award the honour had been granted by a pope in the Papal Bull Ad ea ex quibus issued in Avignon on 14/15 March 1319. While the Bull in itself does not explicitly grant to the Pope the right to issue the Order, successive popes since Pope John XXII have done so. For many years the Portuguese monarchy disputed the right of the papacy to award the Order, and in one famous case arrested someone for wearing the papal Order. The position of the Crown of Portugal was, that the only legitimate fons honorum was the Crown.[1] The position of the Catholic Church is that the pope is the head of every religious order and may appoint, at his discretion without the permission of its Superior General, any individual he deems worthy.[2]

Made senior papal Order in 1905 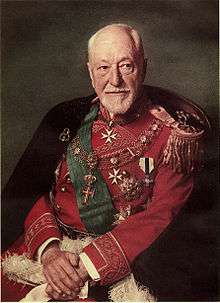 Fra' Ludovico, 76th Grand Master of the Sovereign Military Order of Malta, with the collar and star of the Supreme Order of Christ

As part of the general re-organisation of papal honours in 1905 by Pope Pius X, the papal Order of Christ was made the most senior papal honour. It was traditionally awarded to senior Catholic heads of state, notably Éamon de Valera as President of Ireland by Pope John XXIII. Controversially Popes Pius XII and John XXIII had refused to award the honour to his predecessor, Seán T. O'Kelly, to the fury of the Irish government. It was suggested to the Irish that usage of the Order was being phased out and that O'Kelly would be awarded a new level within the Pian Order of Pius IX, which from then on would be the Order given to heads of state. The Irish were however deeply unhappy at what they saw as a snub to their religious President O'Kelly. They suspected that the snub was revenge for his inadvertent causing of a diplomatic incident between Pope Pius XII and Joseph Stalin in 1950, when he revealed Pius's private belief that communism was likely to collapse and his views on Stalin, during a press conference after a papal audience. While a new level within the Pian Order was created and issued, the Order of Christ continued to be issued to other heads of state, including O'Kelly's own successor, de Valera.

Restricted by Pope Paul VI in 1966

Its usage was restricted by Pope Paul VI in his 15 April 1966 Papal Bull Equestres Ordinis, to Catholic heads of state to whom it might be given only to commemorate very special occasions at which the Pope himself was present. It has rarely been awarded since; the last award was made by Pope John Paul II in 1987 to Frà Angelo de Mojana, 77th Prince and Grand Master of the Sovereign Military Order of Malta. With the death of King Baudouin of the Belgians in 1993 there are no living members of the Order of Christ.

In ecclesiastical heraldry, individuals awarded this Order may depict a Collar completely encircling the shield on their coat of arms.[3]