For other uses, see Progressivism (disambiguation).

Progressivism is a philosophy based on the Idea of Progress, which asserts that advancement in science, technology, economic development, and social organization are vital to improve the human condition. Progressivism became highly significant during the Age of Enlightenment in Europe, out of the belief that Europe was demonstrating that societies could progress in civility from barbaric conditions to civilization through strengthening the basis of empirical knowledge as the foundation of society.[1] Figures of the Enlightenment believed that progress had universal application to all societies and that these ideas would spread across the world from Europe.[1] Sociologist Robert Nisbet defines five "crucial premises" of the Idea of Progress as being: value of the past; nobility of Western civilization; worth of economic/technological growth; scientific/scholarly knowledge obtained through reason over faith; the intrinsic importance and worth of life on Earth.[2] Beyond this, the meanings of progressivism have varied over time and from different perspectives.

The contemporary common political conception of progressivism in the culture of the Western world emerged from the vast social changes brought about by industrialization in the Western world in the late 19th century, particularly out of the view that progress was being stifled by vast economic inequality between the rich and the poor; minimally regulated laissez-faire capitalism with monopolistic corporations; and intense and often violent conflict between workers and capitalists, thus claiming that measures were needed to address these problems.[3]

The term is also now often used as shorthand for a more or less left-wing way of looking at the world.[4]

Progressivism in philosophy and politics

From the Enlightenment to the Industrial Revolution

Immanuel Kant identified progress as being a movement away from barbarism towards civilization. Eighteenth century philosopher and political scientist Marquis de Condorcet predicted that political progress would involve the disappearance of slavery, the rise of literacy, the lessening of inequalities between the sexes, reforms of harsh prisons and the decline of poverty.[5] "Modernity" or "modernization" was a key form of the idea of progress as promoted by classical liberals in the 19th and 20th centuries, who called for the rapid modernization of the economy and society to remove the traditional hindrances to free markets and free movements of people.[6] German philosopher Georg Wilhelm Friedrich Hegel was influential in promoting the Idea of Progress in European philosophy by emphasizing a linear-progressive conception of history and rejecting a cyclical conception of history. Karl Marx applied to his writings the Hegelian conception of linear-progressive history, the modernization of the economy through industrialization, and criticisms of the social class structure of industrial capitalist societies. As industrialization grew, concerns over its effects grew beyond Marxist and other radical critiques and became mainstream.

In the late 19th century, a political view rose in popularity in the Western world that progress was being stifled by vast economic inequality between the rich and the poor, minimally regulated laissez-faire capitalism with out-of-control monopolistic corporations, intense and often violent conflict between workers and capitalists, and a need for measures to address these problems.[7] Progressivism has influenced various political movements. Modern liberalism was influenced by liberal philosopher John Stuart Mill's conception of people being "progressive beings".[8] British Prime Minister Benjamin Disraeli developed progressive conservatism under "One Nation" Toryism.[9][10] Similarly in Germany, Chancellor Otto von Bismarck enacted various progressive social welfare measures out of conservative motivations to distance workers from the socialist movement and as humane ways to assist in maintaining the Industrial Revolution.[11] Proponents of social democracy have identified themselves as promoting the progressive cause.[12] The Catholic Church encyclical Rerum novarum issued by Pope Leo XIII in 1891, condemned the exploitation of labour and urged support for labour unions, government regulation of businesses in the interests of social justice, while upholding the rights of private property and criticizing socialism.[13] A Protestant progressive outlook called the Social Gospel emerged in North America that focused on challenging economic exploitation and poverty, and by the mid-1890s the Social Gospel was common in many Protestant theological seminaries in the United States.[14] In 1892, during a major political contest between landlords and tenants, the landlord advocates were known as the "moderates" and the land value tax reformers were known as the "progressives".[15]

In America, progressivism began as a social movement in the late 19th and early 20th centuries and grew into a political movement, in what was known as the Progressive Era. While the term "American progressives" represent a range of diverse political pressure groups (not always united), some American progressives rejected Social Darwinism, believing that the problems society faced (poverty, violence, greed, racism, class warfare) could best be addressed by providing good education, a safe environment, and an efficient workplace. Progressives lived mainly in the cities, were college educated, and believed that government could be a tool for change.[16] American President Theodore Roosevelt of the US Republican Party and later the US Progressive Party declared that he "always believed that wise progressivism and wise conservatism go hand in hand".[17] American President Woodrow Wilson was also a member of the American progressive movement within the Democratic Party. 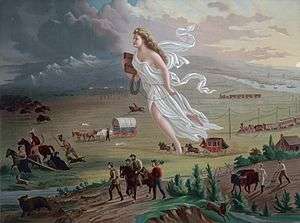 John Gast, American Progress, circa 1872. The right side of the painting shows white settlers and modern technology arriving and the area is depicted in brightness. The left side of the painting shows indigenous people and wildlife leaving and the area is depicted in darkness. In the middle is an angelic female representation of "Manifest Destiny" - the concept and agenda that promoted westward territorial expansion of the United States as a necessity.

Progressive stances have evolved over time. In the late 19th century, for example, certain progressives argued for scientific racism on the grounds that it had a scientific basis.[18] Other progressives holding both Christian and racist beliefs justified racism on biblical text.[19][20] Modern progressives now tend to describe race as merely a social construct[21] noting that genetic markers are not exclusive to any race of people, and that human races do not even exist biologically. There is controversy about this issue, with some geneticists reporting that there is research that supports a biological, genetic basis for our usual understanding of human races.<Genome Biology<Genome Biology 202. 3(7)><New Eng j Med 2006 354 (4)408>[22][23][24] Imperialism was a controversial issue within progressivism in the late 19th and early 20th centuries, particularly in the United States where some progressives supported American imperialism, while others opposed it.[25] In response to World War I, progressive American President Woodrow Wilson's Fourteen Points established the concept of national self-determination and criticized imperialist competition and colonial injustices; these views were supported by anti-imperialists in areas of the world that were resisting imperial rule.[26] During the period of acceptance of economic Keynesianism, circa 1920s to 1970s, there was widespread acceptance in many nations of a large role for state intervention in the economy. However, with the rise of neoliberalism and challenges to state interventionist policies in the 1970s and 1980s, centre-left progressive movements responded by creating the Third Way that emphasized a major role for the market economy.[27] In the aftermath of the arising of the Great Recession, economic policies established or influenced by neoliberalism have faced scrutiny and criticism in mainstream politics. There have been social democrats who have called for the social democratic movement to move past Third Way.[28] Prominent progressive conservative elements in the British Conservative Party have criticized neoliberalism.[29]