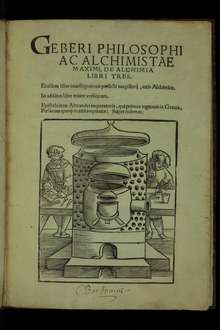 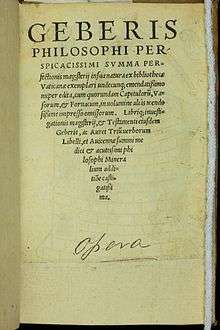 Pseudo-Geber ("false Geber") is the name assigned by modern scholars to an anonymous European alchemist born in the 13th century (sometimes identified with Paul of Taranto[1]) who wrote books on alchemy and metallurgy in Latin under the pen name of "Geber".

"Geber" is the shortened and Latinised form of the name Jābir ibn Hayyān, a 9th-century Islamic alchemist. In Europe for many centuries from the 14th century onward it was assumed that "Geber" was identical with Jabir ibn Hayyan and that the books of "Geber" had been translated from Arabic. Arabic alchemy was held in high esteem by 13th century European alchemists. Pseudo-Geber adopted the name of his illustrious Arabic predecessor to attach more stature to his own work. The practice of adopting the name of an illustrious predecessor is called pseudepigraphy, and it was not uncommon in the medieval era. Similarly, a wide variety of medieval writings were distributed with the illustrious Aristotle as the stated author that were not written by the original authentic Aristotle.

In the domain of alchemy and metallurgy in late medieval Europe, Pseudo-Geber's output was highly influential, arguably more influential than any other author.

The Pseudo-Geber Corpus and the Geber Problem

The following set of books is called the "Pseudo-Geber Corpus" (or the "Latin Geber Corpus"). The books were published by printing press several times in the first half of the 16th century.[2] They were in circulation in manuscript for roughly 200 years beforehand. The stated author is "Geber" or "Geber Arabis" (Latin for "Geber the Arab"), and it is stated in some copies that the translator is "Rodogerus Hispalensis" (Latin for "Rodger of Seville").

Being the clearest expression of alchemical theory and laboratory directions available until then—in a field where mysticism, secrecy, and obscurity were the usual rule—Pseudo-Geber's books were widely read and influential among European alchemists.[3] The Summa Perfectionis in particular was one of the most widely read alchemy books in western Europe in the late medieval period.[4] The next three books on the list above are shorter and are, to a substantial degree, condensations of the material in the Summa Perfectionis. The last two books listed, Testamentum Geberi and Alchemia Geberi, are "absolutely spurious, being of a later date [than the other four]", as Marcellin Berthelot put it,[5] and they are usually not included as part of the Pseudo-Geber corpus. Their author is not the same as the others, but it is not certain that the first four have the same author either.[6]

As mentioned, the Pseudo-Geber corpus was assumed to be translated from Arabic throughout the medieval and renaissance periods. This assumption was reversed in the late 19th century by the studies of Kopp, Hoefer, Berthelot, and Lippmann. The corpus is clearly influenced by medieval Arabic writers (especially by Al-Razi, and not particularly by the eponymous Jabir). The estimated date for the first four books is 1310, and they could not date from much before that because no reference to the Summa Perfectionis is found anywhere in the world before or during the 13th century. For example, there is no mention in the 13th century writings of Albertus Magnus and Roger Bacon.[7] No Arabic copies exist.[8] Their contents reflect the state of knowledge in Europe at about 1300. As one chemistry historian writes: "An important point of evidence is the absence in the Arabic texts of the new and original facts recorded in the Latin particularly... nitric acid, aqua regia, oil of vitriol, silver nitrate...."[5] Aqua regia is a mixture of nitric acid and hydrochloric acid. Its first documented occurrence in world history is in Pseudo-Geber.[9] Knowledge of nitric acid itself does not appear in any writings before the 13th century, and arguably appears first in Pseudo-Geber. Silver nitrate probably appears in Albertus Magnus in the 13th century, and is not found earlier.

The question at once arises whether the Latin works are genuine translations from the Arabic, or written by a Latin author and, according to common practice, ascribed to Jabir in order to heighten their authority. That they are based on Muslim alchemical theory and practice is not questioned, but the same may be said of most Latin treatises on alchemy of that period; and from various turns of phrase it seems likely that their author could read Arabic. But the general style of the works is too clear and systematic to find a close parallel in any of the known writings of the Jabirian corpus, and we look in vain in them for any references to the characteristically Jabirian ideas of "balance" and the alphabetic numerology. Indeed for their age they have a remarkably matter of fact air about them, theory being stated with a minimum of prolixity and much precise practical detail being given. The general impression they convey is that they are the product of an occidental rather than an oriental mind, and a likely guess would be that they were written by a European scholar, possibly in Moorish Spain. Whatever their origin, they became the principal authorities in early Western alchemy and held that position for two or three centuries.

Another chemistry historian writes that the question of Geber's identity, whether he is the original Jābir or a "pseudo-Geber" adopting his name, is "still in dispute", but then proceeds himself to call Geber "a Latin author".[11] The chemistry historians who think the question is still in dispute are few and far between.[12] However, the identity of this Latin author remains a mystery. He may have lived in Italy or Spain, or both. Some books in the Geber corpus may have been written by authors that post-date the author of the Summa Perfectionis. As mentioned already, the contents of most of the other books in the corpus are mostly recapitulations of the Summa Perfectionis.[5] The one entitled De Inventione Veritatis, though mostly a recapitulation of Summa Perfectionis, has the earliest known recipe for the preparation of nitric acid."[9]

Its author assumed that all metals are composed of unified sulfur and mercury corpuscles[13] and gave detailed descriptions of metallic properties in those terms. He explained the use of an elixir in transmuting base metals into gold (see philosopher's stone) and defended alchemy at length against the charge that transmutation of metals was impossible. His practical directions for laboratory procedures were so clear that it is obvious he was familiar with many chemical operations. His works contain the first recipes for producing mineral acids.[9] His works on chemistry were not equaled until the 16th century writings of chemist Vannoccio Biringuccio, mineralogist Georgius Agricola, and the alchemist Lazarus Ercker[14]