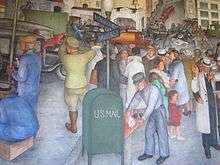 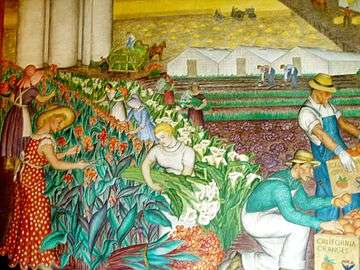 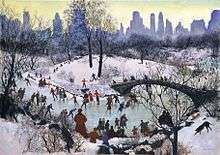 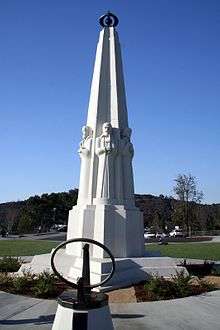 The Public Works of Art Project (PWAP) was a program to employ artists, as part of the New Deal, during the Great Depression. It was the first such program, running from December 1933 to June 1934. It was headed by Edward Bruce, under the United States Treasury Department and paid for by the Civil Works Administration.[1]

The purpose of the PWAP was "to give work to artists by arranging to have competent representatives of the profession embellish public buildings."[2] Artists were told that the subject matter had to be related to the "American scene". Artworks from the project were shown or incorporated into a variety of locations, including the White House and House of Representatives.[2][3]

The project was succeeded by the Federal Art Project of the Works Progress Administration.[3]

After a majority of the murals were completed, the Big Strike of 1934 shut down the Pacific Coast. Though it has been claimed that allusions to the event were subversively included in the murals by some of the artists, in fact the murals were largely completed before the strike began and none of those that were not completed by that time show any reference to the strike.[5]

Another significant project funded by PWAP is the Astronomers Monument at Griffith Observatory in Los Angeles. The monument is a large outdoor concrete sculpture on the front lawn that pays homage to six of the greatest astronomers of all time: Hipparchus (about 150 BC); Nicholas Copernicus (1473–1543); Galileo Galilei (1564–1642); Johannes Kepler (1571–1630); Isaac Newton (1642–1727); and William Herschel (1738–1822). Soon after the PWAP began in December 1933, in cooperation with the Los Angeles Park Commission, PWAP commissioned a sculpture project on the grounds of the new Observatory (which was under construction). Using a design by local artist Archibald Garner and materials donated by the Women's' Auxiliary of the Los Angeles Chamber of Commerce, Garner and five other artists sculpted and cast the concrete monument and figures. Each artist was responsible for sculpting one astronomer; one of the artists, George Stanley, was also the creator of the famous "Oscar" statuette presented at the Academy Awards. On November 25, 1934 (about six months prior to the opening of the Observatory), a celebration took place to mark completion of the Astronomers Monument. The only "signature" on the Astronomers Monument is "PWAP 1934" referring to the program which funded the project and the year it was completed.