The National Labor Relations Act of 1935 (49 Stat. 449) 29 U.S.C. § 151–169 (also known as the Wagner Act after New York Senator Robert F. Wagner[1]) is a foundational statute of United States labor law which guarantees into trade unions, engage in collective bargaining for better terms and conditions at work, and take collective action including strike if necessary. The act also created the National Labor Relations Board, which conducts elections that can require employers to engage in collective bargaining with labor unions (also known as trade unions). The Act does not apply to workers who are covered by the Railway Labor Act, agricultural employees, domestic employees, supervisors, federal, state or local government workers, independent contractors and some close relatives of individual employers.[2] 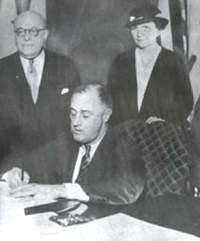 President Franklin Roosevelt signed the legislation into law on July 5, 1935.[3]

It also has its roots in a variety of different labor acts previously enacted:

Under section 1 (29 U.S.C. § 151) of the Act, the key principles and policy findings on which the Act was based are explained. The Act aims to correct the "inequality of bargaining power between employees who do not possess full freedom of association or actual liberty of contract and employers who are organized in the corporate or other forms of ownership association". To achieve this, the central idea is the promotion of collective bargaining between independent trade unions, on behalf of the workforce, and the employer.[4]

Various definitions are explained in section 2, (29 U.S.C. § 152) including 2(5) defining "labor organization" and 2(9) defining "labor dispute". The Act aims to protect employees as a group, and so is not based on a formal or legal relationship between an employer and employee.[5]

Section 7 (29 U.S.C. § 157) sets out the general principle that employees have the right to join a trade union and engage in collective bargaining.[7]

Specific rules in support of collective bargaining are as follows.

"Employees shall have the right to self-organization, to form, join, or assist labor organizations, to bargain collectively through representatives of their own choosing, and to engage in other concerted activities for the purpose of collective bargaining or other mutual aid or protection, and shall also have the right to refrain from any or all of such activities except to the extent that such right may be affected by an agreement requiring membership in a labor organization as a condition of employment as authorized in section 158 (a)(3) of this title."

In addition, added by the Taft–Hartley Act, there are seven unfair labor practices aimed at unions and employees.

Under section 9 (29 U.S.C. § 159) the people elected by a majority of the workforce have the right to become the exclusive representatives of workers in collective bargaining with the employer.

The NLRA 1935 does not cover two main groups of employees: those working for the government, and in the railway or airline industries. Section 2(2) (29 USC §152(2)) states that the Act does not apply to employees of the "United States or any wholly owned Government corporation, or any Federal Reserve Bank, or any State or political subdivision thereof, or any person subject to the Railway Labor Act". Under section 19 (29 U.S.C. § 169), people who have religious convictions against joining a trade union are entitled to not associate or financially support it.

"The Social Security Act of 1935 excluded from coverage about half the workers in the American economy. Among the excluded groups were agricultural and domestic workers—a large percentage of whom were African Americans."[12]

"Nothing in this subchapter, except as specifically provided for herein, shall be construed so as either to interfere with or impede or diminish in any way the right to strike, or to affect the limitations or qualifications on that right."

The act was bitterly opposed by the Republican Party and business groups. The American Liberty League viewed the act as a threat to freedom and engaged in a campaign of opposition in order to repeal these "socialist" efforts. This included encouraging employers to refuse to comply with the NLRB and supporting the nationwide filing of injunctions to keep the NLRB from functioning. This campaign continued until the NLRA was found constitutional by the Supreme Court in National Labor Relations Board v. Jones & Laughlin Steel Corporation (1937).

Labor groups, while overwhelmingly supportive, expressed a set of reservations. The American Federation of Labor and some employers accused the NLRB of favoring the Congress of Industrial Organizations, particularly when determining whether to hold union elections in plant-wide, or wall-to-wall, units, which the CIO usually sought, or to hold separate elections in separate craft units, which the craft unions in the AFL favored. While the NLRB initially favored plant-wide units, which tacitly favored the CIO's industrial unionism, it retreated to a compromise position several years later under pressure from Congress that allowed craft unions to seek separate representation of smaller groups of workers at the same time that another union was seeking a wall-to-wall unit.

Employers and their allies in Congress also criticized the NLRA for its expansive definition of "employee" and for allowing supervisors and plant guards to form unions, sometimes affiliated with the unions that represented the employees whom they were supposed to supervise or police. Many accused the NLRB of a general pro-union and anti-employer bias, pointing to the Board's controversial decisions in such areas as employer free speech and "mixed motive" cases, in which the NLRB held that an employer violated the Act by using misconduct that ordinarily would not result in termination to fire an employee who was engaged in pro-union activity. In addition, employers campaigned over the years to outlaw a number of union practices such as closed shops, secondary boycotts, jurisdictional strikes, mass picketing, strikes in violation of contractual no-strike clauses, pension and health and welfare plans sponsored by unions and multi-employer bargaining.

Many of these criticisms included provisions that employers and their allies were unable to have included in the NLRA. Others developed in reaction to NLRB decisions. Over all, they wanted the NLRB to be neutral as to bargaining power, but the NLRA's policy section takes a decidedly pro-employee position:

It is declared to be the policy of the United States to eliminate the causes of certain substantial obstructions to the free flow of commerce and to mitigate and eliminate these obstructions when they have occurred by encouraging the practice and procedure of collective bargaining and by protecting the exercise by workers of full freedom of association, self-organization, and designation of representatives of their own choosing, for the purpose of negotiating the terms and conditions of their employment or other mutual aid or protection.

Some of these changes were later achieved in the 1947 amendments.

Opponents of the Wagner Act introduced several hundred bills to amend or repeal the law in the decade after its passage. All of them failed or were vetoed until the passage of the Taft–Hartley amendments in 1947.

More recent failed amendments included attempts in 1978 to permit triple backpay awards and union collective bargaining certification based on signed union authorization cards, a provision that is similar to one of the proposed amendments in the Employee Free Choice Act. Under the NLRA, unions can become the representative based on signed union authorization cards only if the employer voluntarily recognizes the union. If the employer refuses to recognize the union, the union can be certified through a secret-ballot election conducted by the NLRB.

The Little Wagner Act, written by Ida Klaus, is the New York City version of the Wagner Act.[13][14]