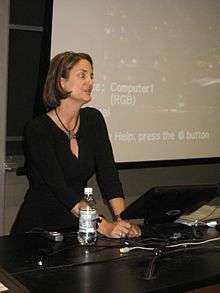 Photojournalist Carolyn Cole, who won the award in 2004

The Pulitzer Prize for Feature Photography is one of the American Pulitzer Prizes annually awarded for journalism. It recognizes a distinguished example of feature photography in black and white or color, which may consist of a photograph or photographs, a sequence or an album.

One Feature Photography Pulitzer has been awarded annually from 1968 without exception.[1]