Founded in 1944,[2][3] AFP is the third largest news agency in the world, after the Associated Press (AP) and Reuters. Journalists of the French Resistance established the AFP in the headquarters of the former "Office Français d'Information", a Vichy news agency, following the liberation of Paris.

Currently, the CEO is Emmanuel Hoog and the News Director is Michèle Léridon.[4] AFP has regional offices in Nicosia, Montevideo, Hong Kong, and Washington, D.C., and bureaux in 150 countries. AFP transmits news in French, English, Arabic, Portuguese, Spanish, and German.

The Agence Havas was founded in 1835 by a Parisian translator and advertising agent, Charles-Louis Havas[5] as Agence Havas. Two of his employees, Paul Reuter and Bernhard Wolff, later set up rival news agencies in London and Berlin respectively, starting 1848. In order to reduce overhead and develop the lucrative advertising side of the business, Havas's sons, who had succeeded him in 1852, signed agreements with Reuter and Wolff, giving each news agency an exclusive reporting zone in different parts of Europe. This arrangement lasted until the 1930s, when the invention of short-wave wireless improved and cut communications costs. To help Havas extend the scope of its reporting at a time of great international tension, the French government financed up to 47% of its investments.

In 1940, when German forces occupied France during the World War II, the news agency was taken over by the authorities and renamed "Office Français d'Information" (French Information Office); only the private advertising company retained the name Havas.[6] On August 20, 1944, as Allied forces moved on Paris, a group of journalists in the French Resistance seized the offices of the FIO and issued the first news dispatch from the liberated city under the name of Agence France-Presse.

Established as a state enterprise, AFP devoted the post-war years to developing its network of international correspondents. One of them was the first Western journalist to report the death of the Soviet dictator Joseph Stalin on March 6, 1953. AFP was keen to shake off its semi-official status, and on January 10, 1957 the French Parliament passed a law establishing its independence. Since that date, the proportion of the agency's revenues generated by subscriptions from government departments has steadily declined. Such subscriptions represented 115 million Euros in 2011.[7]

In 1982, the agency began to decentralize its editorial decision-making by setting up the first of its five autonomous regional centres, in Hong Kong, then a British Crown colony. Each region has its own budget, administrative director and chief editor. In September 2007, the AFP Foundation was launched to promote higher standards of journalism worldwide. The mission of the AFP "... is' 'defined by its statutes: to report events, free of « all influences or considerations likely to impair the exactitude » of its news and « under no circumstances to pass under the legal or actual control of an ideological, political or economic group."[8]

The Mitrokhin archive identified six agents and two confidential KGB contacts inside Agence France-Presse who were used in Soviet operations in France.[9]

In October 2008, the Government of France announced moves to change AFP's status, including the involvement of outside investors. On November 27 of that year, the main trade unions represented in the company's home base of France – the CGT, Force Ouvrière, Syndicat national des journalistes,[12] Union syndicale des journalistes CFDT[13] and SUD, launched an online petition to oppose what they saw as an attempt to privatise the agency.

On December 10, 2009, the French Culture Minister Frédéric Mitterrand announced that he was setting up a Committee of Experts under former AFP CEO Henri Pigeat to study plans for the agency's future status.[14] On February 24, 2010, Pierre Louette unexpectedly announced his intention to resign as CEO by the end of March, and move to a job with France Télécom. 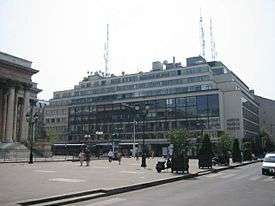 AFP is a government-chartered public corporation operating under a 1957 law,[15] but is officially a commercial business independent of the French government. AFP is administered by a CEO and a board comprising 15 members:

The board elects the CEO for a renewable term of three years. The AFP also has a council charged with ensuring that the agency operates according to its statutes, which mandate absolute independence and neutrality. Editorially, AFP is governed by a network of senior journalists.

The primary client of AFP is the French government, which purchases subscriptions for its various services. In practice, those subscriptions are an indirect subsidy to AFP. The statutes of the agency prohibit direct government subsidies.

In November 2013, AFP and Getty Images were ordered to pay $1.2 million compensation to freelance photojournalist Daniel Morel for using his images posted on Twitter related to the 2010 Haiti earthquake without his permission, in violation of copyright and Twitter's terms of service.[16][17]

AFP GmbH is the subsidiary of AFP in Germany, producing German-language services for local press, internet and corporate clients.

In November 2007, AFP announced its investment in Scooplive, a news photo and video agency online, created in France in 2006. Scooplive became Citizenside after this investment. Citizenside is now named Newzulu.