The identity is given by the formula:

If the length of the hypotenuse of a right triangle is 1, then the length of either of the legs is the sine of the opposite angle and is also the cosine of the adjacent acute angle. Therefore, this trigonometric identity follows from the Pythagorean theorem.

Proofs and their relationships to the Pythagorean theorem 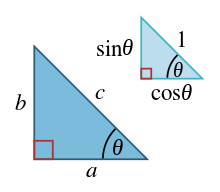 Proof based on right-angle triangles

Any similar triangles have the property that if we select the same angle in all of them, the ratio of the two sides defining the angle is the same regardless of which similar triangle is selected, regardless of its actual size: the ratios depend upon the three angles, not the lengths of the sides. Thus for either of the similar right triangles in the figure, the ratio of its horizontal side to its hypotenuse is the same, namely cos θ.

The elementary definitions of the sine and cosine functions in terms of the sides of a right triangle are:

The Pythagorean identity follows by squaring both definitions above, and adding; the left-hand side of the identity then becomes

which by the Pythagorean theorem is equal to 1. This definition is valid for all angles, due to the definition of defining

for the unit circle and thus

Alternatively, the identities found at Trigonometric symmetry, shifts, and periodicity may be employed. By the periodicity identities we can say if the formula is true for −π < θ ≤ π then it is true for all real θ. Next we prove the range π/2 < θ ≤ π, to do this we let t = θ − π/2, t will now be in the range 0 < t ≤ π/2. We can then make use of squared versions of some basic shift identities (squaring conveniently removes the minus signs):

All that remains is to prove it for −π < θ < 0; this can be done by squaring the symmetry identities to get 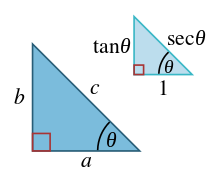 The following table gives the identities with the factor or divisor that relates them to the main identity.. 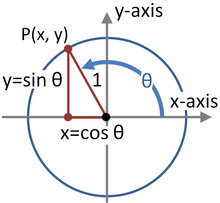 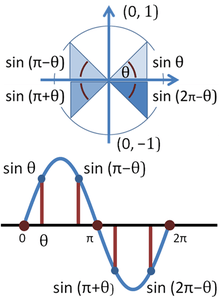 Sine function on unit circle (top) and its graph (bottom)

The unit circle centered at the origin in the Euclidean plane is defined by the equation:[2]

Given an angle θ, there is a unique point P on the unit circle at an angle θ from the x-axis, and the x- and y-coordinates of P are:[3]

Consequently, from the equation for the unit circle:

In the figure, the point P has a negative x-coordinate, and is appropriately given by x = cosθ, which is a negative number: cosθ = −cos(π−θ ). Point P has a positive y-coordinate, and sinθ = sin(π−θ ) > 0. As θ increases from zero to the full circle θ = 2π, the sine and cosine change signs in the various quadrants to keep x and y with the correct signs. The figure shows how the sign of the sine function varies as the angle changes quadrant.

The trigonometric functions may also be defined using power series, namely (for x an angle measured in radians):[4][5]

by the binomial theorem. Consequently,

which is the Pythagorean trigonometric identity.

The Pythagorean theorem is not closely related to the Pythagorean identity when the trigonometric functions are defined in this way; instead, in combination with the theorem, the identity now shows that these power series parameterize the unit circle, which we used in the previous section. Note that this definition actually constructs the sin and cos functions in a rigorous fashion and proves that they are differentiable, so that in fact it subsumes the previous two.

Sine and Cosine can be defined as the two solutions to the differential equation:[6]

satisfying respectively y(0) = 0, y′(0) = 1 and y(0) = 1, y′(0) = 0. It follows from the theory of ordinary differential equations that the first solution, sine, has the second, cosine, as its derivative, and it follows from this that the derivative of cosine is the negative of the sine. The identity is equivalent to the assertion that the function

is constant and equal to 1. Differentiating using the chain rule gives:

so z is constant by the mean value theorem. A calculation confirms that z(0) = 1, and z is a constant so z = 1 for all x, so the Pythagorean identity is established.

This proof of the identity has no direct connection with Euclid's demonstration of the Pythagorean theorem.