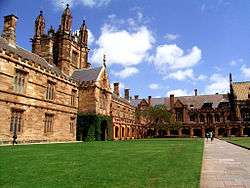 Quadrangle of University of Sydney 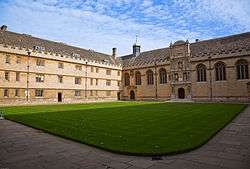 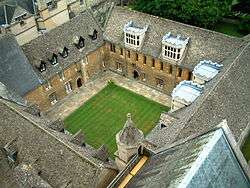 In architecture, a quadrangle (or colloquially, a quad) is a space or courtyard, usually rectangular (square or oblong) in plan, the sides of which are entirely or mainly occupied by parts of a large building (or several smaller buildings). The word is probably most closely associated with college or university campus architecture, but quadrangles may be found in other buildings such as palaces. Most quadrangles are open-air, while a few have been roofed over (often with glass), to provide additional space for social meeting areas or coffee shops for students.

The word quadrangle was originally synonymous with quadrilateral, but this usage is now relatively uncommon.[1]

Some modern quadrangles resemble cloister gardens of medieval monasteries, called garths, which were usually square or rectangular, enclosed by covered arcades or cloisters. However, it is clear from the oldest examples (such as Mob Quad) which are plain and unadorned with arcades, that the medieval colleges at Oxford and Cambridge were creating practical accommodation for college members. Grander quadrangles that look like cloisters came later, once the idea of a college was well established and benefactors or founders wished to create more monumental buildings.[2]

In North America, Thomas Jefferson's design for the University of Virginia centered the housing and academic buildings in a Palladian form around three sides of the Lawn, a huge grassy expanse. Later, some American college and university planners imitated the Jeffersonian plan, the Oxbridge idea, Beaux-Arts forms, and other models. The University of Chicago's Gothic campus is also notable for its innovative use of quadrangles. All five barracks at The Citadel (military college) feature quadrangles with red-and-white squares (the colors of the South Carolina battle flag), which are used for formations by the Corps of Cadets.

Quadrangles are also found in traditional Kerala houses (Naalukettu) and is known as the Nadumittam ("Middle Space").[3]