The Queen Elizabeth II Silver Jubilee Medal (French: Médaille du jubilé de la reine Élisabeth II) was a commemorative medal created in 1977 to mark the twenty-fifth anniversary of Elizabeth II's accession in the United Kingdom, Canada, Australia, and New Zealand. The medal was physically identical in all realms where it was awarded, save for Canada, where it contained unique elements; as an internationally distributed award, the Queen Elizabeth II Silver Jubilee Medal holds a different place in each country's order of precedence for honours.

Until 1977, the practice for coronation and jubilee medals was for authorities in the United Kingdom to decide on a total number of medallions to be produced and allocate how many were to be distributed to each of the British Empire and Crown dependencies and possessions, and later Commonwealth of Nations countries. From that point, the award of the medals was at the discretion of the local government authority. Thus, for the Queen Elizabeth II Silver Jubilee Medal, which was created by a Royal Warrant from the Queen,[1] 30,000 were distributed in Britain, 1,507 in New Zealand,[1] 6,870 in Australia, and 30,000 in Canada.[2]

The Queen Elizabeth II Silver Jubilee Medal is in the form of a 32 millimetres (1.3 in) diameter silver disc with, on the obverse, the words ELIZABETH II DEI GRA. REGINA FID. DEF. (Latin abbreviation for "Elizabeth II, by the Grace of God, Queen, Defender of the Faith") surrounding an effigy of Queen Elizabeth II, symbolising her role as fount of honour.[3] On the reverse is a crown atop a wreath that contains the words THE 25th YEAR OF THE REIGN OF QUEEN ELIZABETH II 6 February 1977 in six lines. The Canadian version was identical, except that the medal was slightly thicker, the crown on the Queen's effigy was more upright, and the reverse bore a stylised maple leaf with CANADA above and the Royal Cypher below.[4] This medallion is worn on the left chest, suspended from a bar on a 31.8 millimetres (1.25 in) wide white ribbon with cardinal red bands along the edges, each 1mm wide, and a 7mm wide garter blue stripe down the centre, bisected by another 1mm wide line of cardinal red; the colours carried on the tradition for jubilee medals.[1] Like the Police Long Service and Good Conduct Medal and Queen's Police Medal medal bars were also available.[4] A certificate was also given with the medal. 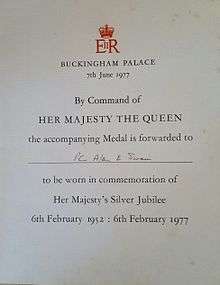 Eligibility and allocation in Canada

The Canadian medal was intended to award individuals who had been deemed to have made a significant contribution to their fellow citizens, their community or to Canada. So that all regions of the country would be recognised equally, the federal, provincial, and civic governments all forwarded names to Rideau Hall, as did private organisations in the fields of the arts, sports, philanthropy, and charity. The full membership of the Order of Canada and Order of Military Merit, as well as all recipients of Canadian Bravery Decorations received the Queen Elizabeth II Silver Jubilee Medal automatically, while for members of the Canadian Forces, merit with length of service and prestige of current appointment was considered.[4]

Some orders of precedence are as follows: