Rémy Di Gregorio (born 31 July 1985) is a French road bicycle racer, who rides for UCI Continental Delko–Marseille Provence KTM.[1] He has previously competed professionally for Cofidis in 2012, after moving from Astana after the 2011 season.[2] 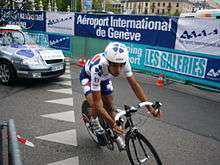 He rode his first Tour de France in 2007. He broke his elbow in a crash on the fourth stage. He finished the stage 7m 58s behind the leader and left the race. He broke clear on the 10th stage of the 2008 Tour de France edition, on Bastille Day, and led until the final climb.

On 10 July 2012, the first rest day of the 2012 Tour de France, Remi di Gregorio was arrested by French police on suspicion of doping.[3] In April 2013, it was revealed that Di Gregorio could resume his career, since the products found in his possession at the Tour turned out to be vitamins. Prosecutors said the case was not formally closed. Di Gregorio maintained he has never doped and successfully sued Cofidis for unfair dismissal.[4][5]

Di Gregorio returned to the professional peloton in 2014, with Team La Pomme Marseille 13.[1]