The 2008 Tour de France was the 95th running of the race. The event took place from 5 to 27 July. Starting in the French city of Brest, the tour entered Italy on the 15th stage and returned to France during the 16th, heading for Paris, its regular final destination, which was reached in the 21st stage. The race was won by Carlos Sastre.

Unlike previous years, time bonuses were no longer awarded for intermediate sprints and for high placement on each stage. This altered the way the General Classification was awarded in comparison to previous seasons.

Long running disputes between the event organisers, the ASO and the UCI[2] reached a head when the race organisers insisted upon the right to invite, or exclude, whichever teams it chose for the event. Under UCI rules, any ProTour event must be open to all member teams of the UCI's top level. The ASO made it clear that, despite changes in team management and personnel, it intended to exclude Astana from the event as a result its involvement in the doping scandals that marred the 2007 Tour and its links to the 2006 Operación Puerto doping case. This meant that the champion (Alberto Contador) and third-place finisher (Levi Leipheimer) from 2007, both of whom had since signed with Astana, could not compete in the 2008 Tour.[3]

The ASO announced on 20 March 2008 that all ProTour teams except Astana would be invited, along with three wildcard teams: Agritubel, Barloworld, and Slipstream–Chipotle (subsequently renamed as Garmin–Chipotle–H30[4]). With each team consisting of nine riders, 180 riders started the Tour.

The teams entering the race were:[5]

The 2008 Tour de France was almost entirely in France, with only a small part in Italy. In previous years, the Tour started with a prologue, followed by a week of flat stages. The flat stages were dominated by the sprinters' teams, and the yellow jersey was worn by a sprinter who had a good prologue. At the presentation of the Tour de France 2008 schedule, Tour Director Christian Prudhomme announced that the 2008 Tour would be different: "We have wanted a first week of racing with much more rhythm. With no prologue, an uphill finish that will suit different types of sprinters at the end of stage one, with a short time trial on stage four and the first mountain at Super-Besse only 48 hours later, we have decided to change the scenario."[9] The time bonuses at the end of each stage were removed, and there was 82 kilometres (51 mi) of time trials, less than usual. 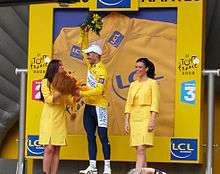 Romain Feillu was the only French cyclist to wear the yellow jersey in the 2008 Tour de France; he wore it for one day after stage 3.

In the first week of the 2008 Tour de France, the stages were mostly flat. As traditionally in the Tour de France, this resulted in small breakaways of cyclists, and the sprinters' teams trying to get them back. In the first stage, the sprinters won, with Thor Hushovd winning the stage, but in the second stage, four cyclists managed to stay away. The fourth stage was a time trial, won by Stefan Schumacher, who took over the lead. In the fifth stage, the sprinters won the battle and Mark Cavendish won the stage.

The Massif Central mountains were visited in stage six and seven. In stage six, all the breakaways were caught, and the favourites stayed together and finished together. In stage seven, the same scenario, only now Luis León Sánchez managed to stay a few seconds ahead and win the stage. The eighth stage was a sprinter stage, won by Cavendish. Then, from stage nine, the Pyrénées were climbed. Riccardo Riccò broke away from the bunch on the final climb, and won the stage. On stage 10, a group of four with some main contenders escaped, and Leonardo Piepoli won the stage. Stage eleven had easier climbs, and a group of four riders, not important for the overall classification, were allowed to break away and win 14 minutes.

Stages twelve to fourteen were flat stages, and were dominated by the sprinters. Mark Cavendish won another two stages, and Óscar Freire took his first. In the fifteenth stage, a group of four cyclists escaped and stayed away, a similar thing happened in stage sixteen. In the seventeenth stage, Carlos Sastre placed his decisive attack for the general classification, and also won the stage. The eighteenth and nineteenth stage again saw breakaways of cyclists not important for the general classification. The twentieth stage, a time trial, was won by Stefan Schumacher who had also won the first time trial. The last stage was a sprinters' stage, won by Gert Steegmans. 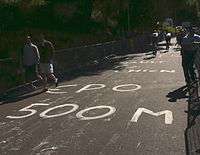 Writing on the street during Tour de France 2008 at Alpe d'Huez, satirically saying that EPO is available in 500 meters.

On 26 May 2008, the 2007 green jersey (points) winner Tom Boonen tested positive for cocaine. Since this was outside competition, Boonen was not sanctioned by the UCI or WADA, but he was nevertheless barred from the 2008 Tour de France.[14][15]

Following protracted disagreement between the organisers of the Tour de France (ASO) and the UCI, the race was sanctioned by the Fédération Française de Cyclisme (FFC), as was the 2008 Paris–Nice in March. Thus the FFC were in charge of the doping controls before and during the race, and rather than increasing the number of doping controls during the Tour, they applied a more targeted approach on suspect riders.[16] The French government's anti-doping agency AFLD carried out approximately 60 random and targeted tests in the weeks leading up to the Tour. They took blood samples from all the 180 riders in a two-day period just before the first stage, and during the race took samples from up to 14 riders a day shortly after the stage was finished, 250 tests being run in total.[17] The Italian National Olympic Committee (CONI) also performed unannounced doping tests of riders at the finish of stage 15, which ended at the ski resort of Prato Nevoso, Italy.[18] On 3 July 2008, France enacted a law criminalizing using or trafficking in doping substances.[19]

On 11 July news broke that Spanish rider Manuel Beltrán tested positive for erythropoietin after the first stage of the tour. Blood abnormalities before the tour start had led AFLD to target the rider. Beltrán's team Liquigas withdrew him from the tour with immediate effect. French law enforcement authorities questioned Beltrán over possible offences and searched his hotel room, but he claimed his innocence. The B-Sample has not yet been tested.[20]

On 13 July, prior to the ninth stage, it was revealed that AFLD had informed team doctors that five riders had unusually high hematocrit levels. The Italian press reported that Riccardo Riccò, who won the stage later that day, had been selected for testing several times during the first week, which led to a suspicion that he was among those whose teams had been notified. Riccò has for some time been known to have a naturally high hematocrit level of 51%, above the 50%-level which usually is taken to be an indicator of possible blood manipulation. Riccò stated that he has a license confirming that this is a natural, long-term condition, which he gave to the doping agencies before the start of the race,[21] but he later admitted to the offence at a hearing of the Italian National Olympic Committee (CONI).[22]

On 16 July Barloworld started the 11th stage without Moisés Dueñas, who had been withdrawn from the team after being tested positive for EPO at the end of the time trial fourth stage.[23] Barloworld Ltd, two days later, announced that they were withdrawing from sponsorship after this year's Tour de France,[24] but on 28 October, they announced that they would sponsor the team for another year.[25] 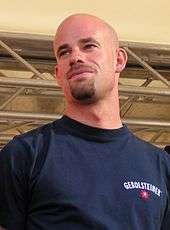 On 17 July, shortly before the start of stage 12, Ricardo Riccò and the rest of the Saunier Duval-Scott team, withdrew from the race after the announcement that he had tested positive for MIRCERA, a new type of EPO, at the end of stage 4.[26][27] Leonardo Piepoli, winner of stage 10, was sacked by his team for "violation of the team's ethics code" the following day, though no positive test was reported at that time.[28] Almost 3 months later his tests came back positive for samples taken one day prior to the start of the Tour, on 4 July, and also on 15 July, on the rest day in Pau.[29]

On the last day of the race, but after the end of the stage, Dmitry Fofonov was announced to have tested positive for the banned stimulant heptaminol after Stage 18. He was asked for a medical exemption to use the stimulant, but did not produce one.[30] He was subsequently fired by his team Crédit Agricole.[31]

After the race ended, French cyclist Jimmy Casper was suspended from Agritubel because he tested positive after the stage to Super Besse for glucocorticoids, an asthma drug that is banned unless the user has a medical exemption for its use. Casper, an asthmatic, carried a therapeutic use exemptions (TUE) for the last twelve years but failed to renew this exemption. His authorisation expired on 29 May and was not renewed before the 2008 Tour de France.[32] The French cycling federation's disciplinary commission exonerated Casper.[33]

In late September it was announced that several Tour de France riders were to have their blood samples retested for traces of EPO. Pierre Bordry, the head of AFLD, claimed the testing involved riders who were already under scrutiny for suspicious urine samples. AFLD had suspicion that there was MIRCERA in some samples but the laboratory could not say definitively. The urine tests were somewhat unreliable at giving definitive results, so the AFLD decided to order the blood samples taken before and during the Tour for additional testing with a newly developed CERA blood test.[34][35]

As a result of this additional testing, both Leonardo Piepoli and Stefan Schumacher tested positive for the same substance which Riccò used, MIRCERA. The riders were declared positive by AFLD.[29]

On 13 October 2008, the AFLD announced that Bernhard Kohl, who finished in third place overall and winner of the climbers' competition, had also tested positive for MIRCERA on 3 and 15 July, before and during the Tour de France.[36][37] Initial results were verified, and Kohl also confessed to doping. His third-place overall finish in the 2008 Tour and his first place in the King of the Mountains competition are considered vacancies in the Tour's official history.[n 2]

A total prize fund of approximately €3.25 million was awarded throughout the tour. In addition, each team received €51,243 towards expenses of participation, with an additional €1,600 per rider who completed the race, provided that at least seven did so.[41][42]

By tradition, a team's winnings were pooled and shared among the riders and support team. Team CSC, the team of Tour winner Sastre, won the most prize money, more than €600,000. Saunier Duval's prize money was not awarded after the positive tests of Riccardo Riccò.[43]

Team CSC received €450,000 for the overall victory of Carlos Sastre.