Rønde (or Roende) is a town on the southern part of the peninsula, Djursland in Denmark, Northern Europe, 23 kilometers north-east of the north end of Denmark’s second largest city, Århus. It is in part a pendler town to Århus, with a motorway entering Århus from the north. Rønde is located between Århus, and Århus Airport with a 12 kilometer drive from Rønde to the airport.

Rønde is placed in hilly country overlooking Århus Bay with 2.5 kilometers to the bay and the marina, Nappedam. The closest sandy beach for swimming lies in Følle Strand, 3.4 kilometers from Rønde. 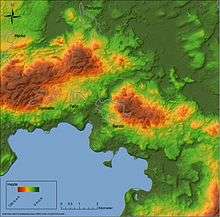 Elevation map with town limits for the Rønde area. To the west the town is located in a glacial valley, and to the east it stretches up a moraine hill.

View from hill top by Rønde over parts of the town with Følle Bay, Århus Bay and Jutland in the background.

Rønde is a hill town, with a 95 meter difference in elevation between the lowest and highest part. This kind of grade difference is unusual for Denmark, where the overall highest point in the country is 172 meters above sea level.

Rønde has a temperate coastal climate with an average summer temperature in July of 20 degrees Celsius in the day, and 12 degrees at night, and an average winter temperature in January with 5 degrees in the day and 1 degree at night (1961 – 1990) [2] The average precipitation is 722 millimeters per year,[2] making relatively flat Denmark well suited for farming. Barley, wheat, canola, and in recent years corn, are common crops in the farmland surrounding Rønde as well as in the rest of Denmark.

There is a public and a private primary school in Rønde, as well as a high school with boarding. Rønde also has a vocational school with a number of lines related to crafts, commerce and computer oriented specializations.

Rønde has also got a Folk High School and an Efterskole. The two later are types of boarding schools, that young people in Denmark can choose optionally, typically for a year, to cultivate special interests such as sports and aspects of culture, such as theatre, or as a means of strengthening their academic skill. Often as a break before continuing in the more mainstream education system.

A neighboring smaller town, Ugelbølle, has got a recently established private primary school, Ugelbølle Friskole. Ugelbølle has also got an industrial area, and a newer residential neighborhood dominated by over the average priced housing. All of the houses have a view of over Århus Bay. Ugelbølle lies 1.5 kilometer from the western outskirts of Rønde. The two towns are likely to merge in the coming years.

Another private primary school close to Rønde is Syddjurs Friskole 5.8 kilometers from Rønde.

Århus University has got a bioscience department at the Kalø Estate just east of Rønde.

The main road through Rønde is also a route from the city of Århus to residential and summer house areas on the southern part of the peninsula, Djursland. Also therefore Rønde is a local shopping centre. There are a number of shops, supermarkets, trades, crafts and restaurants in the town.

Peninsula with Kalø Castale Ruin and part of Hestehave Skov. The photo was taken from a hilltop burial mound in the eastern outskirts of Rønde. 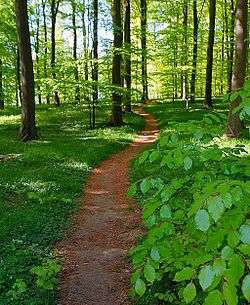 Path through beech wood in spring at Hestehave Skov by Rønde.

At the southern outskirts of Rønde the recreational wood, Hestehave Skov, spans downhill to the sea at Århus Bay. The wood is state owned and has a network of footpaths and gravel roads used by the inhabitants of Rønde and others.[3] Next to Hestehave Skov lies the Kalø Castle Ruin 2.5 kilometers from Rønde, placed on an island with a cobbled middle age road on a dam leading to the ruin. The place is a tourist attraction.[3]

Rønde lies next to the coastal, National Park Mols Bjerge, covering a hilly area by the sea with many bays and coves. One of the two main roads to the tourism based coastal town, Ebeltoft in the park, passes through Rønde. Ebeltoft is 20 kilometers from Rønde to the south-east located on the southern part of the peninsula, Djursland.

A road from Århus to another coastal town, Grenå, passes through Rønde, with 33 kilometers to Grenå. Grenå is a coastal town with part of the economy based on tourism, for a large part due to a sandy beach facing the Kattegat sea between Denmark and Sweden. Grenå is also a seaport with a ferry connection to Varberg in Sweden, as well as being a town based on industry and education.[3]

There are many summer rentals and summer houses on the coastlines of the peninsula Djursland, including at the village, Følle Strand, 3.4 kilometers from the Rønde.[3]

From Rønde one can travel to the island, Zealand, where the Danish capital, Copenhagen, is, via car and ferry sailing either from Ebeltoft or Århus, reaching the capital in approximately two and a half hours. It is also possible to drive all the way via bridges over the island, Fyn, to Zealand. This is a three and a half hour drive.[4]

Public transportation in Denmark is often comprehensive. Rønde has a recently built a bus terminal. The town is a bus-hub for southern Djursland, including regular connections to Århus.[3]