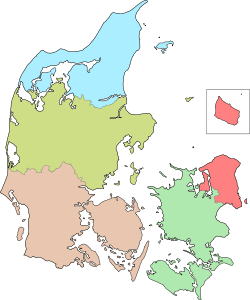 The Regions of Denmark were created as part of the 2007 Danish Municipal Reform. The five regions replaced the former counties (amter). At the same time, the number of municipalities (kommuner) was cut from 270 to 98. The reform was made effective on 1 January 2007. Each regional council has 41 members, among whom the regional chairman is chosen.

Unlike the counties, which they replaced to a large extent, the regions are not municipalities and therefore do not have the right to display coat of arms, but they do have logotypes. They do not themselves levy any taxes, but are financed only by block grants which are coming from a tax levied by the central government and partly from taxes collected by their constituent municipalities. The taxes of the municipalities was increased by 3 percentage points from 1 January 2007. These 3 percent are for patient care, which was previously a part of the county tax. The counties were financed both through their own county tax and in addition through block grants from central government.

Their representative organisation Danske Regioner was set up 23 March 2006. It is an advocacy organisation speaking on behalf of all of the regions, including negotiating i.e. labor contracts, etc. They also maintain an office in Brussels.

The naming of the regions in English are not uniform. The government often uses the Danish names[1] or directly translated English names (e.g. Greater Copenhagen, Zealand, North Jutland, Southern Denmark, Central Jutland).[2] The regions themselves partially use other names in English, substituting 'Jutland' for 'Denmark', as shown below.

Note.Source:Statistikbanken.dk/Befolkning og valg/Folketal/Table BEV107. Numbers for the year 2006 are pro forma to be a reference, an example, to compare (neighboring) regions and changes in population numbers when the economy was expanding, growing as opposed to when it was contracting.

The most important area of responsibility for the new regions is the public health service. They are also responsible for employment policies and public mass transit (buses and a few local railways). However, in eastern Denmark (Region Zealand and the Capital Region) the regions and 45 out of 46 municipalities share one employment region and transit is handled by a single transport agency, Movia. The remote Bornholm Regional Municipality situated in the Baltic Sea between Sweden and the westernmost part of Poland is a 100% owner of its own mass transit agency, BAT, formerly (before the island's county was abolished 1 January 2003) Bornholms Amts Trafikselskab and is its own employment region. Bornholm also solves other tasks that are normally carried out by the regions in the rest of Denmark - thus the name Bornholm Regional Municipality:Bornholm in some respects forms a region by itself.

Regions are led by directly elected councils (regionsråd); they consist of 41 members each. The head of the council is the regional council chairman (regionsrådsformand), who is elected by the council.[3] Elections are held simultaneously with municipal elections every four years. The latest Danish local elections were held on 19 November 2013.

Unlike the former counties, regions are not entitled to levy their own taxes. Thus, the present regions rely entirely on central state funding (around 70%) and funding coming from the municipalities (around 30%). A central government "health contribution" tax (sundhedsbidrag) which was 8.00% on the preliminary and final income statement forms when it was introduced from 2007 has replaced most of the county tax (amtsskat). With income taxes in the lowest bracket being raised 1 percentage point a year, this health contribution tax will be gone by 2019. 2012 this tax was lowered to 7%, 2013 6%, etc. 2016 it stood at 3.00% and 2017 it is 2%, 2018 1%.

90% of the budgets of the regions are allocated to the national health service. Health issues have remained the primary hot issue in regional politics, especially because grand changes of Denmark's hospital layout were announced immediately after the municipal reform.

The reform has been called the biggest reform in thirty years. It was an important policy issue for the former Liberal-Conservative cabinet, most importantly for Lars Løkke Rasmussen, then minister of the Interior and Health.

The abolition of the counties had long been an important goal for both the Conservatives and the Danish People's Party. 24 June 2004 the Danish People's Party decided to back the government's proposal for a structural reform of the public sector, thus securing a majority in the Danish parliament (Folketing), although the party had preferred just abolishing the counties without replacing them with a new intermediate administrative level (the other two being the central government and the municipalities). The parties who wanted to limit the regional tier of government prevailed insofar as the regions have no authority to levy any taxes, unlike the former counties.

The 5 state administrations (statsforvaltninger;singular statsforvaltning) are the representations of the central government in the five regions. They belong to The Ministry of the Interior and Health. Their jurisdictions follow the regional borders. These administrations are not subordinate to the regional councils, but rather the direct presence of the state (similar to governorates or prefectures in certain countries).

A state administration office exists in each region, supervising the daily business of municipalities and regions, and functioning as a body of appeal for citizens who wish to complain over a decision by the municipality or region. The offices also handle affairs concerning adoption, citizenship and divorces.

Each office is led by a Director of the State Administration (forvaltningsdirektør) who is a university graduate of law. 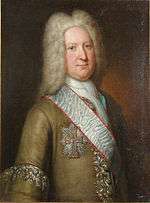 The predecessor of the 5 state administrations, before the 2007 reform, were the 15 state counties (plural,statsamter;singular,statsamt). One of these statsamter, the prefecture in Copenhagen Municipality, was called the 'Upper Presidium of Copenhagen' (Københavns Overpræsidium). Each of these were led by a governmental civil servant, the county prefect ((stats)amtmand). In Copenhagen he was called the 'Lord President of Copenhagen' (Københavns overpræsident), a title dating from 1747, but not widely known by the public. In some counties the prefect also performed the duty of overseeing the financial administration of the church as a diocesal county prefect (stiftamtmand), also being a part of the diocesan authorities within the National Church. This task is performed by the Director of the State Administration since 1 January 2007.

The county prefect was also the political leader of county councils until the first municipal reform of 1970, when this task was taken over by the county mayor (amtsborgmester) who was one of the elected county council members. In Copenhagen Municipality, the switch was made in 1938 when the title of Lord Mayor of Copenhagen (Københavns overborgmester) was created.

With the notable exception of cases concerning i.e. divorce and child custody, the general public are not acquainted with what goes on in the prefectures (from 1970) or the 5 State Administrations (from 2007). Also, the county prefect in his uniform would be the person to receive the Queen on her visits throughout the country.