Not to be confused with American Research and Development Corporation.
"RAND" redirects here. For other uses, see Rand (disambiguation).

RAND Corporation (Research AND Development[7]) is an American nonprofit global policy think tank[1] originally formed by Douglas Aircraft Company to offer research and analysis to the United States Armed Forces. It is financed by the U.S. government and private endowment,[5] corporations[8] including the health care industry, universities[8] and private individuals.[8] The organization has expanded to work with other governments, private foundations, international organizations, and commercial organizations on a host of non-defense issues. RAND aims for interdisciplinary and quantitative problem solving via translating theoretical concepts from formal economics and the physical sciences into novel applications in other areas, that is, via applied science and operations research. Michael D. Rich is president and chief executive officer of the RAND Corporation.[9]

RAND is home to the Frederick S. Pardee RAND Graduate School, one of the eight original graduate programs in public policy and the first to offer a Ph.D. The program aims to have practical value in that students work with RAND analysts on real-world problems. The campus is at RAND's Santa Monica research facility. The Pardee RAND School is the world's largest Ph.D.-granting program in policy analysis.[13] Unlike many other universities, all Pardee RAND Graduate School students receive fellowships to cover their education costs. This allows them to dedicate their time to engage in research projects and provides them on-the-job training.[13] RAND also offers a number of internship and fellowship programs allowing students and outsiders to assist in conducting research for RAND projects. Most of these projects are short-term and are worked on independently with the mentoring of a RAND staff member.[14]

RAND publishes the RAND Journal of Economics, a peer-reviewed journal of economics.

Thirty-two recipients of the Nobel Prize, primarily in the fields of economics and physics, have been involved or associated with RAND at some point in their career.[15][16]

General Henry H. Arnold, commander of the United States Army Air Forces, established Project RAND with the objective of looking into long-range planning of future weapons.[7][17] In March 1946 Douglas Aircraft Company was granted the contract to research on intercontinental warfare by adopting operations research. In May 1946 the Preliminary Design of an Experimental World-Circling Spaceship was released. In May 1948, Project RAND separated from Douglas and became an independent non-profit organization as Douglas Aircraft feared it would create conflicts of interest jeopardizing future hardware contracts. Initial capital for the split was provided by the Ford Foundation. 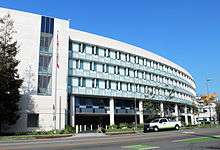 RAND was created after individuals in the War Department, the Office of Scientific Research and Development, and industry began to discuss the need for a private organization to connect military planning with research and development decisions.[14] On October 1, 1945, Project RAND was set up under special contract to the Douglas Aircraft Company and began operations in December 1945, expending a total of $640 in its first month of operation.[14] By late 1947, Project RAND considered operating as a separate organization from Douglas and in February 1948, the Chief of Staff of the newly created United States Air Force wrote a letter to the president of the Douglas Aircraft Company that approved the evolution of Project RAND into a nonprofit corporation, independent of Douglas.[14] On May 14, 1948, RAND was incorporated as a nonprofit corporation under the laws of the State of California and on November 1, 1948, the Project RAND contract was formally transferred from the Douglas Aircraft Company to the RAND Corporation.[14]

Since the 1950s, RAND research has helped inform United States policy decisions on a wide variety of issues, including the space race, the U.S.-Soviet nuclear arms confrontation, the creation of the Great Society social welfare programs, the digital revolution, and national health care.[18] Its most visible contribution may be the doctrine of nuclear deterrence by mutually assured destruction (MAD), developed under the guidance of then-Defense Secretary Robert McNamara and based upon their work with game theory.[19] Chief strategist Herman Kahn also posited the idea of a "winnable" nuclear exchange in his 1960 book On Thermonuclear War. This led to Kahn being one of the models for the titular character of the film Dr. Strangelove, in which RAND is spoofed as the "BLAND Corporation".[20][21]

RAND was incorporated as a non-profit organization to "further promote scientific, educational, and charitable purposes, all for the public welfare and security of the United States of America". Its self-declared mission is "to help improve policy and decision making through research and analysis", using its "core values of quality and objectivity".[6] 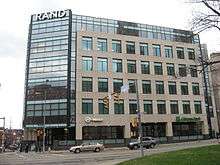 The achievements of RAND stem from its development of systems analysis. Important contributions are claimed in space systems and the United States' space program,[22] in computing and in artificial intelligence. RAND researchers developed many of the principles that were used to build the Internet.[23] RAND also contributed to the development and use of wargaming.[24][25]

RAND designed and conducted one of the largest and most important studies of health insurance between 1974 and 1982. The RAND Health Insurance Experiment, funded by the then-U.S. Department of Health, Education and Welfare, established an insurance corporation to compare demand for health services with their cost to the patient.[27][28]

According to the 2005 annual report, "about one-half of RAND's research involves national security issues". Many of the events in which RAND plays a part are based on assumptions which are hard to verify because of the lack of detail on RAND's highly classified work for defense and intelligence agencies. The RAND Corporation posts all of its unclassified reports in full on its website.

Over the last 60 years, more than 30 Nobel Prize winners have been involved or associated with the RAND Corporation at some point in their careers.