R.C. Pro-Am is a racing video game developed by Rare. It was released for the Nintendo Entertainment System (NES) by Nintendo for North America in 1988, and then in Europe on April 15 of the following year. Presented in an overhead isometric perspective, a single player races a radio-controlled car around a series of tracks. The objective of each track is to qualify for the next race by placing in the top three racers. Players collect items to improve performance, and they must avoid a variety of hazards such as rain puddles and oil slicks. It is an example of a racing game which features vehicular combat, in which racers can use missiles and bombs to temporarily disable opposing vehicles. Originally titled Pro Am Racing, R.C. Pro-Am was also ported to the Sega Genesis in 1992 as Championship Pro-Am, an enhanced remake with enhanced graphics and additional features. R.C. Pro-Am was followed by two sequels: Super R.C. Pro-Am in 1991, and R.C. Pro-Am II in 1992.

Listed by video game reviewers as one of Rare's first successful NES titles, R.C. Pro-Am was well-received for its visuals, sound, gameplay, and enjoyability. The game distanced itself from earlier racing titles by using an overhead, instead of a first-person, perspective. Reviews have cited it as inspiration for future games such as Super Off Road, Rock n' Roll Racing, and the Mario Kart series. It has appeared in many "top games of all time" lists and is regarded as one of the best titles in the NES library.

R.C. Pro-Am is a racing video game in which a player controls a radio-controlled car against three opponents around a track from an overhead isometric perspective.[1][2] Players use the horizontal buttons on the control pad to steer their car left or right, and they use the other buttons to accelerate, fire weapons, and pause the game.[3] Consisting of 24 tracks total,[1] the goal for each racer is to qualify for the next race by finishing in the top three in the four-car field. The game ends if players finish in fourth;[4] however, they have two continues in which they can restart the previous race, but they will lose all points accumulated up to that point.[5] For each successful completion of a race, the player receives a trophy; larger "High Score Trophies", leading up to the "Super Trophy", can also be obtained for achieving high scores.[6] After the game ends, players can record their scores on "Top Pro-Am Drivers" list, but the scores are erased when the console power is powered off.[7] 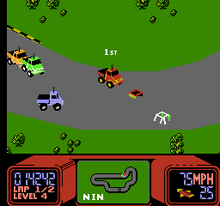 The player, represented by the red truck in the center, leads the race while about to collect a "bonus letter" and a roll cage.

Throughout the courses, there are items on the track that players can collect by driving over them. "Tune-up items" help increase the car's performance, such as turbo acceleration, "hotter engines" for higher top speed, and "super sticky tires" for increased traction and cornering;[1] these additional abilities are displayed on the "track conditions" screen between races.[8] Players can also collect weapons that can temporarily disable other vehicles: missiles take out the opposing vehicles from the front, while bombs take them out from the rear. The number of missiles and bombs carry over to the next race,[6] and players can collect extra ammunition, represented by stars, on the track.[1] Roll cages, which opponents can also collect, help protect cars from crash damage,[6] stationary "zippers" give cars an extra speed boost,[1] and "bonus letters" give players large point bonuses and the ability to drive an upgraded car if they can spell "NINTENDO" ("CHAMPION" in the Rare Replay version) with them. Players can upgrade from a standard truck to a faster 4-Wheeler and then to the fastest Off Roader.[9] There are also various hazards which must be avoided: oil slicks which cause cars to spin out of control, water puddles and "rain squalls" which slow them down, pop-up barriers which crash cars, and skulls which decrease ammunition. Excessive use of projectile weaponry on opponents will result in the yellow car accelerating to 127 mph, which cannot be matched by the player.[1]

The Sega Genesis port, Championship Pro-Am, features some gameplay differences from the NES version of the game. In this port, players race against five other vehicles instead of three,[10] but players must still place in the top three to move to the next track.[5] Another feature is that race records are recorded;[10] players are prompted to enter their name before the game start to track high scores and race records.[11] Finally, players try to successfully spell "CHAMPION" in order to upgrade to a new car.[12]

R.C. Pro-Am was developed by UK-based company Rare. In 1987, the game was originally titled Pro-Am Racing but was later renamed.[13] It was released for the Nintendo Entertainment System (NES) by Nintendo in 1987 in North America,[14] and in Europe on April 15 of the next year.[15] It would later be ported to the Sega Genesis under the name Championship Pro-Am and was released by Tradewest in 1992.[16] Its music was composed by David Wise, known for his work on Cobra Triangle as well as the Donkey Kong Country series.[17]

R.C. Pro-Am was subject to preview coverage in the Fall 1987 issue of Nintendo Fun Club News – the company's predecessor to its house organ Nintendo Power.[13] It received a more in-depth look into the game in the proceeding Winter 1987 issue, saying that "this game is a must for RC Car (radio-controlled) owners".[18] It was featured on the cover of the magazine's February–March 1988 issue, which also included a full walkthrough.[1] Later, in Nintendo Power' premiere issue in July 1988, R.C. Pro-Am was listed 6th on its "Top 30" NES games list, and it was the top "Dealer's Pick".[19] It went down to the 8th position in September 1988,[20] and 12th in November.[21]

R.C. Pro-Am was reviewed in Computer Gaming World who called it "a compelling, innovating approach to car racing video games". Bill Kunkel found that it distanced itself from earlier racing titles such as Sega's Enduro Racer, Nintendo's Mach Rider, and Atari's Pole Position by going from a more traditional first-person to an isometric perspective. He also praised the game's simplicity and controls, comparing them to that of an actual radio-controlled car. He criticized the game for its lack of a two-player feature and for the instruction booklet's vagueness. He concluded by lauding its graphics and sound, saying that they "help make this the best game of its kind ever produced in any electronic game format".[23] Bloomberg Businessweek listed R.C. Pro-Am, along with Cobra Triangle, as Rare's most notable titles in the NES library.[24]

The game has continued to be well received by contemporary video game publications. Allgame's Chris Couper stated that R.C. Pro-Am is among the best NES games, due to its realistic nature. He commented that the game's challenge and sounds contributed to its enjoyment level.[22] Retro Gamer saw the game as a precursor to Codemasters' Micro Machines, and they compared the action and variety of items to the later Mario Kart series. They hailed it as one of Rare's best early products, stating: "Radio-controlled car racing in videogame form was pretty much perfected here."[25] The 2009 book Vintage Games compared the game to Spy Hunter, noting that game emphasized collecting power-ups and weapons and not just on racing. It added how the trend of combining racing with vehicular combat would reappear in future games such as Super Mario Kart and Rock n' Roll Racing.[26] Later in 2010, as part of Rare's 25th anniversary, the magazine said that it was Rare's first successful NES title as well as one of the first games to combine racing and vehicular combat. Readers ranked the game 22nd in a list of their 25 favourite Rare games.[27] More recently, in 2016, VintageGamer.com praised R.C. Pro Am for still being enjoyable and challenging 28 years after its release.[28]

R.C. Pro-Am has appeared many times on various "best games" lists over the years. A survey conducted by GamePro in 1990 ranked the game as the 10th-best sports video game at that time.[29] Game Informer put the game at number 84 on its "Top 100 Games of All Time" list in August 2001.[30] Paste magazine placed it as the 8th greatest NES game ever, saying that it is "way more fun than real remote-control cars, which never seemed to be equipped with missile capabilities".[31] IGN listed the game as the 13th-best NES game of all time, citing its popularity amongst players as well as good sales. Executive Editor Craig Harris said that it was one of the first games to introduce the concept of vehicular combat, inspiring other titles such as Super R.C. Pro-Am, R.C. Pro-Am II, and the Mario Kart series.[32] 1UP.com listed it as the 14th best NES title, citing the game's good graphics and gameplay elements, though it said that the difficulty level was too high. As with other retrospectives, the website staff listed the game as inspiration for future series such as Super Off Road and Rock n' Roll Racing.[33] In a look back at Rare as part of the company's 25th anniversary, GamePro listed R.C. Pro-Am as one of Rare's best games, calling the release "one of Rare's finest moments".[2] The NES version of R.C. Pro-Am is one of the 30 games selected for the upcoming Xbox One compilation Rare Replay.