Radegund (also spelled Rhadegund, Radegonde, Radigund) (ca. 520–587) was a 6th-century Thuringian princess and Frankish queen, who founded the Abbey of the Holy Cross at Poitiers. She is the patron saint of several churches in France and England and of Jesus College, Cambridge (whose full name is "The College of the Blessed Virgin Mary, Saint John the Evangelist and the glorious Virgin Saint Radegund, near Cambridge"). 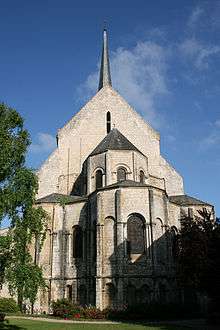 Radegund was born about 520 to Bertachar, one of the three kings of the German land Thuringia.[1] Radegund's uncle, Hermanfrid, killed Bertachar in battle, and took Radegund into his household. After allying with the Frankish King Theuderic, Hermanfrid defeated his other brother Baderic. However, having crushed his brothers and seized control of Thuringia, Hermanfrid reneged on his agreement with Theuderic to share sovereignty.

In 531, Theuderic returned to Thuringia with his brother Clotaire I (also known as Chlothar). Together they defeated Hermanfrid and conquered his kingdom. Clotaire I also took charge of Radegund, taking her back to Merovingian Gaul[1] with him. He sent the child to his villa of Athies in Picardy for several years, before marrying her in 540.[2]

Radegund was one of Clotaire I’s six wives or concubines (the other five being Guntheuca who was the widow of his brother Chlodomer, Chunsina, Ingund, Ingund’s sister Aregund and Wuldetrada the widow of Clotaire's grand-nephew Theudebald). She bore him no children. Radegund was noted for her almsgiving.[3]

By 550 Radegund's brother was the last surviving male member of the Thuringian royal family. Clotaire had him murdered. Radegund fled the court and sought the protection of the Church, persuading the bishop of Noyon to appoint her a deaconess;[1] founding the monastery of Sainte-Croix in Poitiers circa 560, where she cared for the infirm. She ate nothing but legumes and green vegetables: neither fruit nor fish nor eggs. Radegund was widely believed to have the gift of healing.[3]

Living under the Rule for Virgins of Caesarius of Arles, the nuns were required to be able to read and write, and to devote several hours of the day to reading the scriptures and copying manuscripts, as well as traditional tasks such as weaving and needlework.[4] This Rule strictly enclosed women, to the point that nuns of Sainte-Croix were unable to attend Radegund's funeral.

Her abbey was named for the relic of the True Cross that Radegund obtained from the Byzantine Emperor Justin II. Although the bishop of Poitiers Maroveus refused to install it in the abbey, at Radegund's request king Sigebert sent Eufronius of Tours to Poitiers to perform the ceremony. To celebrate the relic and its installation into Sainte-Croix, Venantius Fortunatus composed a series of hymns, including the famous vexilla regis, considered to be one of the most significant Christian hymns ever written, which is still sung for services on Good Friday.

Radegund was a close friend of Junian of Maire; Junian and Radegund are said to have died on the same day, August 13, 587.[5]

The poet Venantius Fortunatus and the bishop, hagiographer, and historian, Gregory of Tours, were close friends with Radegund and wrote extensively about her. She wrote Latin poems to Fortunatus on tablets that have been lost. The three of them seem to have been close and Fortunatus' relations with Radegund seem to have been based on friendship. There are two poems written in the voice of Radegund, De Excidio Thoringiae and Ad Artachin. While it has been proposed that Venantius wrote them, recent historians see her as the author.[6]

Another vita was authored by the nun Baudovinia following a rebellion at the abbey described by Gregory of Tours.

Radegund's funeral, which Venantius Fortunatus and Gregory of Tours attended, was three days after her death. She was buried in what was to become the Church of St. Radegonde in Poitiers. Her tomb can still be found in the crypt of that church, which remains the center of devotion to her. In the 1260s a church decoration program included stained-glass windows depicting Radegund's life. These were later largely destroyed by Huguenots. 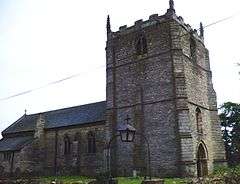 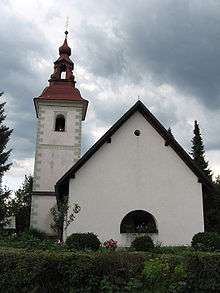 Five English parish churches are dedicated to her, and she had a chapel in Old St Paul's Cathedral, as well as in Gloucester, Lichfield, and Exeter Cathedrals. St. Radegund's Abbey, near Dover, was founded in her honour in 1191, and Longleat Priory in Wiltshire was also dedicated to her. She is also a patron saint of Jesus College, Cambridge, which was founded on the site of the 12th century Priory of Saint Mary and Saint Radegund.

The St Radegund public house in Cambridge is named in her honour. St Rhadagund's Holiday and Conference Centre on the Isle of Wight is also named after her.

There are many places named Sainte-Radegonde in France.