A Norwegian rally team is trying to complete one of the more difficult stages of the Budapest-Bamako rally in 2014.

While off-road Rally Raiding is dominated by the Dakar Rally, a multiple event World Cup exists, the FIA Cross-Country Rally World Cup. For amateurs the Budapest-Bamako has been considered the world's largest amateur rally raid spanning two continents and 9000 kilometers. [4]

Navigation is accomplished using a roadbook and also with GPS.[5]

The three major competitive groups in rally raid are the motorcycle (moto) class, the car class, ranging from buggies to SUVs, and the T4 & T5 truck class.

Popular motorcycles include those made by KTM and Yamaha because many of their bikes have finished in top positions. BMW motorcycles, Ducati and Aprilia have also been successful in the Dakar.

Prominent examples in the Car Class included the Mitsubishi Pajero/Montero, the Volkswagen Race Touareg, the Bowler Wildcat 200 and the Nissan Navara. 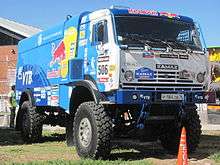 The T4 Group is made up of trucks that actually participate in the competition, while the T5 Group is reserved for rally support trucks, which means they travel from bivouac to bivouac to support other competition vehicles.[8] The T4 Group is further divided into two subgroups: the T4.1 class for production trucks, and the T4.2 class for modified trucks.[9] T4 trucks may provide assistance during the special stages, but must be homologated vehicles. T5 trucks do not have to be homologated.[8]

The T4 Group has been composed of vehicles manufactured by Tatra, LIAZ, Volkswagen, Kamaz, Hino, Isuzu, MAN, DAF, MAZ, ZiL, Mercedes-Benz Unimog, Renault Kerax, Scania, Iveco and GINAF. In the 1980s, a strong rivalry between DAF and Mercedes-Benz led to vehicles which had twin engines and more than 1000 hp (750 kW). Later Tatra, and Kamaz took the race up. After 2000, renewed competition started in the truck class between DAF, Tatra, Mercedes-Benz and Kamaz.