Ramsha (Aramaic: ܪܡܫܐ‎‎) is the Aramaic or East Syriac term for Evening Liturgy being followed as a part of the Liturgy of the Hours in the Syriac Churches.[1] In the East Syrian tradition, a liturgical day begins with the Ramsha at 6:00 pm.[2]

Liturgy of the Hours in the Syriac tradition 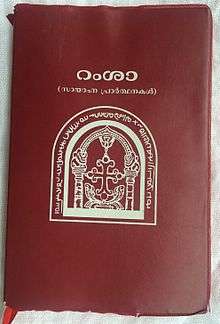 The Liturgy of the Hours was known by several names such as the Divine Prayers, Divine Office and Canonical Hours. In accordance with the Jewish tradition, the following are the seven times of prayer in the Syriac Churches: