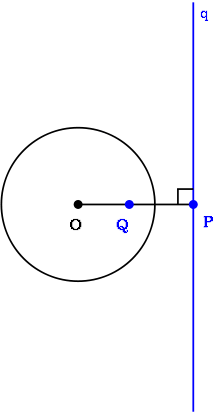 The polar line q to a point Q with respect to a circle of radius r centered on the point O. The point P is the inversion point of Q; the polar is the line through P that is perpendicular to the line containing O, P and Q.

In geometry, the pole and polar are respectively a point and a line that have a unique reciprocal relationship with respect to a given conic section. If the point lies on the conic section, its polar is the tangent line to the conic section at that point. 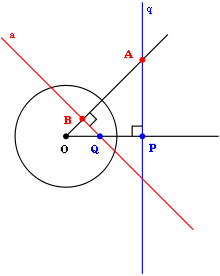 There is another description of the polar line of a point P in the case that it lies outside the circle C. In this case, there are two lines through P which are tangent to the circle, and the polar of P is the line joining the two points of tangency (not shown here). This shows that pole and polar line are concepts in the projective geometry of the plane and generalize with any nonsingular conic in the place of the circle C. 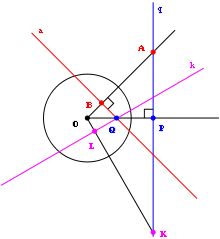 Illustration of the duality between points and lines, and the double meaning of "incidence". If two lines a and k pass through a single point Q, then the polar q of Q joins the poles A and K of the lines a and k, respectively.

The concepts of a pole and its polar line were advanced in projective geometry. For instance, the polar line can be viewed as the set of projective harmonic conjugates of a given point, the pole, with respect to a conic. The operation of replacing every point by its polar and vice versa is known as a polarity.

A polarity is a correlation that is also an involution. 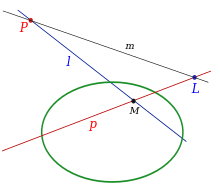 Line p is the polar line to point P, l to L and m to M 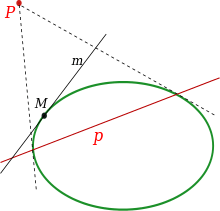 The concepts of pole, polar and reciprocation can be generalized from circles to other conic sections which are the ellipse, hyperbola and parabola. This generalization is possible because conic sections result from a reciprocation of a circle in another circle, and the properties involved, such as incidence and the cross-ratio, are preserved under all projective transformations.

Calculating the polar of a point

A general conic section may be written as a second-degree equation in the Cartesian coordinates (x, y) of the plane

where Axx, Axy, Ayy, Bx, By, and C are the constants defining the equation. For such a conic section, the polar line to a given pole point (ξ, η) is defined by the equation

where D, E and F are likewise constants that depend on the pole coordinates (ξ, η)

Calculating the pole of a line

The pole of the line

, relative to the non-degenerated conic section

can be calculated in two steps.

First, calculate the numbers x, y and z from

Now, the pole is the point with coordinates

If a point P lies on a line l, then the pole L of the line l lies on the polar p of point P.

If a point P moves along a line l, its polar p rotates about the pole L of the line l.

If two tangent lines can be drawn from a pole to the conic section, then its polar passes through both tangent points.

If a point P lies on its own polar line, then P is on the conic section.

Each line has, with respect to a non-degenerated conic section, exactly one pole.

Poles and polars were defined by Joseph Diaz Gergonne and play an important role in his solution of the problem of Apollonius.[1]