For other uses, see Point reflection.

The concept of inversion can be generalized to higher-dimensional spaces.

Inverse of a point 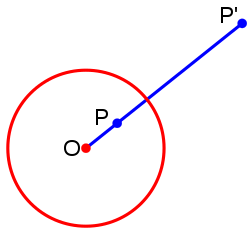 P'is the inverse of P with respect to the circle.

To invert a number in arithmetic usually means to "take its reciprocal". A closely related idea in geometry is that of "inverting" a point. In the plane, the inverse of a point P with respect to a reference circle (Ø) with center O and radius r is a point P', lying on the ray from O through P such that

It follows from the definition that the inversion of any point inside the reference circle must lie outside it, and vice versa, with the center and the point at infinity changing positions, whilst any point on the circle is unaffected (is invariant under inversion). In summary, the nearer a point to the center, the further away its transformation, and vice versa. 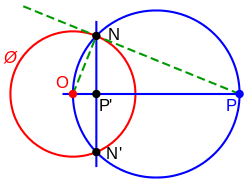 To construct the inverse P' of a point P outside a circle Ø: Let r be the radius of Ø. Right triangles OPN and ONP' are similar. OP is to r as r is to OP'.

To construct the inverse P' of a point P outside a circle Ø:

To construct the inverse P of a point P' inside a circle Ø:

The inversion of a set of points in the plane with respect to a circle is the set of inverses of these points. The following properties make circle inversion useful.

In addition, any two non-intersecting circles may be inverted into congruent circles, using circle of inversion centered at a point on the circle of antisimilitude.

The Peaucellier–Lipkin linkage is a mechanical implementation of inversion in a circle. It provides an exact solution to the important problem of converting between linear and circular motion.

If point R is the inverse of point P then the lines perpendicular to the line PR through one of the points is the polar of the other point (the pole). 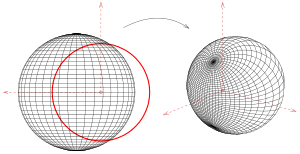 Inversion of a sphere at the red sphere

Inversion of a spheroid (at the red sphere) 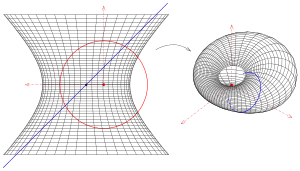 Inversion of a hyperboloid of one sheet

Circle inversion is generalizable to sphere inversion in three dimensions. The inversion of a point P in 3D with respect to a reference sphere centered at a point O with radius R is a point P ' such that

The most simple surface (besides a plane) is the sphere. The first picture shows a non trivial inversion (the center of the sphere is not the center of inversion) of a sphere together with two orthogonal intersecting pencils of circles.

The inversion of cylinder, cone and torus resp. results in a Dupin cyclyde.

Example hyperboloid of one sheet

Stereographic projection as the inversion of a sphere 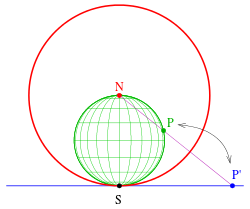 Stereographic projection as an inversion of a sphere

A stereographic projection usually projects a sphere from a point

(south pole). This mapping can be performed by an inversion of the sphere onto its tangent plane. If the sphere (to be projected) has the equation

, green in the picture), than it will be mapped by the inversion at the unit sphere (red) onto the tangent plane at point

. The lines through the center of inversion (point

) are mapped onto themselves. They are the projection lines of the stereographic projection.

The 6-sphere coordinates are a coordinate system for three-dimensional space obtained by inverting the Cartesian coordinates.

One of the first to consider foundations of inversive geometry was Mario Pieri in 1911 and 1912.[6] Edward Kasner wrote his thesis on "Invariant theory of the inversion group".[7]

More recently the mathematical structure of inversive geometry has been interpreted as an incidence structure where the generalized circles are called "blocks": In incidence geometry, any affine plane together with a single point at infinity forms a Möbius plane, also known as an inversive plane. The point at infinity is added to all the lines. These Möbius planes can be described axiomatically and exist in both finite and infinite versions.

A model for the Möbius plane that comes from the Euclidean plane is the Riemann sphere.

is invariant under an inversion. In particular if O is the centre of the inversion and

are distances to the ends of a line L, then then length of the line

under an inversion with centre O. The invariant is:

According to Coxeter,[8] the transformation by inversion in circle was invented by L. I. Magnus in 1831. Since then this mapping has become an avenue to higher mathematics. Through some steps of application of the circle inversion map, a student of transformation geometry soon appreciates the significance of Felix Klein’s Erlangen program, an outgrowth of certain models of hyperbolic geometry

The combination of two inversions in concentric circles results in a similarity, homothetic transformation, or dilation characterized by the ratio of the circle radii.

, then the reciprocal of z is

. Consequently, the algebraic form of the inversion in a unit circle is given by

Reciprocation is key in transformation theory as a generator of the Möbius group. The other generators are translation and rotation, both familiar through physical manipulations in the ambient 3-space. Introduction of reciprocation (dependent upon circle inversion) is what produces the peculiar nature of Möbius geometry, which is sometimes identified with inversive geometry (of the Euclidean plane). However, inversive geometry is the larger study since it includes the raw inversion in a circle (not yet made, with conjugation, into reciprocation). Inversive geometry also includes the conjugation mapping. Neither conjugation nor inversion-in-a-circle are in the Möbius group since they are non-conformal (see below). Möbius group elements are analytic functions of the whole plane and so are necessarily conformal.

Consider, in the complex plane, the circle of radius

where without loss a generality,

. Using the definition of inversion

it is straighforward to show that

describes the circle of center

, the circle transforms into the line parralel to the imaginary axis

As mentioned above, zero, the origin, requires special consideration in the circle inversion mapping. The approach is to adjoin a point at infinity designated ∞ or 1/0 . In the complex number approach, where reciprocation is the apparent operation, this procedure leads to the complex projective line, often called the Riemann sphere. It was subspaces and subgroups of this space and group of mappings that were applied to produce early models of hyperbolic geometry by Beltrami, Cayley, and Klein. Thus inversive geometry includes the ideas originated by Lobachevsky and Bolyai in their plane geometry. Furthermore, Felix Klein was so overcome by this facility of mappings to identify geometrical phenomena that he delivered a manifesto, the Erlangen program, in 1872. Since then many mathematicians reserve the term geometry for a space together with a group of mappings of that space. The significant properties of figures in the geometry are those that are invariant under this group.

In n-dimensional space where there is a sphere of radius r, inversion in the sphere is given by

The transformation by inversion in hyperplanes or hyperspheres in En can be used to generate dilations, translations, or rotations. Indeed, two concentric hyperspheres, used to produce successive inversions, result in a dilation or contraction on the hyperspheres' center. Such a mapping is called a similarity.

All of these are conformal maps, and in fact, where the space has three or more dimensions, the mappings generated by inversion are the only conformal mappings. Liouville's theorem is a classical theorem of conformal geometry.

will have a positive radius if a12 + ... + an2 is greater than c, and on inversion gives the sphere

Hence, it will be invariant under inversion if and only if c = 1. But this is the condition of being orthogonal to the unit sphere. Hence we are led to consider the (n − 1)-spheres with equation

which are invariant under inversion, orthogonal to the unit sphere, and have centers outside of the sphere. These together with the subspace hyperplanes separating hemispheres are the hypersurfaces of the Poincaré disc model of hyperbolic geometry.