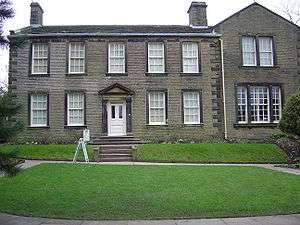 What is now the Brontë Parsonage Museum, former home of the Brontë family, Haworth, West Yorkshire from 1820–1861

A clergy house is the residence, or former residence, of one or more priests or ministers of religion.

Clergy houses are typically owned and maintained by a church, as a benefit to its clergy. The practice exists in many denominations because of the tendency of clergy to be transferred from one church to another at relatively frequent intervals. Catholic clergy houses in particular may be lived in by several priests from a parish. Clergy houses frequently serve as the administrative office of the local parish as well as a residence; they are normally located next to, or at least close to, the church their occupant serves.

Partly because of the general conservationism of churches, many clergy houses are of historic interest or even importance. In the United Kingdom the 14th-century Alfriston Clergy House was the first property to be acquired by the National Trust. It was purchased in a state of near ruin in 1896 for £10, the vicarage having moved elsewhere long before.[1]

In some countries where the clergy houses were often rather grand they have now been sold off by the churches, exchanged for more modest properties. In England the "Old Vicarage" or "Old Rectory" is very common in villages, as a comfortable home for the upper middle-classes, and in Scotland the "Old Manse". Others are now offices or used for various functions.

There are a number of more specific terms whose use depends on the rank of the occupant, the denomination and the locality. Above the parish level, traditionally a bishop's house was called a Bishop's Palace, a dean lives in a deanery, and a canon in a canonry or "canon's house". Other titles may have different names for their houses.

A rectory is the residence, or former residence, of an ecclesiastical rector, although also in some cases an academic rector (e.g. a Scottish university rector) or other person with that title. In North American Anglicanism a far greater proportion of parish clergy were and are titled rectors than in Britain, so the rectory is more common there. The names used for homes of the ordinary parish clergy vary considerably, and generalization is difficult: