This article is about the American artist. For the Dutch painter, see Rembrandt.

Rembrandt Peale (February 22, 1778 – October 3, 1860) was an American artist and museum keeper. A prolific portrait painter, he was especially acclaimed for his likenesses of presidents George Washington and Thomas Jefferson. Peale's style was influenced by French Neoclassicism after a stay in Paris in his early thirties. 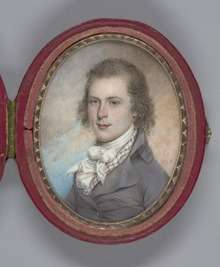 Miniature of Rembrandt Peale in 1795, by his uncle, James Peale

Rembrandt Peale was born the third of six surviving children (11 had died) to his mother, Rachel Brewer, and father, Charles Willson Peale in Bucks County, Pennsylvania, on February 22, 1778. The father, Charles, also a notable artist, named him after the noted 17th-century Dutch painter and engraver Rembrandt Harmenszoon van Rijn. His father also taught all of his children, including Raphaelle Peale, Rubens Peale and Titian Peale, to paint scenery and portraiture, and tutored Rembrandt in the arts and sciences. Rembrandt began drawing at the age of 8. A year after his mother’s death and the remarriage of his father, Peale left the school of the arts, and completed his first self-portrait at the age of 13. The canvas displays the young artist's early mastery. The clothes, however, give the notion that Peale exaggerated what a 13-year-old would look like, and Peale's hair curls like the hair of a Renaissance angel. Later in his life, Peale "often showed this painting to young beginners, to encourage them to go from 'bad' to better..."[1]

In July 1787, Charles Willson Peale introduced his son Rembrandt to George Washington, and the young aspirant artist watched his father paint the future president. In 1795, at the age of 17, Rembrandt painted an aging Washington, making him appear far more aged than in reality. The portrait was well received, and Rembrandt had made his debut.

At the age of 20, Peale married 22-year-old Eleanor May Short (1776–1836) at St. Joseph's Catholic Church in Philadelphia.[2] During their marriage, Peale and Short had nine children: Rosalba, Eleanor, Michael Angelo, Angelica, and Emma Clara among them.

In 1822, Peale moved to New York City where he embarked on an attempt to paint what he hoped would become the "standard likeness" of Washington. He studied portraits by other artists including John Trumbull, Gilbert Stuart and his own father, as well as his own 1795 picture which had never truly satisfied him. His resulting work Patriae Pater, completed in 1824, depicts Washington through an oval window, and is considered by many to be second only to Gilbert Stuart's iconic Athenaeum painting of the first president. Peale subsequently attempted to capitalize on the success of what quickly became known as his "Porthole" picture. Patriae Pater (Latin for "Father of Our Country") was purchased by Congress in 1832 for $2,000. It currently hangs in the Old Senate Chamber.[3]

In 1826 he helped found the National Academy of Design in New York City.

Peale went on to create over 70 detailed replicas, including one of Washington in full military uniform that currently hangs in the Oval Office. Peale continued to paint other noted portraits, such as those of the third president Thomas Jefferson while he was in office (1805), and later on a portrait of Chief Justice John Marshall. 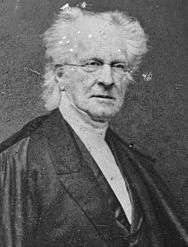 "The oldest living American artist", Detail of a photograph of Rembrandt Peale taken by Mathew B. Brady

Noted for his "itinerant" nature, Peale visited Europe several times to study art (Ward). Throughout his life, Peale traveled across the Western Hemisphere in search of inspiration and opportunities as an artist. His father helped pay his way to Paris, where he stayed from June to September 1808, and again from October 1809 to November 1810. In Paris, Peale studied the works of Jacques-Louis David, which influenced him to paint in the Neoclassical style. He painted the famous explorer Alexander von Humboldt and several other noted patrons such as Joseph Louis Gay-Lussac and François André Michaux.

After his successes in France, Peale returned to Philadelphia in 1810. His efforts to establish his knowledge and mastery of art were displayed in his painting The Roman Daughter (1812). The painting was deemed too “sensational” by the people of Philadelphia,[4] who were unsympathetic to his endeavors toward “improving the state of fine arts in America” in the 19th century.[5] Amid the economic hardship of the War of 1812, President Jefferson—who promised to buy the 1795 portrait of Washington, but could not keep his promise—instead encouraged Peale to go to Europe, as "we have genius among us but no unemployed wealth to reward it".[6] 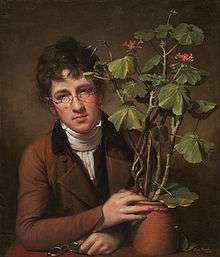 Motivated by his father’s establishment of the American Museum of Philadelphia (1786) and having been unsuccessful in Philadelphia, Rembrandt Peale assumed his father’s role in another city. On August 15, 1814, Peale launched his first museum as soon as he arrived in the municipality of Baltimore, Maryland on Holliday Street between East Saratoga and Lexington Streets, first building constructed in America to serve as a museum (later served as second Baltimore City Hall, 1830–75,an African-American school and restored in 1931 as Municipal Museum. Renovated and restored again in 1981, it was reopened as the Peale Museum. The museum merged with Baltimore City Life Museums system in 1985 and closed in 1997. Originally premeditated as an Arts and Sciences museum, Peale decided to display only works of art and manufactured products instead.

The museum was elaborately illuminated by gas light, following the example of his brother Rubens in Philadelphia. This innovation made a great impression. Peale had acquired an important gas lighting patent, and with some associates founded the successful Gas Light Company of Baltimore. Having poor business sense, though, he did little to manage the company and was forced out after a few years due to the War of 1812.[7][8]

In 1828, an ambitious Peale raised funds and tried earning money for his previous paintings, in order to travel to Rome. He took along his 15-year-old son, Michael Angelo, a determined young artist who copied his father's paintings in admiration.[9] Peale successfully displayed portraits of Horatio Greenough and Patriæ Pater in Florence Academy.

Peale died June 12, 1860 in Philadelphia and is buried at The Woodlands Cemetery in West Philadelphia. 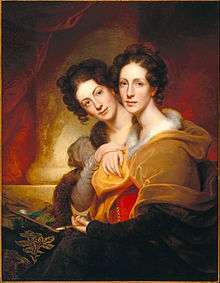 Exhibited and discussed in "In Pursuit of Fame: Rembrandt Peale 1778-1860," Washington D.C., National Portrait Gallery, Smithsonian institution, 1992 - 1993, The portrait of Margaret Irvine Miller exemplifies Peale's ability to convey a story and capture character through taking liberty with the way in which he portrayed his sitters. Mrs. Miller, by birth working class, later raised her position in Philadelphia society. Though her clothing is aristocratic, Mrs. Miller's pose and gaze are those of a straightforward, working class woman. The subtle juxtaposition is masterfully captured.

In 1801, Peale painted a portrait of his brother Rubens, youngest of the six Peale children, who always had an admiration for gardening and tending to natural life. Peale seated his brother next to a geranium. The painting signifies the artist’s admiration for a sibling’s love of nature, and may have been inspired by the Dutch 17th-century artist, David Teniers the Younger, who had painted a series of oil-on-copper paintings representing the five senses. His painting, "Smell" is quite similar to Rembrandt Peale’s. Rembrandt's piece captures the essence of a young gardener/artist’s peace of mind, gracefully looking out, a posture of wonder and calmness.[10] 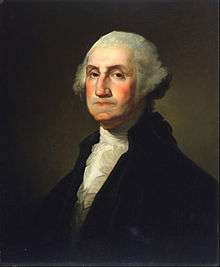 In 1824, Peale painted the Patriæ Pater, in which a rectangle supporting an oval wreath surrounds the eye-catching image of George Washington. The most successful painting of Peale's 50-year career, it inspired John Marshall to have his portrait done by Peale in the same fashion. The painting was criticized as lacking authenticity, as it was not completed until after Washington's death (1799). Nonetheless, Peale received commendations for his portrait by many noted politicians such as Washington’s nephew, Judge Bushrod Washington, who was an associate U.S. Supreme Court Justice, and Marshall.[11]

Peale's neoclassical painting The Roman Daughter depicts a young girl shielding her father, a prisoner in chains, and feeding him from her breast. This piece demonstrates compassion and graceful defense; his copy of Correggio's Angel, and his immense allegorical painting, Court of Death (1820), reveal the same artistic style.

Rembrandt Peale completed more than 600 paintings. He painted portraits of many notable people, including American presidents George Washington and Thomas Jefferson,[12] Chief Justice John Marshall,[13] and John C. Calhoun. His paintings are in many public collections. 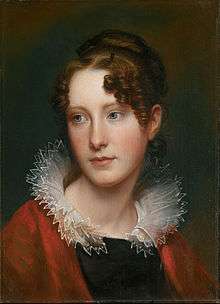 Portrait of Rosalba Peale (1820). Part of the collection of the Smithsonian American Art Museum. 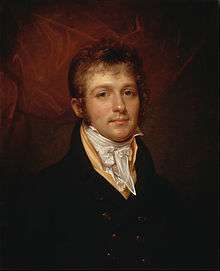 The following is a partial list of collections holding works by Rembrandt Peale:

A painting of a comedian who was an acquaintance of the British painter George Clint—an artist whose style resembled Peale's, and who claimed the picture as his own—was examined by the National Portrait Gallery of London in 1914. It was initially confirmed as Clint’s artwork. Later, the gallery further examined the history behind the painting: the English comedian, Charles Mathews, had arrived in New York in 1822, and left shortly after Peale had welcomed him for a portrait painting.[15]