Not to be confused with Brooklyn Children's Museum. 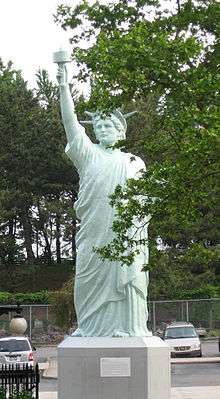 Replica of the Statue of Liberty in back lot.

The Brooklyn Museum is an art museum located in the New York City borough of Brooklyn. At 560,000 square feet (52,000 m2), the museum is New York City's third largest in physical size and holds an art collection with roughly 1.5 million works.[2]

Located near the Prospect Heights, Crown Heights, Flatbush, and Park Slope neighborhoods of Brooklyn and founded in 1895, the Beaux-Arts building, designed by McKim, Mead and White, was planned to be the largest art museum in the world. The museum initially struggled to maintain its building and collection, only to be revitalized in the late 20th century, thanks to major renovations. Significant areas of the collection include antiquities, specifically their collection of Egyptian antiquities spanning over 3,000 years. African, Oceanic, and Japanese art make for notable antiquities collections as well. American art is heavily represented, starting at the Colonial period. Artists represented in the collection include Mark Rothko, Edward Hopper, Norman Rockwell, Winslow Homer, Edgar Degas, Georgia O'Keeffe, and Max Weber. The museum also has a "Memorial Sculpture Garden" which features salvaged architectural elements from throughout New York City.[2]

Opened in 1897, the Brooklyn Museum building is a steel frame structure encased in classical masonry, designed by the famous architectural firm of McKim, Mead, and White and built by the Carlin Construction Company. The initial design for the Brooklyn Museum was four times as large as the actualized version; actualized plans reflect a compromise to the specifications of the New York City government.[4] Daniel Chester French, the noted sculptor of the Lincoln Memorial, was the principal designer of the pediment sculptures and the monolithic 12.5-foot (3.8 m) figures along the cornice. The figures were created by 11 sculptors and carved by the Piccirilli Brothers. French also designed the two allegorical figures Brooklyn and Manhattan currently flanking the museum's entrance, created in 1916 for the Brooklyn approach to the Manhattan Bridge, relocated to the museum in 1963.

By 1920, the New York City Subway reached the museum with a subway station; this greatly improved access to the once-isolated museum from Manhattan and other outer boroughs.

Thomas S. Buechner became the museum's director in 1960, making him one of the youngest directors in the country. Buechner oversaw a major transformation in the way the museum displayed art and brought some one thousand works that had languished in the museum's archives and put them on display. Buechner played a pivotal role in rescuing the Daniel Chester French sculptures from destruction due to an expansion project at the Manhattan Bridge in the 1960s.[5]

The Brooklyn Museum changed its name to Brooklyn Museum of Art in 1997, shortly before the start of Arnold L. Lehman's term as director. On March 12, 2004, the museum announced that it would revert to its previous name. In April 2004, the museum opened the James Polshek-designed entrance pavilion on the Eastern Parkway façade.[6] In September 2014, Lehman announced that he was planning to retire around June 2015.[7] In May 2015, Creative Time president and artistic director Anne Pasternak was named the Museum's next director; she assumed the position on September 1, 2015.[8]

The Brooklyn Museum, along with numerous other New York institutions, including the Metropolitan Museum of Art, the American Museum of Natural History, and the Brooklyn Botanic Garden, is part of the Cultural Institutions Group (CIG). Member institutions occupy land or buildings owned by the City of New York and derive part of their yearly funding from the City. The Brooklyn Museum also supplements its earned income with funding from Federal and State governments, as well as with donations by individuals and organizations.

In 1999, the museum hosted the Charles Saatchi exhibition Sensation, resulting in a court battle[9] over New York City's municipal funding of institutions exhibiting controversial art, eventually decided in favor of the museum on First Amendment grounds.[10][11][12]

In 2005, the museum was among 406 New York City arts and social service institutions to receive part of a $20 million grant from the Carnegie Corporation, made possible through a donation by New York City mayor Michael Bloomberg.[13][14]

The museum is the site of the annual Brooklyn Artists Ball which has included celebrity hosts such as Sarah Jessica Parker and Liv Tyler.[15]

The Brooklyn Museum exhibits collections that seek to embody the rich artistic heritage of world cultures. The museum is well known for its expansive collections of Egyptian and African art, in addition to 17th-, 18th-, 19th-, and 20th-century paintings, sculpture, and decorative arts throughout a wide range of schools.

In 2002, the museum received the work The Dinner Party, by feminist artist Judy Chicago, as a gift from The Elizabeth A. Sackler Foundation. Its permanent exhibition began in 2007, as a centerpiece for the museum's Elizabeth A. Sackler Center for Feminist Art. In 2004, the Brooklyn Museum featured Manifest Destiny, an 8-by-24-foot (2.4 m × 7.3 m) oil-on-wood mural by Alexis Rockman that was commissioned by the museum as a centerpiece for the second-floor Mezzanine Gallery and marked the opening of the museum's renovated Grand Lobby and plaza.[16][17] Other exhibitions have showcased the works of various contemporary artists including Patrick Kelly, Chuck Close, Denis Peterson, Ron Mueck, Takashi Murakami, Mat Benote,[18] Kiki Smith, Jim Dine, Robert Rauschenberg, Ching Ho Cheng, Sylvia Sleigh, Arvo Györköny and William Wegman, and a 2004 survey show of work by Brooklyn artists, Open House: Working in Brooklyn.[19]

In 2008, curator Edna Russman announced that a third of the Coptic art held in the museum's collection—second-largest in North America—is fake. Of 30 works of art, Russman believes 10 are faked. The fake artworks will be displayed in an exhibition starting in 2009.[20]

The Brooklyn Museum has been building a collection of Egyptian artifacts since the beginning of the twentieth century, incorporating both collections purchased from others, such as that of American Egyptologist Charles Edwin Wilbour, whose heirs also donated his library to become the museum's Wilbour Library of Egyptology, and objects obtained during museum-sponsored archeological excavations. The Egyptian collection includes objects ranging from statuary, such as the well-known "Bird Lady" terra cotta figure, to papyrus documents (among others the Brooklyn Papyrus).[21]

The Egyptian, Classical, and Ancient Near Eastern collections are housed in a series of galleries in the Museum. Egyptian artifacts can be found in the long-term exhibit, Egypt Reborn: Art for Eternity, as well as in the Martha A. and Robert S. Rubin Galleries. Near Eastern artifacts are located in the Hagop Kevorkian Gallery.[21]

Selections from the Egyptian collection 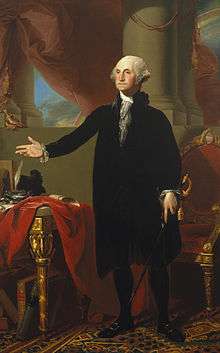 Works from the American Art collection can be found in various areas of the museum, including in the Steinberg Family Sculpture Garden and in the exhibit, American Identities: A New Look, which is contained within the museum's Visible Storage ▪ Study Center.[23]

Selections from the American collection

The oldest acquisitions in the African art collection were collected by the museum in 1900, shortly after the museum's founding. The collection was expanded in 1922 with items originating largely in what is now the Democratic Republic of the Congo. In 1923 the museum hosted one of the first exhibitions of African art in the United States.

With more than 5,000 items in its collection, the Brooklyn Museum boasts one of the largest collections of African art in any American art museum. Although the title of the collection suggests that it includes art from all of the African continent, works from Africa are sub-categorized among a number of collections. Sub-Saharan art from West and Central Africa are collected under the banner of African Art, while North African and Egyptian art works are grouped with the Islamic and Egyptian art collections, respectively.

The African art collection covers 2,500 years of human history and includes sculpture, jewellery, masks, and religious artifacts from more than 100 African cultures. Noteworthy items in this collection include a carved ndop figure of a Kuba king, believed to be among the oldest extant ndop carvings, and a Lulua mother-and-child figure.[24]

Selections from the African collection

Arts of the Pacific Islands

The museum's collection of Pacific Islands art began in 1900 with the acquisition of 100 wooden figures and shadow puppets from New Guinea and the Dutch East Indies (now Indonesia); since that base, the collection has grown to encompass close to 5,000 works. Art in this collection is sourced to numerous Pacific and Indian ocean islands including Hawaii and New Zealand, as well as less-populous islands such as Rapa Nui and Vanuatu. Many of the Marquesan items in the collection were acquired by the museum from famed Norwegian explorer Thor Heyerdahl.[25]

Art objects in this collection are crafted from a wide variety of materials. The museum lists "coconut fiber, feathers, shells, clay, bone, human hair, wood, moss, and spider webs"[25] as among the materials used to make artworks that include masks, tapa cloths, sculpture, and jewellery.

Arts of the Islamic World

The museum also has art objects and historical texts produced by Muslim artists or about Muslim figures and cultures.[26]

Selections from the Islamic World Collection

The museum's center for feminist art opened in 2007; it is dedicated to preserving the history of the movement since the late 20th century, as well as raising awareness of feminist contributions to art, and informing the future of this area of artistic dialogue. Along with an exhibition space and library, the center features a gallery housing a masterwork by Judy Chicago, a large installation called The Dinner Party (1974-1979).[27]

Selections from the European collection

In 2000, the Brooklyn Museum started the Museum Apprentice Program in which the museum hires teenage high schoolers to give tours in the museum's galleries during the summer, assist with the museum's weekend family programs throughout the year, participate in talks with museum curators, serve as a teen advisory board to the museum, and help plan teen events.

The museum has posted many pieces to a digital collection online which features a user-based tagging system that allows the public to tag and curate sets of objects online, as well as solicit additional scholarship contributions.[32]

James Tissot, The Disciples Having Left Their Hiding Place Watch from Afar in Agony, c. 1886-1894

The New York Times attributed this drop partially to the policies instituted by current director Arnold Lehman, who has chosen to focus museum energy on "populism", with exhibits on topics such as "Star Wars movies and hip-hop music"[33] rather than on more classical art topics. Lehman had also brought more controversial exhibits, such as a 1999 show that included Chris Ofili's infamous dung-decorated The Holy Virgin Mary, to the museum.[34] According to the Times:

"The quality of their exhibitions has lessened", said Robert Storr, the dean of the Yale University School of Art and a Brooklynite. 'Star Wars' shows the worst kind of populism. I don’t think they really understand where they are. The middle of the art world is now in Brooklyn; it's an increasingly sophisticated audience and always was one."[33]

On the other hand, Lehman points out that the demographics of museum attendees are showing a new level of diversity. According to The New York Times, "the average age [of museum attendees in a 2008 survey] was 35, a large portion of the visitors (40 percent) came from Brooklyn, and more than 40 percent identified themselves as people of color." Lehman asserts that the museum's interest is in being welcoming and attractive to all potential museum attendees, rather than simply amassing large numbers of them.[35]