An 1898 £1 revenue stamp of Western Australia 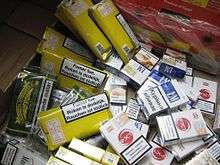 A revenue stamp, tax stamp or fiscal stamp is a (usually) adhesive label used to collect taxes or fees on documents, tobacco, alcoholic drinks, drugs and medicines, playing cards, hunting licenses, firearm registration, and many other things. Typically businesses purchase the stamps from the government, and attach them to taxed items as part of putting the items on sale, or in the case of documents, as part of filling out the form.

Revenue stamps often look very similar to postage stamps, and in some countries and time periods it has been possible to use postage stamps for revenue purposes. 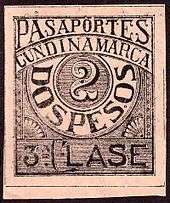 An 1899 passport tax stamp from Cundinamarca in Colombia

Revenue stamps are stamps used to collect taxes and fees. They are issued by governments, national and local, and by official bodies of various kinds. They take many forms and may be gummed and ungummed, perforated or imperforate, printed or embossed, and of any size. In many countries, they are as detailed in their design as much as banknotes; they are often made from the same type of paper. The high value of many revenue stamps means that they may contain security devices to prevent counterfeiting.

The Revenue Society has defined revenue stamps as " ...stamps, whether impressed, adhesive or otherwise, issued by or on behalf of International, National or Local Governments, their Licensees or Agents, and indicate that a tax, duty or fee has been paid or prepaid or that permission has been granted."[1]

In the Ottoman empire, Damga resmi was already in use by the sixteenth century. Records of tax revenue from stamps for silk provide evidence of changes in silk production over time.[2]

The use of revenue stamps goes back further than that of postage stamps (first used in 1840); the stamps of the Stamp Acts of the 18th century were revenues.[3] Their use became widespread in the 19th century, partly inspired by the success of the postage stamp, and partly motivated by the desire to streamline government operations, the presence of a revenue stamp being an indication that the item in question had already paid the necessary fees. Revenue stamps have become less commonly seen in the 21st century, with the rise of computerization and the ability to use numbers to track payments accurately.

There are a great many kinds of revenue stamps in the world, and it is likely that many remain unrecorded. Both national and local entities have issued them. Governments have sometimes combined the functions of postage and revenue stamps. In the former British Empire, such stamps were often inscribed "Postage and Revenue" to reflect their dual function. Other countries have simply allowed revenue stamps to be used for postage or vice versa. A revenue stamp authorized subsequently for postal use is known as a postal fiscal. Bhutan, for instance, authorized the use of revenue stamps for postal purposes from 1955 until the first proper postage stamps of the country were issued in 1962. In the Stanley Gibbons catalog, this type of stamp has an F prefix.[4] 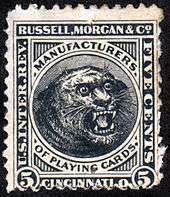 An American revenue stamp for the tax on playing cards

While revenue stamps often resemble postage stamps, they are not normally intended for use on mail and therefore do not receive a postal cancellation. Some countries such as Great Britain have issued stamps valid for both postage and revenue, but this practice is now rare. Many different methods have been used to cancel revenue stamps, including pen cancels, inked handstamps, perforating, embossing, hole punching or simply tearing.

From around 1900, United States revenue stamps were required to be mutilated by cutting, after being affixed to documents, and in addition to being cancelled in ink. A class of office equipment was created to achieve this which became known as "stamp mutilators".[5][6]

Revenue stamps were once widely collected by philatelists and given the same status as postage stamps in stamp catalogues and at exhibitions. After World War One, however, they declined in popularity, possibly due to being excluded from catalogues as the number of postage stamps issued rose rapidly and crowded revenues out.

The lowest point in revenue philately was during the middle years of the twentieth century. A Stanley Gibbons children's stamp album from the 1950s warned in its introduction: "Since Philately is the collecting of stamps that are employed in connection with the Posts, do not put in your album fiscals, telegraph stamps, tobacco-tax labels and other such strange things as are often found in some collections."[7] This is not a definition of philately that would be recognised today.

More recently, revenue philately has become popular again and now has its own FIP (Fédération Internationale de Philatélie) Commission and is an approved category in FIP endorsed stamp exhibitions.[8]

Many catalogues have been issued by specialist publishers and dealers but revenue stamps still do not feature in some of the most popular catalogues, for instance by Stanley Gibbons and Michel, unless they are revenue and postage stamps. However, both the standard Scott and the Scott Specialised United States catalogue feature US revenue stamps. The leading catalogue for revenue stamps of the United Kingdom, the British Commonwealth and several European countries is the Barefoot Catalogue.

Some types of revenue stamps 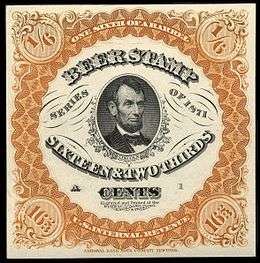 One of the earliest uses of revenue stamps was to pay Court Fees. Stamps were used in the Indian feudal states as early as 1797, almost 50 years before the first postal stamps.[9]

Although India is only one of several countries that have used tax stamps on legal documents, it was one of the most prolific users. The practice is almost entirely stopped now, partly due to the prevalence of forgeries which cost the issuing government revenue.[10]

The tax on documents, also commonly known as stamp duty, is one of the oldest uses of revenue stamps, probably being invented in Spain, and introduced (or re-invented) in the Netherlands in the 1620s, then reaching France in 1651 and England in 1694.[11] Governments enforce the payment of the tax by making unstamped documents unenforcable in court. The tax has been applied to contracts, tenancy agreements, wills etc. A pre-printed revenue stamp appeared on many hundis of India.[12]

In many countries, tobacco and alcohol are taxed by the use of excise stamps. For instance, the producer may buy stamps from the government which are then affixed to each bottle of alcohol or packet of cigarettes to show that tax has been paid. Often the stamp will be fixed across a seal so that on opening the pack or bottle the stamp is destroyed.[13]