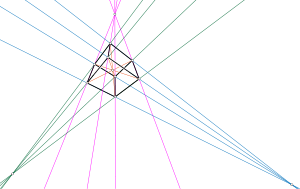 The Reye configuration can be realized in three-dimensional projective space by taking the lines to be the 12 edges and four long diagonals of a cube, and the points as the eight vertices of the cube, its center, and the three points where groups of four parallel cube edges meet the plane at infinity. Two regular tetrahedra may be inscribed within a cube, forming a stella octangula; these two tetrahedra are perspective figures to each other in four different ways, and the other four points of the configuration are their centers of perspectivity. These two tetrahedra together with the tetrahedron of the remaining 4 points form a desmic system of three tetrahedra.

Aravind (2000) pointed out that the Reye configuration underlies some of the proofs of the Bell–Kochen–Specker theorem about the non-existence of hidden variables in quantum mechanics.

The Pappus configuration may be formed from two triangles that are perspective figures to each other in three different ways, analogous to the interpretation of the Reye configuration involving desmic tetrahedra.