Richard Paul Kiley (March 31, 1922 – March 5, 1999) was an American stage, television, and film actor. He is best known for his distinguished theatrical career in which he twice won the Tony Award for Best Actor In A Musical.[1] Kiley created the role of Don Quixote in the original 1965 production of the Broadway musical Man of La Mancha and was the first to sing and record "The Impossible Dream", the hit song from the show. In the 1953 hit musical Kismet, he played the Caliph and was one of the quartet introducing the song "And This Is My Beloved". Additionally, he won three Emmy Awards and two Golden Globe Awards during his 50-year career[2] and his "sonorous baritone"[3] was also featured in the narration of a number of documentaries and other films. At his death, Kiley was described as "one of theater's most distinguished and versatile actors" and as "an indispensable actor, the kind of performer who could be called on to play kings and commoners and a diversity of characters in between."[2]

Kiley was born in Chicago, Illinois, and raised Roman Catholic. He graduated from Mt. Carmel High School in 1940, and after a year at Loyola University Chicago[4] he left to study acting at Chicago's Barnum Dramatic School. In the late 40s, he performed in Chicago-area summer stock theaters with actors such as Alan Furlan.[5] Following his service in the United States Navy in World War II, he returned to Chicago working as an actor and announcer on radio before moving to New York City. In New York he studied singing with Ray Smolover.[6] 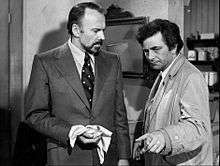 His work on stage included Kismet; No Strings – which was Richard Rodgers's first stage musical (after the death of Oscar Hammerstein II) in which Rodgers wrote both music and lyrics; the Buddy Hackett vehicle I Had a Ball; and the lead roles in Redhead, Man of La Mancha, and the play The Incomparable Max.

He starred in the television play, Patterns, which aired live on January 12, 1955. It caused a sensation, and won an Emmy for its writer, Rod Serling. He played the role of role of John Malcolm Patterson, future Attorney General of Alabama (and later Governor of Alabama), in the 1955 film The Phenix City Story.

He won Tony Awards for Best Actor in a Musical for Redhead, in 1959, and Man of La Mancha, in 1966. The dual role of the middle-aged Miguel de Cervantes and Don Quixote is one of the few musical roles which entails both the role of the leading man and that of a character actor at the same time, rather than the conventional handsome hero who wins the girl. Kiley had gone on record as saying that he had grown tired of the regular "leading man" role but was always grateful for having been given the chance to play it.

Kiley won three Emmy Awards and two Golden Globe Awards for his work in television. He won both an Emmy and Golden Globe awards for The Thorn Birds (as Paddy, Rachel Ward's father) (1983) and A Year in the Life (1986, 1987–1988). His third Emmy win was for Guest Actor in a Drama Series, for an episode of Picket Fences.

Kiley often narrated documentaries on PBS and other TV channels. In Jurassic Park, Kiley's voice is used to narrate the park's vehicle tour. Kiley was introduced as the narrator for the tour first in the novel by Michael Crichton, and later in the film adaptation by Steven Spielberg where the owner of the park said he "spared no expense" hiring Kiley. Visitors to Universal's Islands of Adventure theme park in Orlando, Florida, and Universal Studios in Hollywood hear Kiley as the narrator of the Jurassic Park River Adventure ride.

In 1993, Christian filmmakers set out to make a Jesus film which would be a Word-for-Word of the Gospel. Kiley was chosen to do a narration style film as the Apostle Matthew in his latter days. He is seen doing many flashbacks as Matthew in the days when Jesus walked the Earth.

From 1994 until 1998, Kiley narrated the A&E documentary television series Mysteries of the Bible. His final acting role was in the 1999 TV movie Blue Moon, which debuted the month after his death.[7][8]

Kiley died of an unspecified bone marrow disease in Warwick, New York, on March 5, 1999, less than a month before he would have turned 77. He was survived by his wife and six children: sons David and Michael Kiley, and daughters Kathleen, Dorothea, Erin and Dierdre. His remains were interred in Warwick. The lights on Broadway theatres were turned off in his honor.