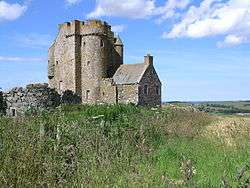 Robin Ian Evelyn Milne Stuart de la Lanne-Mirrlees (13 January 1925 – 23 June 2012) was an author and former officer of arms at the College of Arms in London.

He was born as Robin Ian Evelyn Grinnell-Milne in 1925. His father was Duncan Grinnell-Milne, and his step-aunt was the author Hope Mirrlees.[1] He was a godson of the 11th Duke of Argyll. He was educated at the English School of Cairo, and also in Paris. He attended Merton College, Oxford, matriculating in 1947 and taking a third class degree in PPE in 1949.[2] He undertook military service, rising to the rank of captain in the Royal Artillery. His heraldic career began on 17 May 1952 when he was appointed Rouge Dragon Pursuivant of Arms in Ordinary.[3] Later that year his name was changed to that listed above.[4]

In 1958 he adopted by deed poll the name of Robin Ian Evelyn Milne Stuart le Comte de La Lanne-Mirrlees.[5][6] He would hold this post of Rouge Dragon until December 1962, when he was promoted to the office of Richmond Herald of Arms in Ordinary.[7] He retired from this post in 1967.[8] During his time at the College of Arms, Milne Stuart de la Lanne-Mirrlees was perhaps best known for his correspondence with Ian Fleming. Fleming was doing research for his book On Her Majesty’s Secret Service.

In 1971 he bought and partly restored Inchdrewer Castle, near Banff in Aberdeenshire.[9]

In 1975, Milne Stuart de la Lanne-Mirrlees was recognized by the Lord Lyon King of Arms as Baron of Inchdrewer and Laird of Bernera.[10] He was also a Knight of Honour and Devotion of the Sovereign Military Hospitaller Order of St. John of Jerusalem of Rhodes and of Malta. In 1992, by a further deed poll, he adopted the name Robin Ian Evelyn Milne Stuart le Prince de la Lanne-Mirrlees.[11] In 2005, he began to assert his claim to a princely title bestowed on him by King Peter II of Yugoslavia.

After several years of ill health, he died at a nursing home in Stornoway, Scotland on 23 June 2012.

Count Robin played a large role in the development of the James Bond character. A Scottish aristocrat well known for wooing beautiful women, he worked with Ian Fleming on his book On Her Majesty's Secret Service and was the main inspiration for the characteristics of James Bond. In the story, James Bond's cover as genealogist Sir Hilary Bray was based on the Count's position as a heraldic researcher at the College of Arms in London.[12]