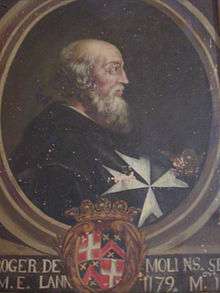 Roger de Moulins was Grand Master of the Knights Hospitaller from 1177 to his death in 1187, succeeding Jobert of Syria.

The Hospitallers were rivals of the Knights Templar, but Pope Alexander III persuaded Roger to make a truce with them in 1179. In 1184 he toured Europe with Arnold of Torroja, the Grand Master of the Templars, and Heraclius, the Latin Patriarch of Jerusalem, and established the Hospitaller Order in England, France and Germany. On his way back he helped the Normans attack Thessalonica in 1185.

During his time as Grand Master the Hospitallers became more involved in the politics of the Kingdom of Jerusalem. Roger opposed Raynald of Châtillon and Guy of Lusignan, and at first refused to hand over his key to the royal treasury when Guy was crowned King of Jerusalem in 1186. He took part in the raid against Saladin at Cresson near Nazareth on 1 May 1187, where he was killed by a lance-wound to the chest.

Roger was succeeded by William Borrel, who served as custodian of the Hospitallers for a brief time in 1187, and then by Armengol de Aspa, who served as provisor (custodian) until 1190. A new Grand Master was not chosen until Garnier of Nablus was elected in 1190 during the Third Crusade.