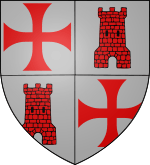 Arnold of Torroja's Coat of Arms

Arnold of Torroja (in Catalan, Arnau de Torroja) was a Spanish knight and the ninth Grand Master of the Knights Templar from 1181 until his death in 1184.

While no date of birth survives for Torroja, born in Solsona, Lleida he was very old at his death, being in excess of 70 years when he was elected as Grand Master.[1] He had served in the order for many years and was the Templar Master in both Crown of Aragon and Provence.[2]

Torroja's military career had mainly been focused on the Reconquista,[1] fighting Muslims for the Crown of Aragon and for Portugal but was principally active in Aragon.[2] His appointment as Grand Master was likely due to his image as an outsider i.e. an experienced Templar whose power base was outside the Holy Land.[2] This appealed to the order as the previous Grand Master Odo de St Amand had become embroiled in Jerusalem's politics but it did mean that Torroja was inexperienced in the "political situation of the Latin States".[1] He became the order's new leader in 1181.[2]

Conflict with the Hospitallers

During the Grand Master's reign the Knights Hospitaller reached a new peak in their influence. There had been rivalry between orders previously but factionalism in the face of renewed Muslim pressure was unacceptable. The two Grand Masters met for mediation with Pope Lucius III and King Baldwin IV and the problems were resolved.[1] In fact Torroja is recorded as a skilled diplomat himself acting as a mediator between several political groups in the East.[2] He also conducted successful peace negotiations with Saladin after raids by Raynald of Châtillon in Transjordan.[1]

In 1184, Torroja set out with Patriarch Heraclius and Grand Master Roger de Moulins of the Knights Hospitaller to gather European support for the Kingdom of Jerusalem.[1] They planned to visit Italy, England and France,[2] but he fell ill[1] and died at Verona on September 30, 1184.[2] He was succeeded as Grand Master by Gérard de Ridefort.[3]