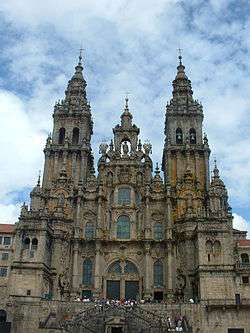 According to romans 15:28 in the Romans, Roman Catholicism and Christianity as whole began in Spain when St. Paul went to Hispania to teach the gospel there after visiting the Romans along the way. After 410 AD, Spain was taken over by the Visigoths who had been converted to Arian Christianity around 360. From the 5th to the 7th century, about thirty synods, were held at Toledo to regulate and standardize matters of discipline, decreed uniformity of liturgy throughout the kingdom. Medieval Spain was the scene of almost constant warfare between Muslims and Christians. This was the period of the so-called Golden age of Jewish culture in Spain. The Almohads, who had taken control of the Almoravids' Maghrebi and Andalusian territories by 1147, far surpassed the Almoravids in Islamic fundamentalism, and they treated the non-Muslim dhimmis harshly. Faced with the choice of death, conversion, or emigration, many Jews and Christians left.[1]

The Reconquista was the long process by which the Catholics reconquered Spain from Muslims by 1492. The Spanish Inquisition was established in 1478 to complete the religious purification of the Iberian Peninsula. In the centuries that followed, Spain saw itself as the bulwark of Catholicism and doctrinal purity. 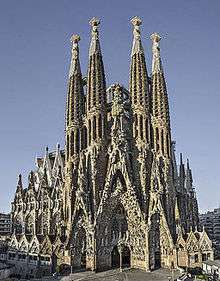 The Spanish Church oversees one of the greatest repositories of religious architecture (and art) in the world, among them the outstanding cathedrals of Cordoba (a former mosque), Santiago de Compostela, Burgos, León, Seville and Toledo, monasteries like San Millán, Silos, Monstserrat, Poblet or Las Huelgas, or churches like Sagrada Familia in Barcelona by Antoni Gaudí.

Holy Week (Spanish: Semana Santa) in Spain attracts thousands pilgrims and tourists alike. For centuries Holy Week has had a special significance in the church calendar in Spain, where early on Good Friday the darkened streets of dawn become the stage for solemn processions and celebrations that lead up to festivities of Easter Sunday. Fifty-eight processions (according to a 2008 guide) parallel the health and wealth of the city from the 16th and 17th centuries of its golden age to the French Invasion in the 18th century and finally to its rebirth today in the twentieth century. Despite church attendances falling, in common with the rest of Europe, the Easter processions are expanding, as many newly formed brotherhoods have asked for permission from bishops and other authorities to process during Holy Week.[2]

For over a thousand years, Europeans living north of the Alps have made their way to the closest place in Europe "where they could access the spiritual authority of an Apostle: Santiago de Compostela.".[3] In 2007, for example, over 100,000 people walked to Santiago de Compostela alone.[4]

There are over 42 million baptized, covering about 92% of the total population.[5] There are 70 dioceses and archdioceses. In spite of strong traditions, most Spaniards do not participate regularly in religious services. A study conducted in October 2006 by the Spanish Centre of Sociological Research[6] shows that of the Spaniards who identify themselves as religious, 54% hardly ever or never go to church (except for wedding and funerals), 15% go to church some times a year, 10% some time per month and 19% every Sunday or multiple times per week. A huge majority of young Spaniards, including those who self-identify as Catholic, ignore the Church's stance on issues such as pre-marital sex, sexual orientation or contraception.[7][8][9][10][11] The total number of parish priests has shrunk from 24,300 in 1975 to 19,307 in 2005. Nuns also dropped 6.9% to 54,160 in the period 2000-2005 (though compared to the United States with nearly 70 million Catholics and only 44 thousand priests and 50 thousand nuns, it is not severe).[12]

According to the Eurobarometer 69 (2008), another independent source, only 3% of Spaniards consider religion as one of their three most important values, while the European mean is 7%.[13]