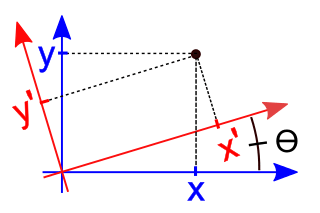 An xy-Cartesian coordinate system rotated through an angle

to an x'y'-Cartesian coordinate system

Coordinate systems are essential for studying the equations of curves using the methods of analytic geometry. To use the method of coordinate geometry, the axes are placed at a convenient position with respect to the curve under consideration. For example, to study the equations of ellipses and hyperbolas, the foci are usually located on one of the axes and are situated symmetrically with respect to the origin. If the curve (hyperbola, parabola, ellipse, etc.) is not situated conveniently with respect to the axes, the coordinate system should be changed to place the curve at a convenient and familiar location and orientation. The process of making this change is called a transformation of coordinates.[6]

The solutions to many problems can be simplified by rotating the coordinate axes to obtain new axes through the same origin.

The equations defining the transformation in two dimensions, which rotates the xy axes counterclockwise through an angle

into the x'y' axes, are derived as follows.

In the xy system, let the point P have polar coordinates

. Then, in the x'y' system, P will have polar coordinates

Equations (5) and (6) can be represented in matrix form as

which is the standard matrix equation of a rotation of axes in two dimensions.[8]

The inverse transformation is

after the axes have been rotated through the angle

The axes have been rotated counterclockwise through an angle of

and the new coordinates are

. Note that the point appears to have been rotated clockwise through

after the axes have been rotated clockwise 90°, that is, through the angle

The axes have been rotated through an angle of

, which is in the clockwise direction and the new coordinates are

. Again, note that the point appears to have been rotated counterclockwise through

The most general equation of the second degree has the form

Through a change of coordinates (a rotation of axes and a translation of axes), equation (9) can be put into a standard form, which is usually easier to work with. It is always possible to rotate the coordinates in such a way that in the new system there is no x'y' term. Substituting equations (7) and (8) into equation (9), we obtain

is selected so that

. The conic section is:

Generalizing to any finite number of dimensions, a rotation matrix

is an orthogonal matrix that differs from the identity matrix in at most four elements. These four elements are of the form

after the positive w axis has been rotated through the angle